Why Fashion Is Embracing the Free-Spirited Mod Look After Lockdown 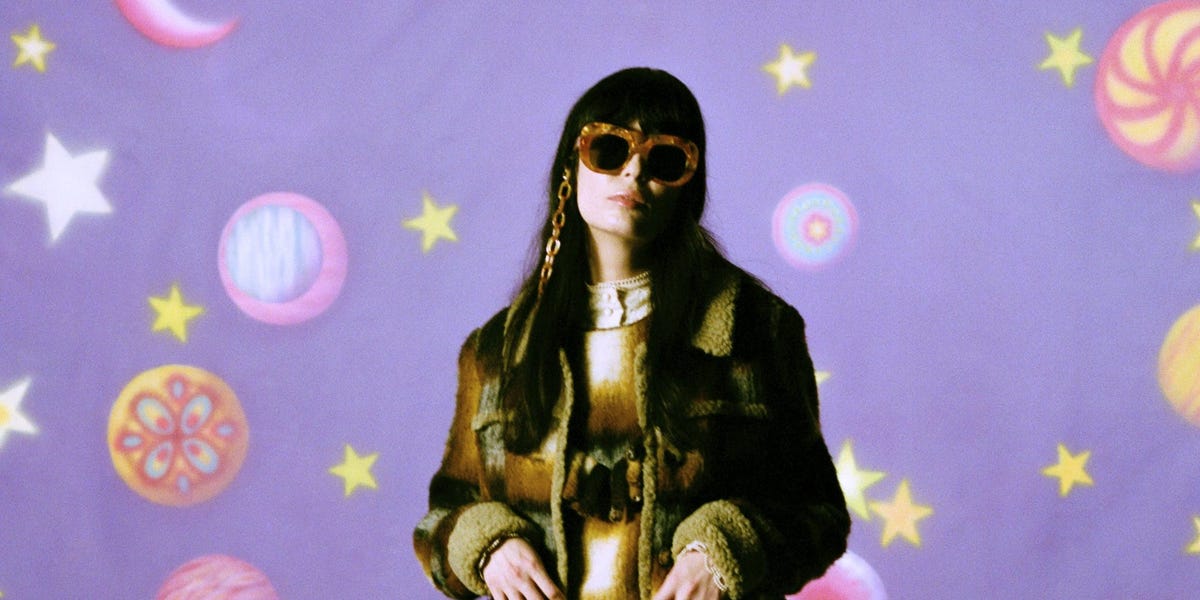 Psychedelic tunes fill the air, the purple backdrop is a patchwork of colorful stars and planets, and a model bats her exaggerated eyelashes at the camera. You could be forgiven for thinking you were watching a vintage movie, but this YouTube video is the fall/winter 2021 runway presentation by Anna Sui.

Sui isn’t the only designer who has embraced the sixties trend in 2021. Versace, Andrew Gn, and Dolce & Gabbana all sent mod silhouettes down their virtual runways.

From Versace’s colored tights to Dolce & Gabbana’s monochrome checks, the optimistic, hedonistic sixties vibe seems to be just what the world of fashion needs after 2020.

The mod culture began in 1960s England. The mods were the baby boomers — the children of the wartime generation. They were born into a time of conformity, austerity, and poverty, and when they became teenagers, they were ready to splurge.

Now in 2021, another generation is ready to set itself free, trend forecaster Katie Irving of the Moonshot Agency told Insider.

“The style of the sixties was the product of revolution and technology and both of those words describe our current environment once again,” Irving said.

Anna Sui echoed the sentiment in her runway notes: “As we wait ‘on pause’ for the new world that will emerge from this pandemic, my mind is awhirl with visions of the vibrant world that lies just ahead.”

Irving said TV shows like “The Queen’s Gambit,” which takes place from 1958-1968, may have helped fuel our love for mod fashion. She also said this could just be the start for retro styles.

“We will continue to see nostalgic fashion periods trend during this time of uncertainty and change as people continue to be drawn to the familiarity of the past,” Irving said.

Mod fashion and music have been long intertwined. The Italian Vespa- or Lambretta-riding mods would ride to nightclubs where they would dance the night away to jazz, American R&B, and then The Who. The popstars they listened to were often mods themselves.

The mod look first showed it was going to be the feel-good trend of 2021 when miniskirts appeared in spring/summer 2021 shows by Miu Miu and Isabel Marant. Models Kendall Jenner and Hailey Bieber arrived at an album launch wearing micro miniskirts, and pop queen Rihanna crowned the trend when she was papped in Santa Monica last month wearing a Rick Owens mini.

Mods not only broke the rules when it came to fashion, but make-up, too. A new generation of trendsetters is now embracing the trend in their own way, and much of it is being showcased on — where else? — TikTok.

Beauty addicts on TikTok are practicing the graphic floating crease and trying to keep shaky hands in check. They can create the look using the Haus of Mod collection from Lady Gaga’s makeup brand Haus Labs, and seek further inspiration from a video for Ariana Grande’s latest album, “Positions.”

A look for every season

While celebrities have embraced mod style for spring, designers have shown that it will also fill our wardrobes this fall.

Belgian designer Nicolas Di Felice marked his debut collection for Courrèges by leaning into the decade that made the brand famous. While the virtual presentation placed the collection in a post-pandemic world, Di Felice had clearly gone through the history books. He reimagined the looks that got its late founder André Courrèges noticed – the iconic white dress, cut-out dresses, and even white go-go boots.

Paris-based Singaporean designer Andrew Gn chose a bold palette for his Fall/Winter collection including bright vermilion, fuchsia, golden yellow, emerald green, and lilac, which he mixed with khaki and camel — a palette any mod would be familiar with. Donatella Versace also seemed inspired by the Wild Ones vibe as her fall/winter 2021 collection pays homage to the rebel spirit, freedom, and dance floor communities.

Celebrity fashion photographer Russel Wong told Insider that mod style has continued to appeal across the decades because it is a celebration of craftsmanship.

“That period is so defining, so well-crafted and so well designed,” said Wong. “Design will always stand the test of time.”