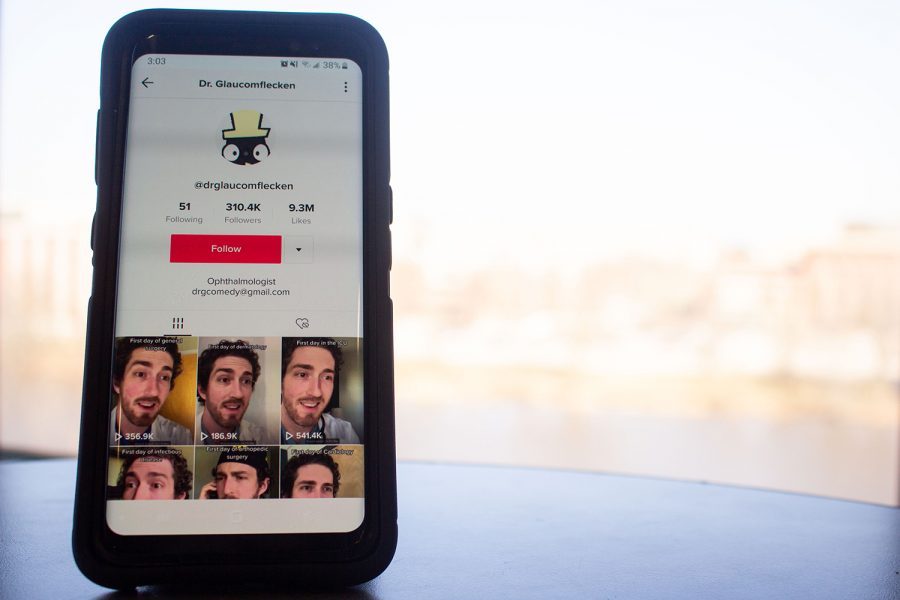 William Flanary, a former Ophthalmology resident at the University of Iowa, has gone viral on social media platform TikTok for making comedy videos about being a doctor.

A doctor who completed his ophthalmology residency through University of Iowa Health Care has gained fame on TikTok for making comedy videos about his work in the medical field.

William Flanary, or Dr. Glaucomflecken on TikTok, has gained over 300,000 followers from making these comedy videos.

Flanary graduated from Texas Tech University with his bachelor’s degree before attending Dartmouth College for medical school, and completing residency at UI Hospitals and Clinics. He currently works at EyeHealth Northwest in Portland, Oregon.

Flanary said he began making TikToks in April 2020, but he previously made comedy posts on Twitter. He joined TikTok when he felt that he had done all he could do on Twitter, he said.

“I feel like with Twitter alone, there is only so much that you can do,” Flanary said. “And then TikTok came along. So, I tried it out, and I loved it, because it allowed me to use my comedy in a different way.”

Flanary is an ophthalmologist, which is a doctor who specializes in eye care. Although this is his specialty, he said his TikToks focus on medicine as a whole, rather than just his field.

“I didn’t want to just stick with ophthalmology because it is such a small field,” Flanary said. “I like doing it this way as opposed to focusing on my own specialty, because it helps me reach a bigger audience. I like giving people an outlet and helping them to laugh in a difficult time. It’s nice to be able to do that for all of medicine rather than just in my tiny field.”

Flanary said he hopes his TikToks can make people laugh, as well as help students in medical school realize that being a doctor can be fun. He said there are people in the profession who make jokes and have a good time with their job.

“It helps people that already want to go into medicine, and who are already on that path,” Flanary said. “It helps them to feel better because they see that there are physicians out there that have fun, and that are enjoying medicine.”

Lucas Lenci, an ophthalmologist who also completed his residency at the UI and a good friend of Flanary, said Flanary has a gift for making often difficult and sad situations more joyful with his comedy.

“He cares about making a difference, but he also does it in a way that makes it enjoyable,” Lenci said. “He brings such a brevity to it, and if you add some of this comedy and this funny aspect to what you’re doing, it makes the tough times that much easier.”

Lenci said seeing the fun and lighthearted side of any profession in general, including the medical field, will make people naturally gravitate towards it.

UI freshman Jenna Girard, who is on the pre-med track, said she thinks these TikToks not only serve as a comfort for medical students, but will also help inspire the next generation of doctors.

“I think a lot of the time, the media portrays going through medical school as impossible,” Girard said. “I haven’t done that yet, but I think watching these TikToks shows you that there are different specialties and different ways of getting there. It shows that you don’t have to be the best student. Obviously, you have to work for it and want it, but it’s not impossible.”