The Magazine That Invented Street Style 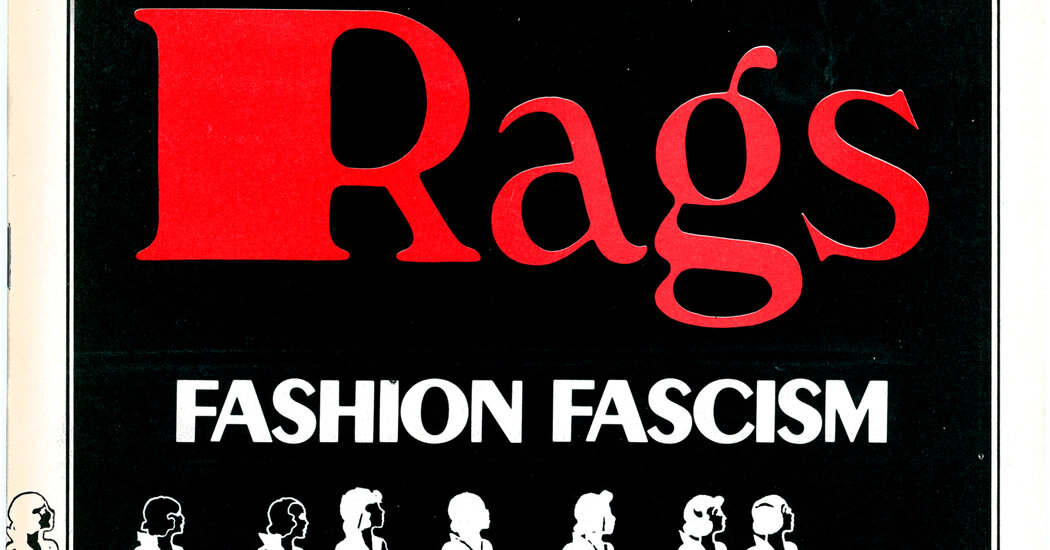 One of the most influential magazines most people have never heard of existed for the blink of a hair-covered eye in the Bay Area from 1970 to 1971.

The brainchild of a pair of editorial refugees from glossy-land and a Rolling Stone photographer, Rags was the first publication to identify street style as a discrete fashion sector and call out the establishment for trying to manufacture trends. You can draw a direct line from its birth to the work of Bill Cunningham (Rags had an “On the Street” photo section eight years before “On the Street” appeared in The New York Times) and such Instagram sensations as The Sartorialist and Tommy Ton.

Barbara Kruger was an art director before her work was shown at MoMA; R. Crumb did illustrations for the prototype before he created Fritz the Cat. Rags covered vintage fashion before Christie’s started its auctions, D.I.Y. fashion before D.I.Y. became a thing, and eco-fashion before it became upcycling.

And it predicted the splintering of the style dictatorship created by the collusion of high-fashion brands, haute department stores and magazines with names like Vogue, amid the rise of the host of subcultures and style tribes that exist today.

I know this not because I actually knew anything about Rags before this month, but because the Waverly Press has reissued all 13 issues in a limited-edition boxed set, along with special photographs, artifacts from the archives, and a paperback book featuring “The Best of Rags.”

For anyone wondering about how we got to here — a world where social media feeds are full of influencers who once upon a time were only people peacocking outside fashion shows and music festivals; a world where street wear refers to an actual vibrant, growing market sector, not just stuff you wear on the street — this is part of the answer.

This is why, when you mention the name Rags, despite the fact that most people give you a blank look, die-hard magazine folks (the kind of people who can go on and on about typefaces and layouts and haunt flea markets for obscure issues), start figuratively bouncing on their toes.

“Revolutionary,” said Stefano Tonchi, the global chief creative officer of L’Officiel, who said he had discovered the magazine while sifting through stands at the Rose Bowl market in Los Angeles, and bought the entire publication run.

Magazines occupy a funny place in our mental library. Not quite as ephemeral as newspapers (even the ones on newsprint) but not as forever as books, they arrive like monthly or weekly dispatches from friends, home to snippets of great writing and photography and illustration that sit somewhere at the nexus of reality and creativity because they are really about being creative with reality. They can be hard to throw away, but then they pile up and become hard to keep.

And they are increasingly discussed as an endangered species, at least in print — blink and it seems as if another publication has gone all-digital. Self, Glamour, Seventeen, Teen Vogue, Redbook, Vogue and other monthlies are in endless identity crises: No longer the conduit of what readers need to know nor fast-twitch enough to satisfy the digital maw, they are losing their reason for being.

But what a scan through the short but striking life of Rags makes clear is that magazines also serve to capture a moment not just in time, but also in shifting identity — are, in fact, perhaps better conceived to capture that elusive thing, the shift itself, than any other medium.

Founded by Baron Wolman (the chief photographer for Rolling Stone from 1967 to 1970, who financed Rags in part by selling his Rolling Stone stock), along with Mary Peacock (a former Harper’s Bazaar editor, and later fashion editor of The Village Voice) and Daphne Davis, Rags was a tabloid-size, bound newsprint publication that was positioned as the anti-Vogue.

It was born, like Rolling Stone, from the counterculture of the late 1960s and was created to chronicle and reflect its evolution — and celebrate it — smashing up politics and dress and the politics of dress with a sly sense of fun. Rags believed individual style was a serious business, but it never took it terribly seriously. To wit: the name.

As Mr. Wolman said in an interview with The New York Times not long after the magazine began: “Fashion for years has been trying to tell us to conform to its idea of what is beautiful — to become the Beautiful People. Now, individual creativity is what is beautiful.” Sound familiar?

Indeed, most of the content would not seem out of place today.

Feature subjects included a host of Warhol superstars as well as an analysis of Janis Joplin’s style and an interview with funk singer Betty Davis; fashion shoots involved tattoos, cowboys and the clergy. Rags road-tested nine brands of jeans by running over them with a VW Beetle, freezing them and bleaching them; it taught readers how to make a vest made from beer can pull tabs (it looked very Paco Rabanne). But perhaps its most famous issue was No. 5: “Fashion Fascism.”

This involved a deconstruction of attempts by Big Fashion (like Big Tobacco) to replace the miniskirt with the midi-skirt in order to get consumers buying again (and buying clothes that involved more fabric). This included offering saleswomen steep discounts on midi-skirts so that they’d model what they pushed, and enlisting glossy magazines and Women’s Wear Daily in the cause. It also included interviewing Marshal McLuhan on the meaning of the miniskirt.

Rags went out of business in a year, running out of money just as Levi’s was set to make a major ad buy. “One month too late!” Mr. Wolman said in an interview with Dazed.

And it might have stayed one of the many boundary-publishing magazines that disappeared into the slag heap of pop culture history until Dagon James, the founder and publisher of the Waverly Press, and Mr. Wolman (with whom he had created a number of photography books, including “Woodstock” in 2014 and “Jimi Hendrix” in 2018) began talking back in 2009 when the 40th anniversary of the magazine was looming. Not so much because of the milestone, Mr. James said, but because it has become clear that many of the currents that Rags had chronicled were not passing fads but actual cultural pivots.

It was 10 years later that they got serious about the project. Then, in the midst of the planning, Mr. Wolman learned he had A.L.S., also known as Lou Gehrig’s disease; he died in November, before the book was finished. For Mr. James, seeing the project through became both a calling and a gift.

Coincidentally, around the same time that the Rags reissues became available, a new magazine was introduced. (You can’t fault the optimism of the print world, even in the face of its own demise.)

Called Perfect, and founded by the superstylist Katie Grand, she of Prada and Marc Jacobs fame, the magazine is actually more like a monument: an eight-pound, hard-backed book with hundreds of glossy pages of ads and fashion shoots that practically dares you to throw it out or recycle it. In its weight and anti-disposability it’s the antithesis of everything Rags stood for, yet it also celebrates, in the words of Mr. Wolman, “individual creativity.”

And looking at the two of them together, it’s hard not to think that they contain a joint lesson. Great magazines don’t disappear. They just become … coffee-table books.