The go-to vaccine outfit? Dolly Parton set the style with a cold-shoulder top. 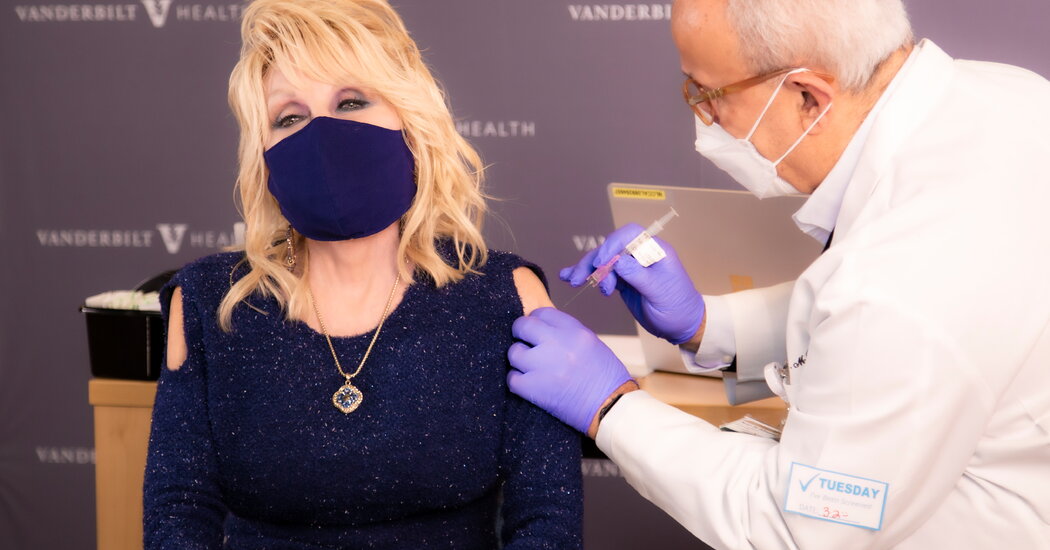 As millions of more Americans become eligible for the coronavirus vaccine, fashion-minded folks are giving extra consideration to what they will wear for their coveted appointments, and the emerging vaccine-ready top seems to be the cold-shoulder top, thanks to Dolly Parton.

On March 2, the 75-year-old country music star posted a four-minute video across her social media channels, getting her first shot of the Moderna vaccine at Vanderbilt Health in Tennessee.

“Dolly gets a dose of her own medicine,” she wrote on Instagram, a reference to the $1 million she donated last year for coronavirus vaccine research to Vanderbilt University Medical Center, which worked with Moderna.

For the occasion, she wore a sparkly navy blue knit top with cold-shoulder cutouts that was custom designed by her creative director, Steve Summers. “I even have a little cutout in my shirt — I matched it over here,” she told the doctor who administered the shot, pointing to her other shoulder.

Her choice kick-started a vaccine fashion moment. The cold-shoulder may not have seen this much action since the 1990s, when Donna Karan sent Linda Evangelista down a fall 1991 runway wearing a white one under a matching jacket. Women’s Wear Daily called it “silly,” but when Liza Minnelli wore a black version to the 1992 Oscars, followed by Candice Bergen to the Emmys (and then Hillary Clinton, in one of her early looks as the first lady), it struck a glamorously accessible chord. During the early 2000s, it was a staple of the so-called going-out-top trend, when night life held sway over fashion.

These days, the cold-shoulder has less to do with “going out” than the ease with which it allows wearers to be vaccinated. Lyst, the fashion search and shopping platform, has seen searches for cold-shoulder tops increase 21 percent since the start of March, according to a company spokeswoman.

When Wendy Brande, 53, a jewelry designer and activist in New York City, went to get vaccinated at the Javits Convention Center in New York City on March 5, she wore a black cold-shoulder sweater that she bought on eBay around 2005. “I just about fell over when I saw Dolly wearing one,” she said. “I knew I kept it for this moment.”

Apparently, she was not the only one. As she was receiving her Pfizer shot, the nurse told her: “Everyone’s wearing these tops.”