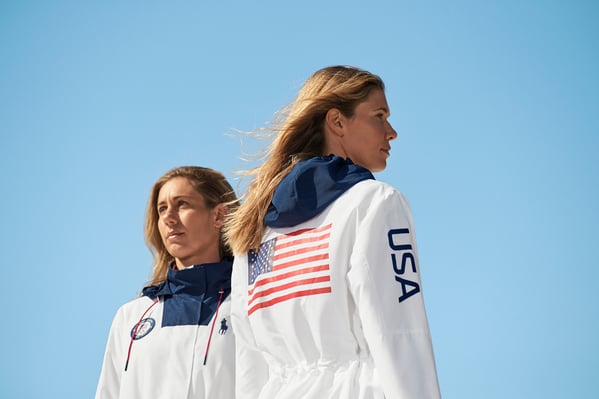 While the 2020 Olympics won’t lack for drama on the fields, on the courts or in the pools, a big question on many fans’ minds will be more fashion-forward: Who are you wearing?

When it comes to Team USA, the answer is: Ralph Lauren, but also… Kim Kardashian? Yep; the celebrity-turned-Skims founder will be supplying some of the skivvies that your favorite sports stars will sport in Tokyo this summer, while Lauren’s eponymous label is once again decking out America’s most elite athletes for the Olympics’ Opening and Closing Ceremonies.

Keep reading to find out more about Team USA’s designer duds, why this year’s uniforms are the eco-friendliest ever—and whether Team Canada has actually got America beat this year when it comes to killer streetwear.

In July, Ralph Lauren—which has designed Team USA’s ceremonial attire since the 2008 Olympics in Beijing—debuted their 2020 Opening Ceremony uniforms, which will be worn by more than 1,100 American athletes as they enter the Olympic Stadium in Tokyo. The unisex look features a navy blazer atop a blue-and-white striped T-shirt, paired with dark blue, slim-fit jeans. Completing the ensemble are a striped belt, flag-print, neckerchief-style scarf and white sneakers that also featured red, white and blue stripes.

We asked our athletes to describe what it feels like to step into the Stadium, as they prepare for the start of the Tokyo 2020 Gameshttps://t.co/OxXILN3IIW pic.twitter.com/MlI5a4m67U

Meanwhile, there is one athlete who will sport a different look during the Opening Ceremonies: Team USA’s yet-to-be-revealed flag bearer. That man or woman is scheduled to rock a white denim jacket design with super-innovative “cooling technology.” The back of the jacket features a round “cooling device” that, according to the label, “disperses heat from the wearer’s skin to optimize temperature.”

Related: Simone Biles Is 1! Here Are 30 More Reasons to Watch the 2021 Olympics

“Through the Olympic and Paralympic Games, Ralph Lauren celebrates America’s pioneering spirit, while embracing modernity and innovation—and it is with that ethos in mind that we approached the development of the RL COOLING technology” – @DavidLaurenhttps://t.co/OxXILN3IIW pic.twitter.com/gjuYqHnQDD

“Team USA’s 2020 Opening Ceremony Parade Uniform is a classic all-American look that incorporates sustainable materials within each piece,” the brand said in a statement. In fact, the belt is made from recycled plastic bottles, while the shirt is dyed with a special treatment solution (created by Dow) that allows less water and fewer energy to be used in the dyeing process. Plus, all of the garments were manufactured in the U.S. and even the cotton and wool were domestically grown.

Related: Everything You Need To Know About the 2021 Olympics, ‘The Games That Conquered COVID,’ Including How to Watch

First look at Ralph Lauren’s Team USA uniforms for the (delayed) 2020 Olympics. These are for the closing ceremony: pic.twitter.com/Dw06zGcUnu

So far, the reaction to Lauren’s looks has been… mixed. While some reporters have praised the clothing’s “crisp” look, others have called the uber-preppy ensembles “swagless” and “like an English schoolboy outfit.”

every four years ralph lauren does its best to dress up our greatest athletes in the most swagless outfits possible https://t.co/8SVdMTw2ts

This might be a hot take but I feel like Team USA should move on from POLO none of the opening ceremony fits feel very American to me, this is like an English schoolboy outfit https://t.co/ZUyvfQOcvo

Related: 125 Olympics Trivia Questions to Test Your Knowledge About the Winter and Summer Games

In June, Kardashian revealed that her Skims brand would be designing duds for female athletes’ downtime, as well as what they wear underneath their clothes. “Ever since I was 10 years old, I’ve heard every single detail about the Olympics from my stepdad,” Kardashian wrote on Instagram, referencing Olympic gold medalist Caitlyn Jenner, who was previously married to Kardashian’s mom, Kris Jenner. “When I received the call inviting Skims to be a part of Team USA, every moment I’ve spent admiring the strength and energy of the Olympians from the sidelines came full circle.”

What is the Canadian Olympic uniform?

Eh, we hear people have been curious about our Canadian tuxedos after the release of @TeamUSA‘s uniforms

Well you can all about our Tokyo 2020 kit here ➡️ https://t.co/ahIUBRTzhs pic.twitter.com/8hVSzRlOG5

Designed by iconic Canadian retailer Hudson’s Bay, the collection would look just as suitable for a day at the skate park as a day at an Olympic event, with graffitied denim jackets on top and white jeans on bottom—a look some have pointed out is basically a “Canadian tuxedo.”

Like Ralph Lauren’s apparel, Team Canada’s clothing is getting mixed reviews. GQ called them “the wrong kind of Canadian tuxedo,” while on his HBO show Last Week Tonight, John Oliver declared that the Canadian ensembles were “straight garbage.”

Well this is cool, I ended up on Last Week Tonight with John Oliver on HBO Sunday evening. It was a clip of @MelNakhavoly and I discussing the new Olympic team Canada outfits on @CityNews pic.twitter.com/9XF71jqzib

However, others think the fresh, iconoclastic feel is something that’s sorely lacking in international competition.

I’m late to the party on this, but the team Canada Olympic closing ceremony outfits are incredible. pic.twitter.com/jBwSa3Tyy1

Can I buy the Team USA belt made from soda bottles?

Where can I buy Team USA outfits?

Ralph Lauren’s entire line of Team USA apparel is available for purchase at RalphLauren.com or at TeamUSAShop.com, as well as in some Ralph Lauren stores. Even better, your purchases help fund the U.S. Olympic and Paralympic teams.

Yep! The collection just became available for purchase in mid-July at Skims.com, according to Kardashian’s social media.

Just Dropped: @SKIMS for Team USA. Our much anticipated collection is finally here! Support the United States female athletes participating in the Tokyo 2020 Olympic and Paralympic Games with our exclusive sleepwear and loungewear collection. Shop now at https://t.co/Qsy51S3rtD pic.twitter.com/s7q7p6Uayk

The 2020 Olympics (yes, they’re still being called that despite taking place in 2021!) kick off on Friday, July 23, with the Opening Ceremonies and will run through Sunday, August 8.

How to watch the 2020 Olympics

NBC will once again be the exclusive Olympics broadcaster on network television in the U.S., but you’ll also be able to catch coverage on NBC-owned cable channels like USA Network, CNBC and the NBC Sports Network, as well as on the NBC Sports app, on Peacock (which is NBC’s free streaming platform) and at NBCOlympics.com. (However, access to those platforms often means you need to be a paid subscriber to an NBC-partner satellite, cable or streaming service.) If you subscribe to Amazon Fire TV, Roku, Apple TV or Android TV, you should be able to connect to the official Olympic Channel app for free through your device or your platform’s mobile or phone app, at no extra charge and without a separate subscription.

Next, we ranked the 14 best Olympics movies of all time, just in time for the Tokyo Summer Games!