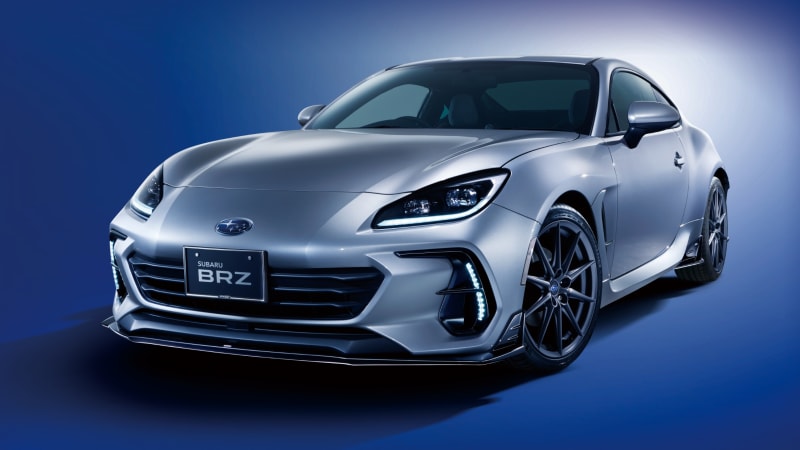 The Japan-market, 232-horsepower versions of the Toyota GR 86 and Subaru BRZ were announced jointly this morning. While the latter is visually the same as the 228-horsepower U.S.-market car unveiled in November, it was the first time Japan has seen its home-market spec. Immediately following the reveal, the boys in blue laid out some accessories and STI performance parts for their version of the car.

The images show a more aggressive BRZ equipped with aerodynamic upgrades. A lower front spoiler wraps the lower bumper, while the side intakes add LED fog lamps. Moving rearward, the rocker panels add a pair of small winglets right in front of the rear wheels.

From the rear view, we see a more substantial underbody spoiler and rally-style vortex generators along the trailing edge of the roof. The decklid also wears a thin spoiler in black. However, that appears to be swappable with a larger, touring-car-style wing made of carbon fiber and with a swan-neck design.

A set of Y-spoke wheels can help set the BRZ apart from its Toyota twin, which in production guise has the same wheels. They’re even finished in bronze, perhaps a subtle reminder of the gold wheels Subaru’s rally cars were known for. A side vent garnish and sport exhaust round out the offerings, this last grouping of which have been emblazoned with the STI logo, Subaru’s racing division may have had a hand in their design, but it’s more likely this is a version of the tS — or “tuned by STI” — trim than an all-out STI variant.

It should be noted that these parts are described as under development, and appear to be Japan-only, at least for now. A camouflaged 2022 BRZ equipped with some of these items was spotted testing at Fuji Speedway in December, drifting around turns and looking like a real fun time was had.

The parts help make up for the new BRZ’s toned-down look, adding a bit of fun to the more mature face. Toyota is almost certain to offer a group of tuning parts for the 86 under its Gazoo Racing or TRD brands. If a “friendly rivalry” was truly had against the 86’s development team as Toyota says, it’ll be interesting to see how Toyota responds.