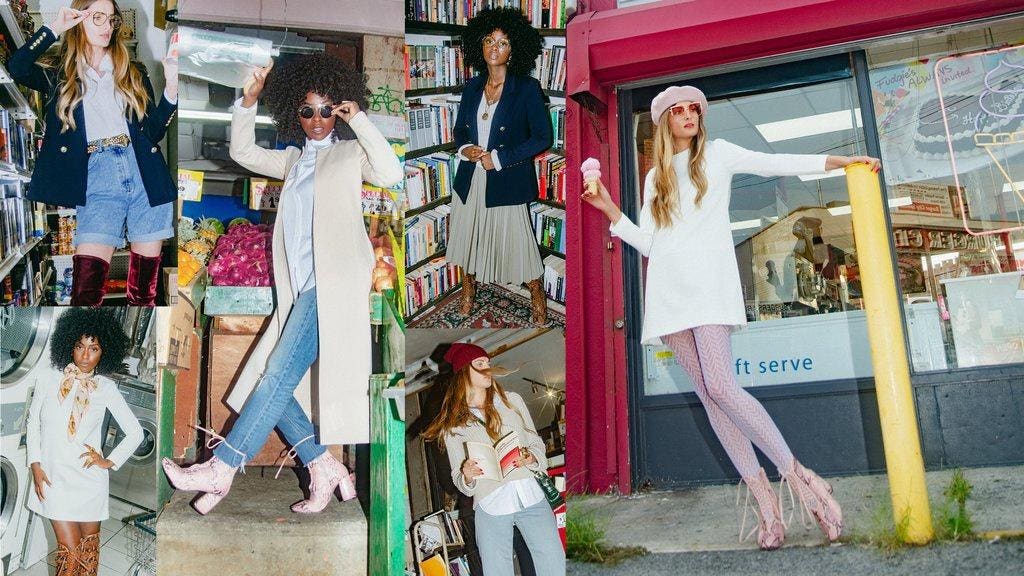 While athleisure ruled 2020, many are ready to emerge from the Winter (and the lockdown) this year in looks that are less sporty and more sophisticated. By offering fewer options that are designed with quality and versatility, a crop of fashion ventures believe that fewer, better options can actually create more looks with effortless style.

“Our mission is to reduce the overwhelm that a woman feels with the amount of options available to her,” says Diana LoMonaco, founder and designer of Classic Six. “How can we make the shopping experience less overwhelming in an age where options are endless and choice is exhausting?”

Launched during the height of the pandemic, the Classic Six capsule collection consists of just six items, “The Original Six,” that pair well with anything. From a double-breasted navy blazer to a cream shift dress that pays homage to 1960s British icon Twiggy, each piece has been designed to suit an array of occasions and non-occasions—from work, to a weekend walk to the farmer’s market. Just add your own white tee and jeans.

LoMonaco isn’t the only one in the capsule wardrobe game. Most notably, Misha Nonoo started her eponymous label in 2010 and has since grown a celebrity following. Originally launched as chic work-wear, the company recently expanded with maternity and plus-size lines. Meanwhile, Vetta Capsule, founded in 2016 by Cara Bartlett and Vanessa van Zyl, offers five-piece capsules in various styles, from casual to edgy.

LoMonaco says she aims to differentiate Classic Six by empowering the shopper to become her own perennial stylist, as the collection helps customers develop skills in layering and accessorizing. These techniques allow each item to flow through the seasons. “We are endlessly styling each piece to show her exactly how she can make this happen, so that when she checks out, she is not just checking out with an item, she is checking out fueled with the inspiration to get the most out of her purchase,” says LoMonaco.

She says another differentiator is the pace at which she will unveil each article of clothing. While the Original Six had to launch all at once during the 2020 pandemic, she says that in 2021 and going forward, she’s taking a slow, small-batch approach.

Just this week, Classic Six launched a pre-sale of three of the Original Six pieces in new Spring textiles. Meanwhile the fashion startup will unveil, gradually, six entirely new silhouettes throughout the summer, starting in May.

“We’ll launch two pieces every other month over the next six months inspiring shoppers to be more mindful of their purchases, all while encouraging the slow fashion movement,” she says.

For LoMonaco, Classic Six all started with a few simple sketches. She previously worked in advertising for contemporary private labels at Macy’s, and also ran two side hustles: fashion blogging and her own graphic design company.

“My blog was a flop, but in a way it served as a catalyst for Classic Six,” says the New York-based creative. “I was accumulating entirely too much stuff, and I craved the idea of having less…to have a wardrobe like European women whose closets consisted of fewer beautifully made timeless pieces that transcend time and seasons.” She created a capsule wardrobe for herself and turned to her mom, a professional seamstress, to help tailor the prototypes.

“I had these great pieces that were so easy to style in creative ways and wound up always feeling fresh. I thought I was onto something for sure,” she says.

This is when her second side-gig came in handy. “I have another business as a graphic designer, so I was basically going to use one business to pay for the other.” But income from her web business could only take her so far.

She got crafty with Instagram and e-mail marketing. With a limited marketing budget, she grew her mailing list from 200 to nearly 1,000 in less than a year via organic social media and influencer gifting. She also launched an email list for exclusive news about and access to the capsule collection. “I would offer followers a special price and a special gift for a limited time, and I would then use that money in pre-orders to pay for a portion of my production run.”

The pre-sale was a hit, but factory closures in China would bring another snag to her fledgling fashion business. She informed her inaugural customers, who were understanding during the pandemic. Despite the manufacturing freeze, she continued sharing her brand story on Instagram while shoppers were stuck at home.

“We launched before we even had product in stock in April 2020 as an opportunity to get in front of new consumers while they were home scrolling social,” she says. “It worked because by the time production began, people were excited and ready to shop,” she says.

While the solo entrepreneur is very early in her journey and has yet to hit $1 million in sales, she remains steadfast in her commitment to minimalist fashion. She selected a factory in China that focuses on reduced waste. And while she does not work exclusively with organic fabrics, she says the premise of her venture is less about the types of materials and more about curbing consumption for good.

“Right now the only real path to true sustainability is buying less,” says LoMonaco. And dry-cleaning less. Her line is entirely cold-machine washable and has collaborated with The Laundress to contribute to the sustainability dialogue.

Meanwhile, teaching consumers how to internalize the concepts of timeless style also remains core to her mission. In addition to the Twiggy dress, the other five Classic Six pieces are named after other style icons that have inspired the collection: Marilyn, Brigitte, Katharine, Donna, and of course, Jackie.