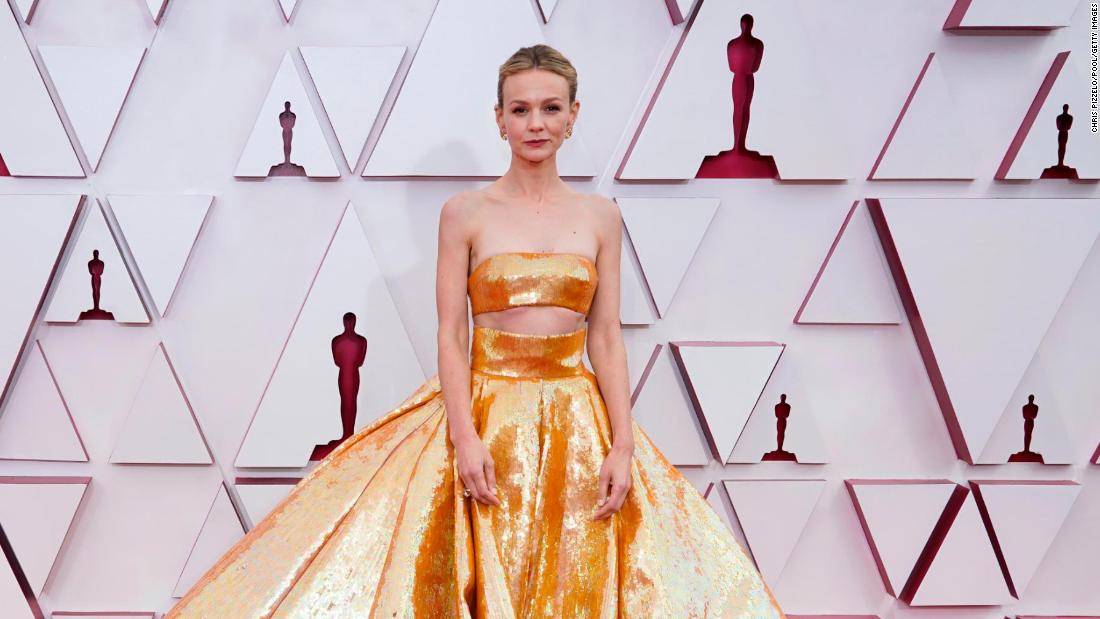 At a pandemic-era Oscars, it was never going to be business as usual on the red carpet.

But with a scaled back ceremony, organizers tried their very best to recapture the glamour that the showpiece event is known for. And the stars in attendance did their part, too, wearing an array of dramatic golds, reds and daring cutouts.

Usually held in February, the Oscars were pushed back by over two months in the hopes that loosening Covid-19 restrictions would allow for a more lavish affair. Indeed, with attendees not required to wear masks for the cameras, and eveningwear from some of fashion’s biggest names on display, there were glimpses of normalcy on the red carpet at the end of a largely virtual awards season.

The 93rd annual Academy Awards took place across two LA venues: the Dolby Theatre and Union Station, where up to 170 guests, nominees and presenters were permitted to gather.

Organizers eschewed a Zoom-centered event, meaning attendees have dispensed with the “waist up” fashion statements we’ve grown accustomed to in recent months. Instead, starswalked a socially distanced red carpet — albeit one that is far shorter than in previous years — where a small group of photographers awaited.

Chloé Zhao in Hermes on the red carpet prior to taking the Best Director gong for “Nomadland.” Credit: Matt Petit/A.M.P.A.S./Getty Images

While some kept things casual (like Best Director winner Chloé Zhao, who paired her high-collared dress with a pair of crisp white sneakers), most attendees relished the rare chance to dress up for the cameras by sporting bold colors and sparkling gowns.

Gold has always been a recurring theme on the Oscars red carpet, and the color was out in force Sunday evening. Among the most eye-catching was Andra Day in a Vera Wang dress and matching gold clutch, and Carey Mulligan, whose sequined Valentino two-piece exposed her midriff between a bandeau and ballgown skirt. Leslie Odom Jr., meanwhile, wore an all-gold Brioni suit and Questlove kept things fun in a pair of golden crocs.

A closeup on Questlove’s crocs on the red carpet. Credit: Chris Pizzello/AP

Zendaya veered away from gold and towards bright yellow, turning up in one of the night’s most talked-about looks. Custom-designed by Valentino’s creative director Pierpaolo Piccioli, the dress (which was named “Force de beaute” by the Italian label) took 300 hours to make and was paired with a reported $6 million’s worth of Bulgari diamonds.

Once considered something of a faux pas, a significant number of attendees also wore red on the carpet, from “Minari” star Yeri Han to Reese Witherspoon in Dior. “Mank” star Amanda Seyfried wowed in a showstopping red Armani Prive number as did Angela Bassett in an Alberta Ferretti gown with puffed sleeves and an outsized bow.

The evening’s trends did not all revolve around color, with cutout dresses also making frequent appearances on the red carpet. In addition to Zendaya and Andra Day’s aforementioned midriff-baring outfits, Best Actress nominees Vanessa Kirby and Carey Mulligan also opted for similar styles.

And Viola Davis went for a variation on the theme with her striking white Alexander McQueen gown — although her stylist revealed to British Vogue that the effect of cutouts had been produced by dying the corset underneath to match the actor’s exact skin tone.

When it came to menswear, there were a number of twists on traditional black-tie dressing amid the usual abundance of tuxedos. Nine-year-old “Minari” star Alan S. Kim stole hearts pairing his mini Thom Browne blazer with dress shorts and mismatched high socks, and Jon Batiste, whose soundtrack for Disney-Pixar’s “Soul” won the Oscar for Best Original Score, accessorized a classic Dior tuxedo with an outsized red flower on his lapel.

The “Sound of Metal” star chose a black on black suit by Prada. Credit: Chris Pizzello/AP

But there were fun flashes of color among the menswear choices, too — not least “Ma Rainey’s Black Bottom” co-star Colman Domingo, who turned up on the red carpet in a bright pink Versace suit embellished with 4,500 Swarovski crystals. (And though Brad Pitt kept things straightforward on stage to present the award for Best Supporting Actress in his usual sharp tailoring, he set social media alight with a haircut that led some to herald the return of the man bun.)

Though most eyes were on the LA red carpet, parallel events were staged in London and Paris for those unable to attend in person. At a London screening hosted by the British Film Institute, Olivia Colman continued the night’s red motif in an elegant high-necked design by Dior, while LaKeith Stanfield made a black Saint Laurent jumpsuit look effortlessly formal with a wide-collared white shirt and belt.

So while the awards still felt a world away from last year’s event, there was still plenty of pared-back elegance and sharp tailoring to be found on this most unusual of Oscars red carpets.

Scroll through the gallery above to see some of the best looks from the red carpet.