New York Fashion Week is back in person — masked and vaxxed 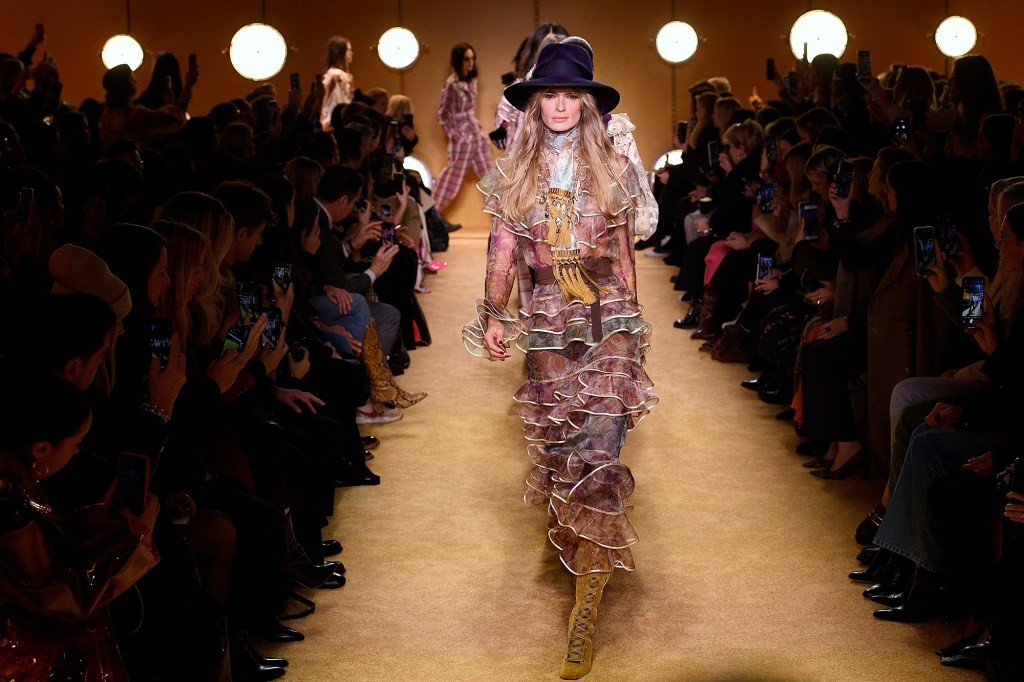 Fashionistas will be strutting all over the Big Apple this week for the first time in 18 months.

New York Fashion Week shows will take over Battery Park, the Rainbow Room, the streets of Soho and the Brooklyn Navy Yard among dozens of other venues drawing their usual coterie of influencers, leggy models, celebrities, and media.

But it will be a far more muted affair than in years past with the pandemic dictating everything from crowd and party sizes to how models’ hair and makeup is done.

The five-day event starting on Sept. 8, which typically draws 230,000 people to the city — generating $532 million in visitor spending — will be about half its usual size as its organizers take pains to ensure that the event is appropriate for the times.

That means most shows will be between 150 and 200 attendees — instead of the 500-plus audiences from the past — and most of the audience will be composed of industry professionals rather than friends of the designer and fans. Also missing will be the international press, buyers and models, some of whom are subject to the US travel ban.

“NYFW is not roaring back as hoped, but rather tiptoeing tentatively around the Delta variant, with a fair number of shows staying digital-only, and travel hesitancy and restrictions limiting attendance,” Fashion Law Institute founder and director Susan Scafidi told The Post.

Indeed, of the 119 shows that are on the official calendar, nearly a quarter remain digital-only, including Nicole Miller and Oscar de la Renta. Scores of shows, of course, are not listed on the calendar, but the designers who have decided not to produce a seated event reflect the ambivalence some are feeling about investing in a pricey runway event against the backdrop of a pandemic that’s not over yet.

Attendees will also need to prove they are vaccinated by downloading the Clear Health Pass app — though the paper CDC vaccination cards will be accepted in a pinch as well. A check-in rep who scans invitation bar codes will simply add the vaccination check to the process and be charged with informing attendees who have no proof to leave. Masks will be “strongly” encouraged, according to IMG, the show’s producer.

IMG isn’t dictating where people sit and how close they are to one another — meaning no decals like the ones in supermarkets that instruct shoppers which direction to walk and where to stand — but it is limiting the capacity at the shows.

“We recognize that we are not fully out of the pandemic and the designers told us they wanted to host between 150- and 200-person shows,” in the same large spaces used previously, Georgi Versi, IMG’s head of production at NYFW’s central hub, Spring Studios, told The Post.

Fashion insiders say they are simply happy to be attending a live show again after 18 months of watching them online to mixed reviews. Some worry the precautionary measures will put a damper on what is largely a performance that is selling fantasy and entertainment.

“Having to show vaccination cards and wear masks is appropriate and important,” NYFW founder Fern Mallis told The Post, but it will also “clearly change the energy at the show. People are approaching it with some reticence and concern about all the new protocols.”

The days of 500 to 1,000 attendees crammed around a narrow runway or after parties like Alexander Wang’s in 2019 at the defunct Henry Bendel space on Fifth Avenue –where so many people drifted in and out during the evening that an FDNY engine was parked outside the door — have been put on pause this year.

To be sure, some major soirees are planned, including a gala for the Metropolitan Museum’s Costume Institute on Sept. 13 — titled “In America A Lexicon of Fashion” — the hosts of which are tennis star Naomi Osaka, singer Billie Eilish and poet Amanda Gorman. A 100th birthday party for fashion dean Iris Apfel will take place at an undisclosed location that is also requiring rapid COVID-19 test for all attendees regardless of their vaccination status, according to sources who have been invited.

“There is always another layer to a show, a celebration at night, but very little of that is happening this year,” Owen Davidson, who runs event production agency, AO productions, told The Post.

In another nod to COVID-19, more shows and parties will be held outdoors, including the Nepalese designer Prabal Gurung’s show in Battery Park and the show for American designer Tori Burch, who is taking over the space just outside her new boutique on Mercer Street, according to sources and reports.

“Designers are creating shows that are taking COVID into account,” said Steven Kolb, chief executive of the Council of Fashion Designers of America, which produces the official calendar of NYFW. “Audience sizes will be cut in half and more-targeted and we’ll see more open-space shows.”

The rooftop space at Spring Studios in Tribeca — which can accommodate up to 400 people — is fully booked this year, Versi said.

NYFW also has strict protocols for its models and production teams backstage. They will be monitored by “COVID-19 compliance staff,” according to an IMG health and safety memo that was distributed to designers last month.

Hair and makeup tools have to be disposable and discarded after each use or sterilized, according to the memo, while capes may only be used once. All the clothing and shoes that models wear are kept bagged before and after use to “contain soft surface cross-contamination.” Large buffet-style spreads are verboten backstage and will be replaced with individually boxed meals.

Industry insiders say they can handle the strict requirements. “We are back in a challenging time,” said John Martinez of his eponymous fashion show production company. “But now that we have a face-to-face, live event, it’s all about being alive and joyful now.”