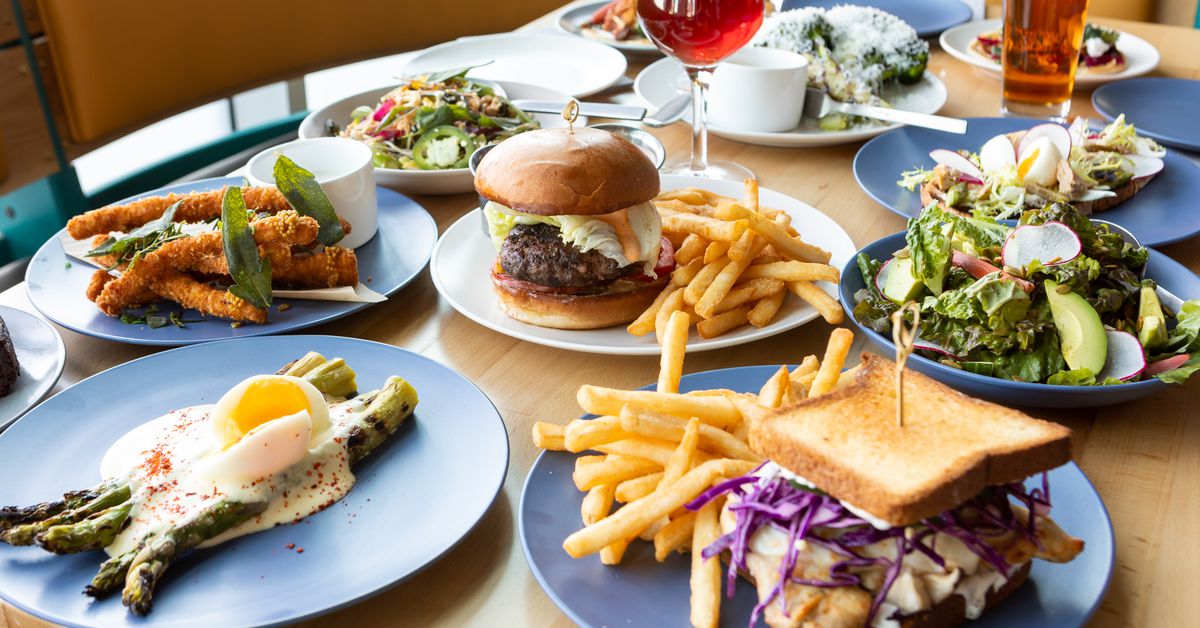 New Belgium Brewing, the Colorado brewery best known for Fat Tire amber ale, has officially landed with an explosion of beer and bicycles in the Bay. Taking over the big space from Little Creatures in Mission Bay, this is New Belgium’s first official presence with a taproom in SF, and the brewery’s first full restaurant. It officially opens this Friday, April 9, which luckily for baseball fans, is the exact same day as the Giants’ first home game of the season, just a peanut’s throw away in neighboring Oracle Park.

New Belgium was employee owned for many years, but it falls under a giant brand these days: Lion in Sydney, a subsidiary of Kirin in Japan, now owns New Belgium, Magnolia, and Little Creatures. Fortunately, they have hired a few local ringers to consult on this new location: Head brewer Ramon Tamayo, coming from Russian River Brewing Company and Anchor Brewing, will be crafting a few local beers, and Laura and Sayat Ozyilmaz, the founding chefs of Noosh, masterminded the menu. (The Ozyilmazes were dramatically ousted from Noosh in fall of 2019, and have been traveling and consulting since, so this marks a welcome homecoming.)

New Belgium Mission Bay will be opening with more than 20 beers on tap. As to be expected, that includes a lineup of their bestselling Belgian-style brews, as well as currently trending hazy IPAs and citrusy sours. Tamayo will also be brewing five new beers on site, specifically for San Francisco, featuring a “Traceable Wit” with local malt from Admiral Maltings, a “Super Sport” crisp Italian pilsner, and “Lefty,” a hopped up West Coast IPA, along with other seasonal releases.

The food menu will satisfy sports fans with burgers and hot dogs, but the Ozyilmazes have Michelin star cred, and they’re swinging hard. The burger is ground wagyu, stuffed with sharp cheddar, on a fluffy white bun. The hot dog is Mission style, wrapped in bacon, and smothered in beer-braised onions. Laura, originally from Mexico, is putting chiles in the ballpark peanuts, and Sayat is mixing in his Turkish roots, sprinkling Aleppo pepper over the asparagus and hollandaise. Everything is intended to be paired with beer, but beer is also folded into four or five of the recipes.

ROY design group overhauled the 6,300 square-foot-space, painting over Little Creatures’ previous washes of blue and gold, and replacing them with industrial gray and steel. True to the New Belgium brand, there is a bicycle theme, but in the context of Mission Bay, it’s gleaming with smooth concrete and steel beams. A mural from local artist John Thomas runs across multiple walls and behind the bar, with a black-and-white depiction of the Golden Gate Bridge. Indoors, there are a dozen or so spaced-out tables in the dining room, as well as tall seats at the bar, and outdoors, there’s even more space on a big patio.

New Belgium Brewing officially opens April 9, starting with indoor dining, outdoor dining, takeout, and retail. Hours will be Monday to Friday 4 to 9 p.m., Saturday and Sunday 3 to 9 p.m., but may vary on game days.