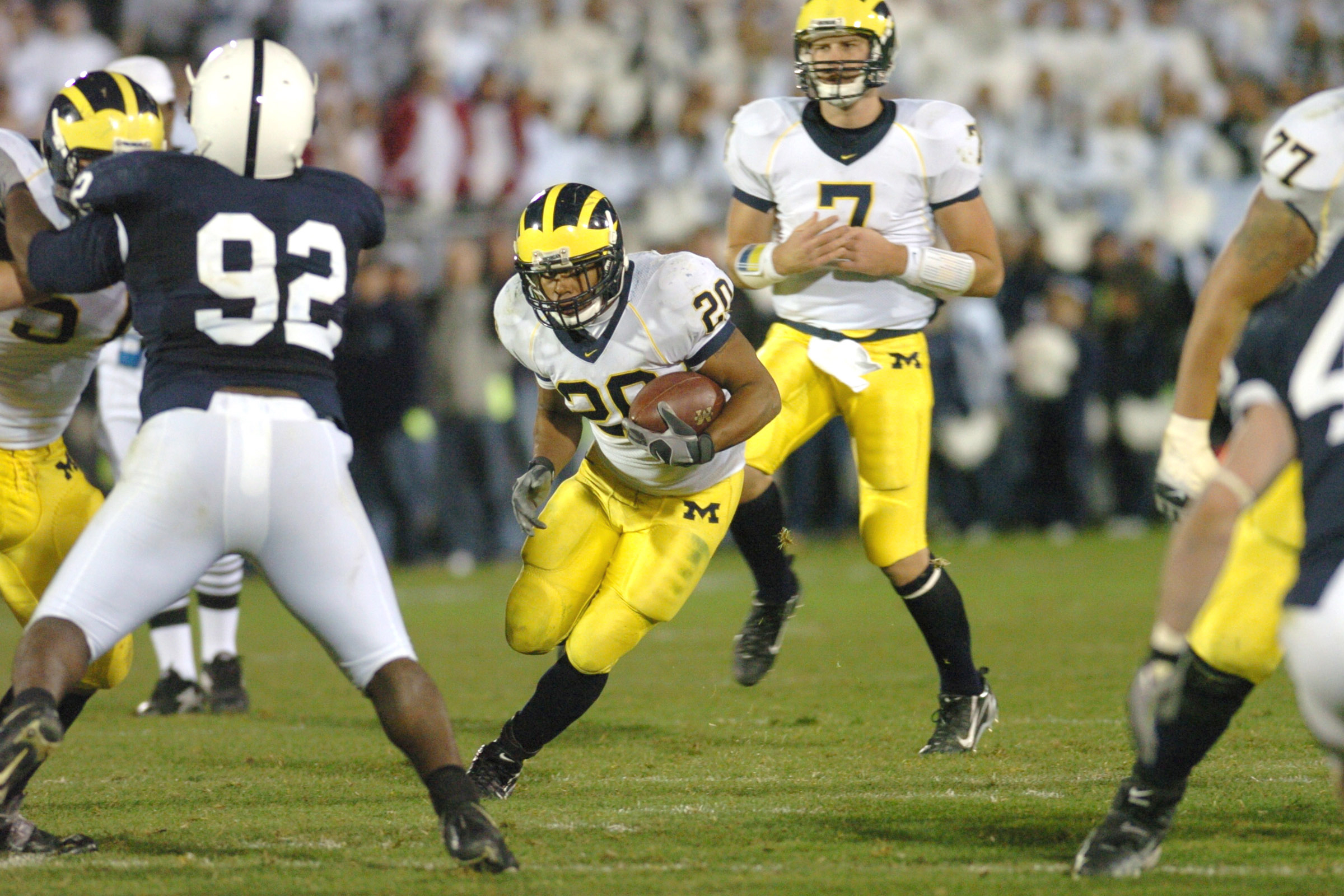 Mike Hart is standing at a podium beside Schembechler Hall and sporting a blue Michigan visor and a white Jordan Brand polo, a scrum of reporters awaiting a few feet away. It’s the third week of August, and Michigan’s fall camp is in full swing.

The scene feels right — Hart, one of the all-time great Wolverines, is back at his alma mater after 13 years spent elsewhere. He joined Jim Harbaugh’s revamped coaching staff in February as the running backs coach and an integral component of Michigan’s offseason youth movement and culture turnover.

When told of this, Hart, 35-years-old, flashes a boyish grin.

Eleven years, five colleges and three titles into his coaching career, Hart has established an identity. And this Saturday, in Michigan’s season opener against Western Michigan, that journey will come full circle.

In 2014, then-Western Michigan coach P.J. Fleck pried Hart away from Eastern Michigan to replace Charles Huff as the Broncos’ new running backs coach. Hart, just 28-years-old, was at somewhat of a professional crossroads, three years removed from playing in the NFL and entering the formative years of his coaching career.

He began his two-year tenure on Fleck’s staff as a quasi-celebrity who left his players starstruck.

“I played with him in video games when I was young and now I’m sitting here in awe,” Jamauri Bogan, a Western Michigan redshirt freshman running back in 2014, told The Daily. “I was just fired up to learn from someone who did it at the highest level.”

Having racked up 5,040 rushing yards and 41 rushing touchdowns as a collegiate player, Hart certainly entered the coaching ranks with a wealth of knowledge. But expertise alone isn’t necessarily indicative of a good coach.

Few 18-year-old running backs enter college as ready to make an impact as Hart did with the Wolverines in 2004, something Hart realized himself.

“You see some great players that become coaches and they can’t communicate with the players, like it’s a block,” Greg Harbaugh Jr., a graduate assistant at Western Michigan in 2015 and the Broncos’ current receivers coach, said. “Mike did a very good job of adapting to who he was coaching, knowing that not everyone who he coaches is going to be able to do what he did.”

Hart proved deft at instructing his players, regardless of skill. He offered different advice to finesse running backs than he did pure power backs, conscious that the position isn’t one-size-fits-all. Each day, he met with the running backs individually to select a specific area of their game to work on. Throughout practice, he kept tabs on each player to ensure they lived up to their word, cultivating a system of accountability.

Hart stretched his influence beyond the running backs room, too, taking turns coaching the offense in scrimmages and actively participating in meetings and game-planning sessions. It didn’t take long for everybody to understand what he had to offer.

“Great coaches are able to make everything seem simple when they present it to the players,” former Western Michigan offensive coordinator Kirk Ciarrocca said. “Mike has that ability and you didn’t have to guess what he was thinking. He’ll tell you.”

Added Bogan: “When it comes to understanding people and coaching people, it’s his God-given gift.”

For as much playing experience as Hart had, though, there were areas he was still unfamiliar with. In Hart’s second season on staff, the Broncos featured a trio of prolific running backs in Bogan, Jarvion Franklin and LeVante Bellamy, two of whom would go onto play in the NFL. The wealth of talent forced Hart to juggle a crowded running backs room, even though he seldom split time as a collegiate player.

“He emphasized having pride in the running back group, which is one thing I really take with me,” Franklin said. “There shouldn’t be any drop-off in talent, performance and production if you go from the first guy all the way down to the last. That’s what coach Hart instilled in us.”

The collective buy-in that Hart fostered paid dividends beyond his two-year tenure. Franklin and Bogan co-existed well enough for the former to become the school’s all-time leading rusher and Bogan to rank sixth on that list. Bellamy, despite receiving fewer carries than the others, is currently with the Denver Broncos. And D’Wayne Eskridge, another running back whom Hart recruited to Western Michigan, is currently with the Seattle Seahawks.

“He challenged us to be football players, be athletes and also be great men.”

To Franklin, when it comes to Hart’s lasting impact in his life, it’s those first two roles — brother figure and father figure — that stand out the most. So in August, when Franklin returned to Kalamazoo for a week-long trial as the Broncos’ quality control coach, he only knew one way to turn for advice.

Hart responded promptly, advising Franklin to build a rapport with the running backs not as football players, but young men. Get to know them on a personal level and from there, the actual coaching will come easily.

As a coach, that’s who Hart is. Two years and 100 miles west down I-94 helped him figure that out.