Livestreaming, Still Niche, Grows as a Tool for Retailers 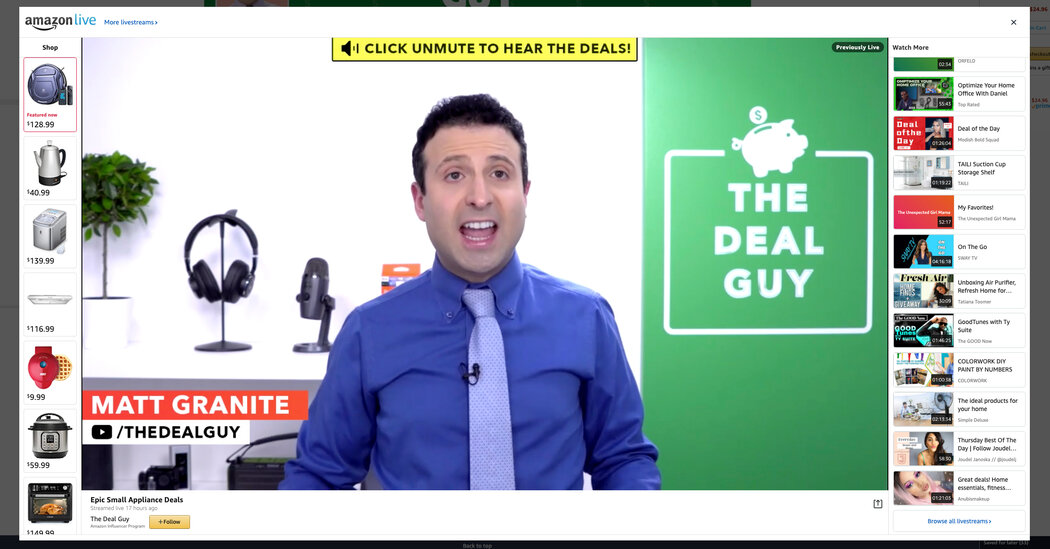 Amazon isn’t the only company trying out this type of hawking on an American audience. Instagram allows some influencers to sell products on livestreams through Instagram Shopping. Facebook made similar moves for small businesses this year. TikTok livestreamed a shopping event with Wal-Mart. And both Estée Lauder Companies and L’Oreal Group have hosted streams for some of their beauty brands.

“Everybody is thinking about this,” said Mark Yuan, a co-founder of And Luxe, a livestream e-commerce consultancy company in New York. “But they are rushing to it because of the pandemic. Before they had a choice. Now they have no choice.”

Mr. Yuan and Zoe Zhang started And Luxe to help bring Western brands to China but have recently seen an increase in inquiries from Western companies trying to get into e-commerce livestreaming. So far, Mr. Yuan said, no American company had quite mastered it. According to him, success entails more than just adding a video to the typical e-commerce experience. Instead what’s needed is a mix of content that isn’t tied to shopping but can attract new viewers, limited-time deals and even products exclusive to that livestream. That goes for all of the major tech companies trying to expand an audience.

“If they want to become an e-commerce livestream marketplace,” Mr. Yuan said, “they will have to change a lot.”

Although e-commerce livestreams are still a niche enterprise in the United States, they are big business in China, where they drive about 9 percent of the country’s $63 billion online market. Kim Kardashian West went on a popular Chinese influencer’s stream and sold out her perfume stock within minutes after 13 million people tuned in. At least one Chinese college offers e-commerce livestreaming as a degree. Chinese retailers have also innovated during the pandemic lockdowns, with more streams focused on one-on-one consultations and store walk-throughs.

But the pandemic seems to be enticing more people to test out Amazon Live while they are stuck at home and looking for new ways to connect. Felicia Jones, an influencer in North Carolina focused on beauty and home décor, said Amazon reached out last year to ask her to join the Live program. She was getting out of the shower one day in November and planned to use a bunch of hair products she had gotten off Amazon when she decided to try out a stream for the first time. Figuring out the app took a few minutes, and she found herself talking to an audience that eventually reached 1,500 people. Now she tries to stream on Amazon regularly.

“If I don’t stream every day, I’m thinking about streaming every day,” Ms. Jones said.

According to the analytics Amazon sends her, Ms. Jones said, her livestream usually gets anywhere from 1,000 to 10,000 viewers, although concurrent viewers can top out in the hundreds. It’s successful enough that she has reached A-list, an internal status that gets her benefits like better video placement and more priority when it comes to support issues.