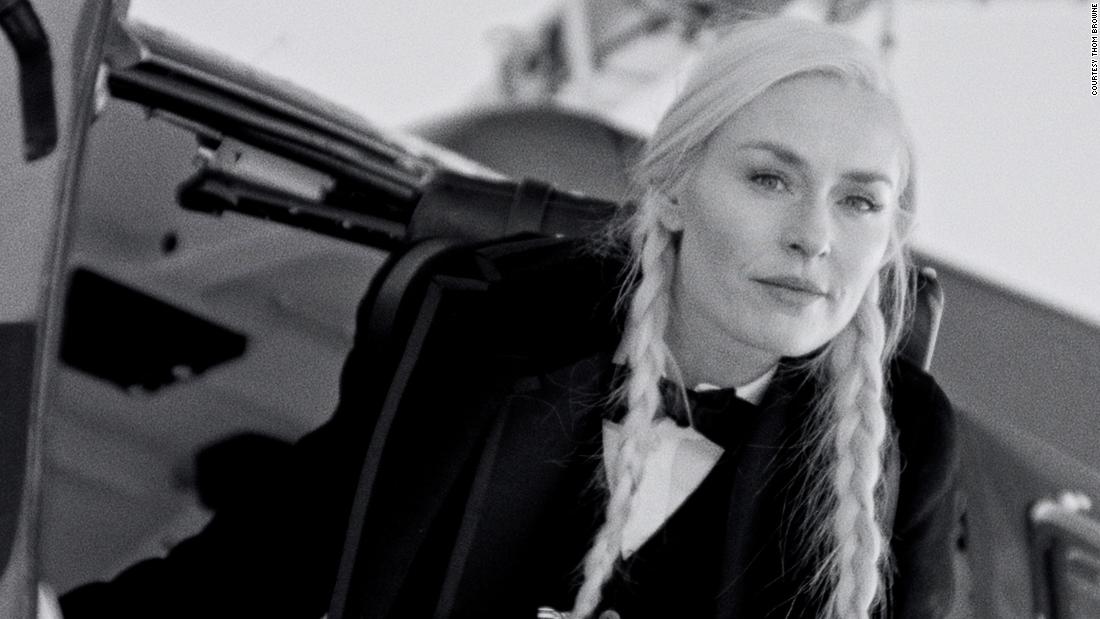 Olympic skier Lindsey Vonn may have retired after the 2018 Winter Games, but a new fashion film unveiled Sunday shows her hitting the slopes again.

In a noir- and fantasy-inspired short for Thom Browne’s co-gender Autumn-Winter 2021 collection, Vonn navigates a snowy dreamlike sequence loosely based on “The Wizard of Oz,” with Browne’s dachshund Hector making an appearance instead of Toto.

Titled “…the most angelic and fantastical dream that led me home…,” the film follows Vonn in a voluminous lamé gown with corset boning over a black tuxedo coat, white-collared shirt and black bow tie. She takes a helicopter to the top of the ski slope, then ditches the cumbersome dress to ski down in a long suit jacket with striped details and a pleated skirt, with spectre-like figures dressed in the season’s dramatic black-and-white looks guiding her way.

“(I wanted to) create this beautiful image of (Vonn) in her environment and mix my world with her world,” said Browne of the film in a video interview. The new season “started from the very simple idea of…tailoring with extreme skiing,” he explained.

Working with Olympians has been part of his agenda for the entire year. For his Spring-Summer 2021 collection, he tapped fencer Race Imboden and track-and-field sprinter Kendall Baisden for a film set at an imagined 2132 Olympic Games on the moon.

“I love working with athletes. Athletes are the most inspirational people to me,” Browne said.

A behind-the-scenes image from the shoot. Credit: Courtesy Thom Browne

Embroidered city names make a direct reference to past Olympic Winter Games, and Hector makes an appearance as a dachshund-shaped purse and a rollbag.

Browne’s reimaginings of the suit-as-uniform have often demonstrated his belief that such styles shouldn’t just be confined to the office. This collection continues to push that concept in an icy outdoor setting. The show is also divergent at a time when many people have abandoned wearing tailored styles at work for pandemic-era leisurewear at home.

“In the last year where everybody was dressing down, I wanted to do something the opposite and dress everybody up in the most extreme black-tie way,” Browne said.