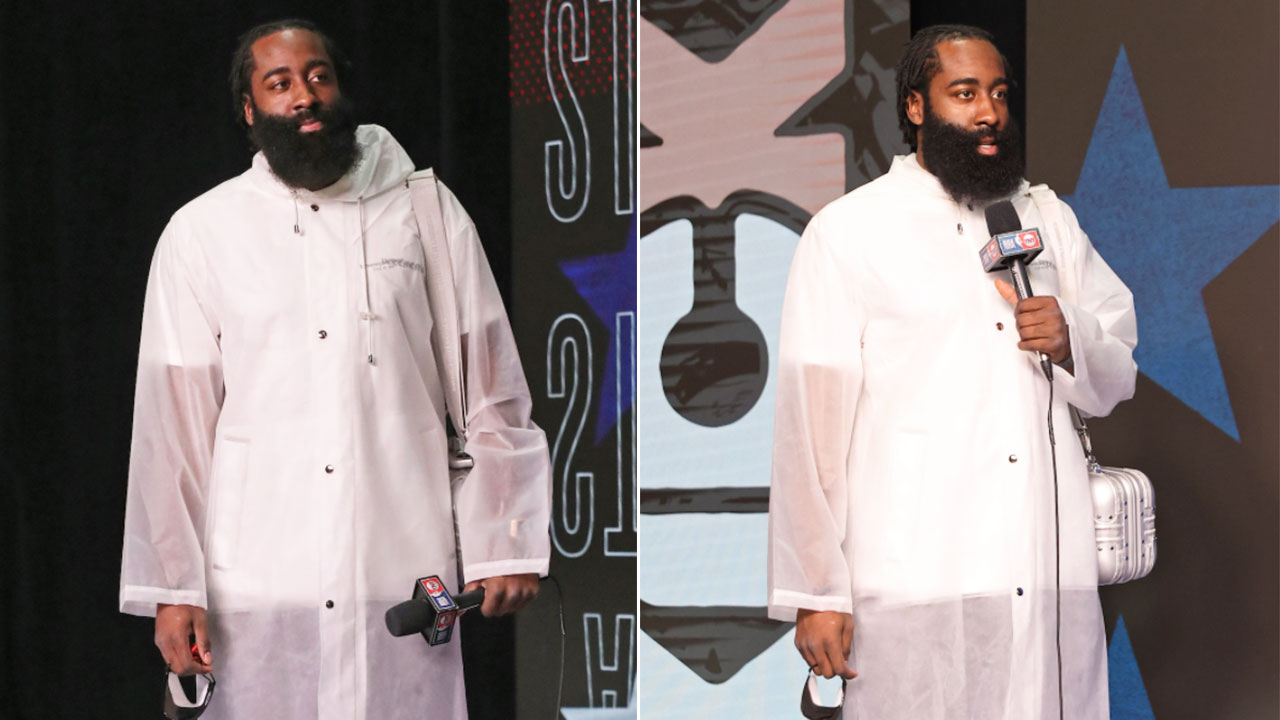 James Harden has found himself at the centre of a running joke on social media after a bizarre fashion statement before the NBA All-star match.

The annual basketball exhibition hadn’t even tipped off when Harden found himself trending on social media.

The Brooklyn guard – part of a Team Durant that also included Nets teammates Kevin Durant and Kyrie Irving – rocked up to the All-Star clash in an eye-catching see-through raincoat that came down to his knees.

He even topped off the intriguing look with a pair of fluro green sneakers.

Some viewers likened the long-length raincoat as a mix between a traditional rain jacket and a doctor’s coat.

Others quite rightfully questioned why Harden was wearing the peculiar outfit inside, regardless of whether or not it was raining outside.

Not surprisingly, it was a hot topic on social media as fans roasted the Nets star and his questionable “fashion inspiration”.

James Harden has merged the doctor’s coat with a rain jacket. Truly a fashion inspiration.

James Harden put that raincoat on, looked in the mirror and said “swag” 😭

I know I’m not much for style, but can someone explain to me what James Harden is wearing at the all star game? Is that a raincoat or um idk? Someone. Anyone? @NBA #NBAAllStar

I see why James Harden wore the rain coat… he knew Curry was going to make it rain tonight! He has to prepare! #NBAAllStar

The NBA’s controversial decision to persist with the All-Star Game during a pandemic was put into sharp focus with Philadelphia 76ers stars Ben Simmons and Joel Embiid ruled out after coming into contact with someone COVID-19 positive.

Harden was one of those to voice his opposition to the exhibition match, saying he thought it felt “forced.”

“I feel like we basically have a game… [like] every other day in the regular season,” Harden said.

“You finally get an opportunity to have close to a week off and be able to take a deep breath and be with your family, things like that.

“We just have this one-day event, which is pretty tough. This entire season is tough, it’s difficult, a lot of craziness has happened throughout the course of the year.

“It’s something that we just gotta live with.”

Normally, the weekend is filled with festivities beginning on Friday night. This year, the Rising Stars Challenge isn’t being played, while the Slam Dunk Contest, Three-Point Contest and Skills Challenge are all being held throughout Sunday night in Atlanta.

Harden also gave a grim indication of just how different this year’s event was from a player’s perspective.

“Get to Atlanta, get tested, stay in the room. Pretty much it,” Harden told reporters about the All-Star preparations.

“Stay in the room until it’s time to go out there and play.”

Click here to sign up to our newsletter for all the latest and breaking stories from Australia and around the world.