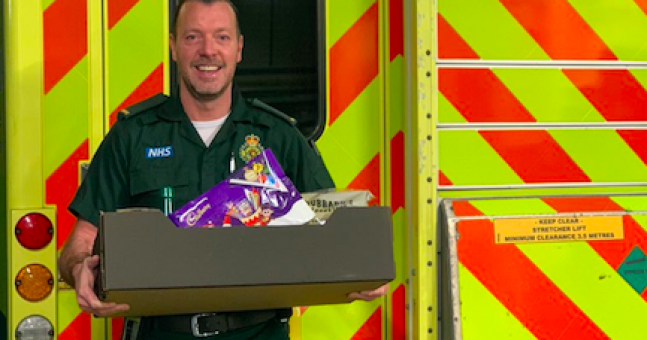 A LONDON Irish paramedic who for ten years has led a gift-giving operation that has brought joy to thousands of young people claims he will never stop his campaign to “bring a smile to the faces of sick children”.

Nigel Flanagan has been a paramedic with the London Ambulance Service for 17 years and is currently based at their Croydon complex.

The father-of-two, whose parents Maureen and Sean hail from counties Galway and Mayo respectively, is also the founder of the Operation Sick Children’s Christmas Present Appeal.

This unique initiative sees the 47-year-old, and a host of his paramedic colleagues, annually delivering hundreds of presents to children aged between one and 16 who find themselves in hospital or hospices around the capital on Christmas Day.

It is a project that consumes three months of Mr Flanagan’s life each year, with the mammoth task of organising the annual present drop – including calling for present donations, collecting and wrapping them –  beginning in October and culminating in the all-important Santa-style deliveries on December 25.

It first began in 2010, after Mr Flanagan transported a young boy to hospital who was worried Father Christmas would not be able to find him. 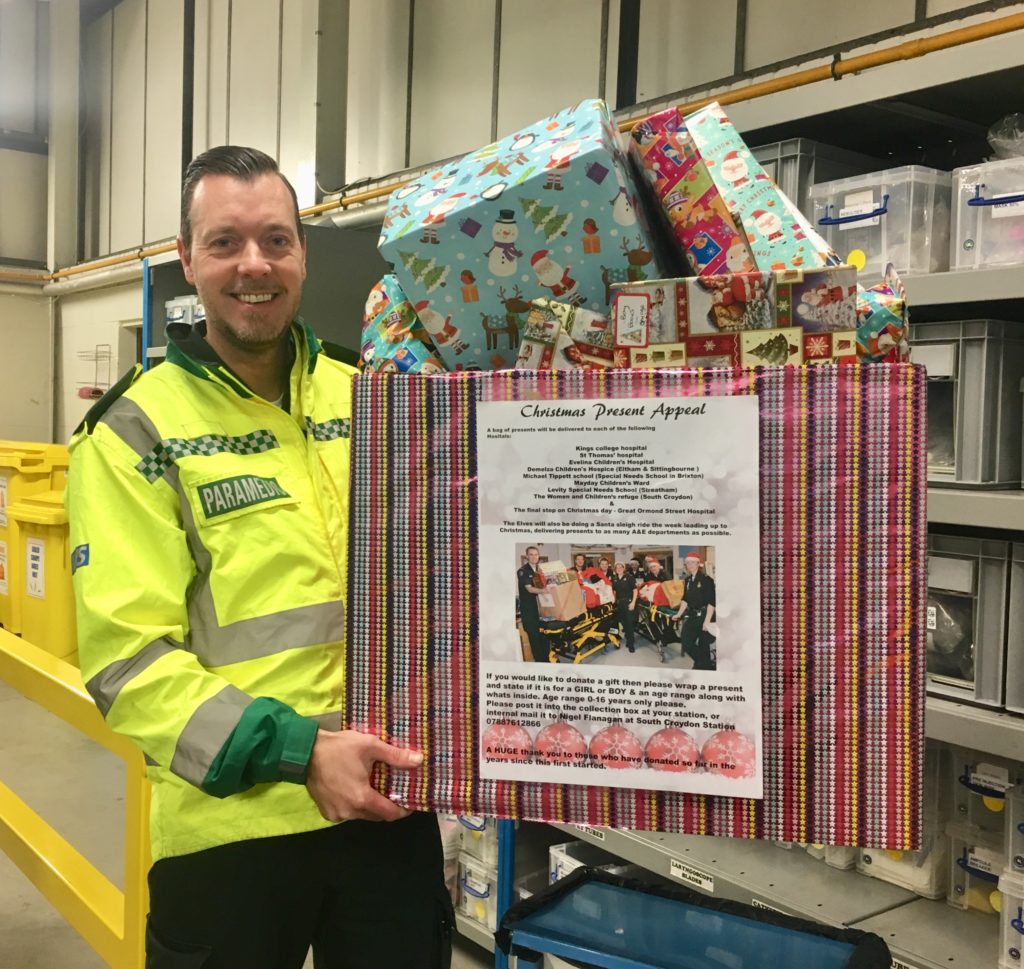 “I was taking this little boy to hospital on Christmas Eve, and he cried a lot in the ambulance while I was attending to him.

“I promised him that Santa would find him and come to the hospital to see him the next morning and that his mum and dad would send Santa a fast message.”

He added: “This was when I thought, can I do something here, something that will make a difference on Christmas morning to children spending Christmas day in hospital.

“So I sent a few emails with my ideas out to work colleagues at the London Ambulance Service and the response was incredible and so encouraging.” 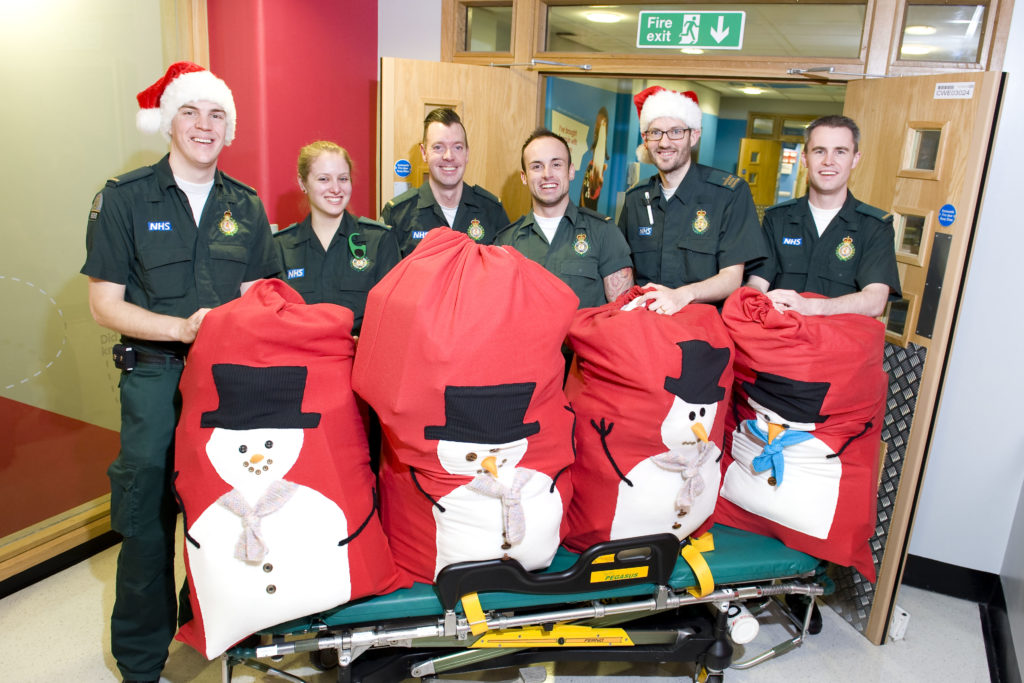 “A hospital or children’s ward or an A&E department is the last place that children want to be, especially on Christmas morning,” Mr Flanagan explains of the initial plan.

“I thought I would try to bring some of that magic of Christmas to the children spending it in hospital, just to be able put a smile on their little faces.” 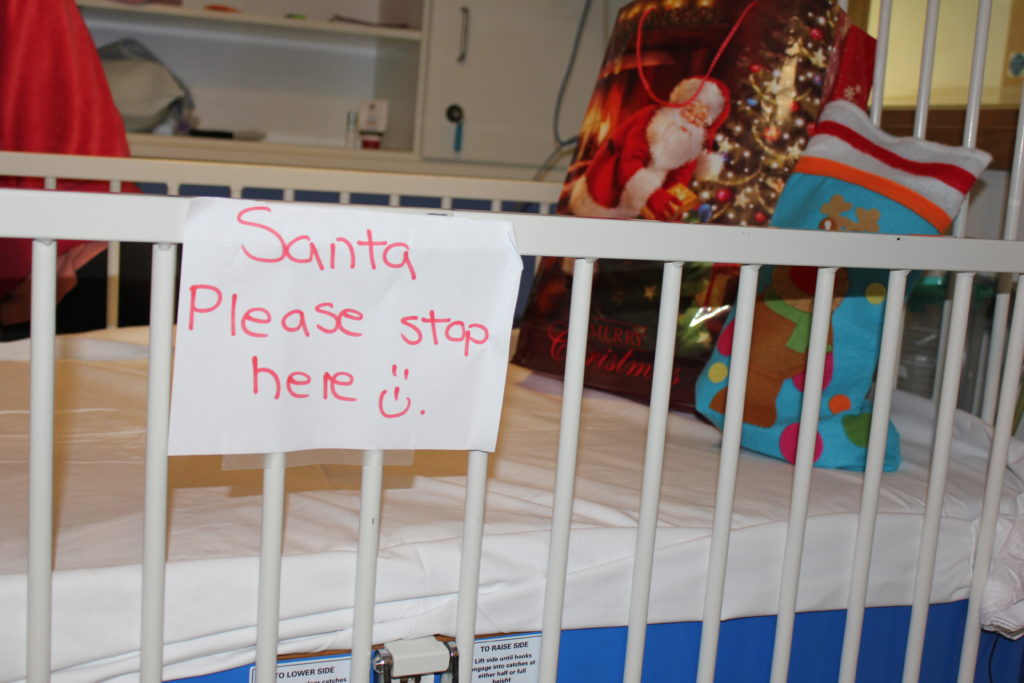 The annual present drop brings Nigel and his team of paramedics to hospitals and hospices across London (Pic: Flanagan family)

That initiative has grown exponentially over the past decade, with Mr Flanagan – and the team of paramedic colleagues who support it every year – now delivering many hundreds of presents to more than 30 different hospitals, hospices, refuges, special schools and social services sites across London each Christmas.

And while the project has flown somewhat under the radar outside of the NHS community over the past decade, Mr Flanagan’s work has achieved the royal seal of approval. 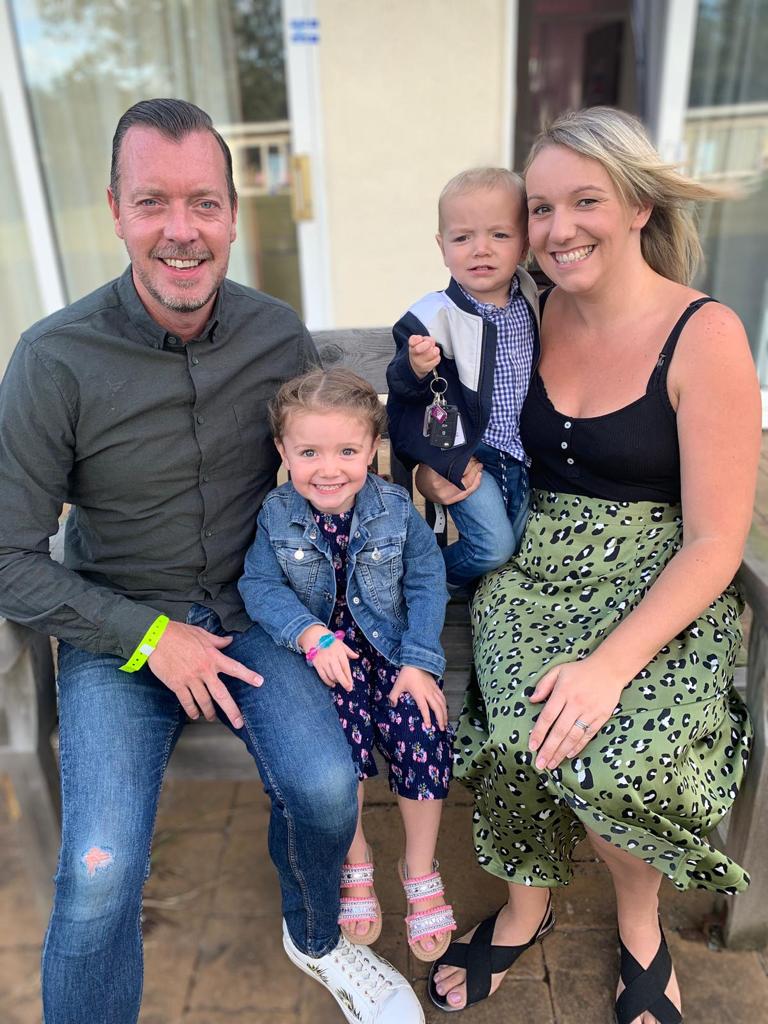 On May 21, 2005, two days before his wedding to wife Carly, he was a guest at Buckingham Palace for the Queen’s Birthday Party – an invite received in honour of his commitment to young people in Britain.

But ultimately Mr Flanagan, who now has a daughter aged three and a two-year-old son, has not been looking for any limelight.

It’s the smiles on the faces of the children who receive the gifts he organises – through a vast network of friends, family and colleagues supporting him with annual donations – that keeps the momentum building on this heartwarming project.

“The simple fact that it’s bringing happiness to sick children is what keeps this going,” he said. “This is what I set out to do.” 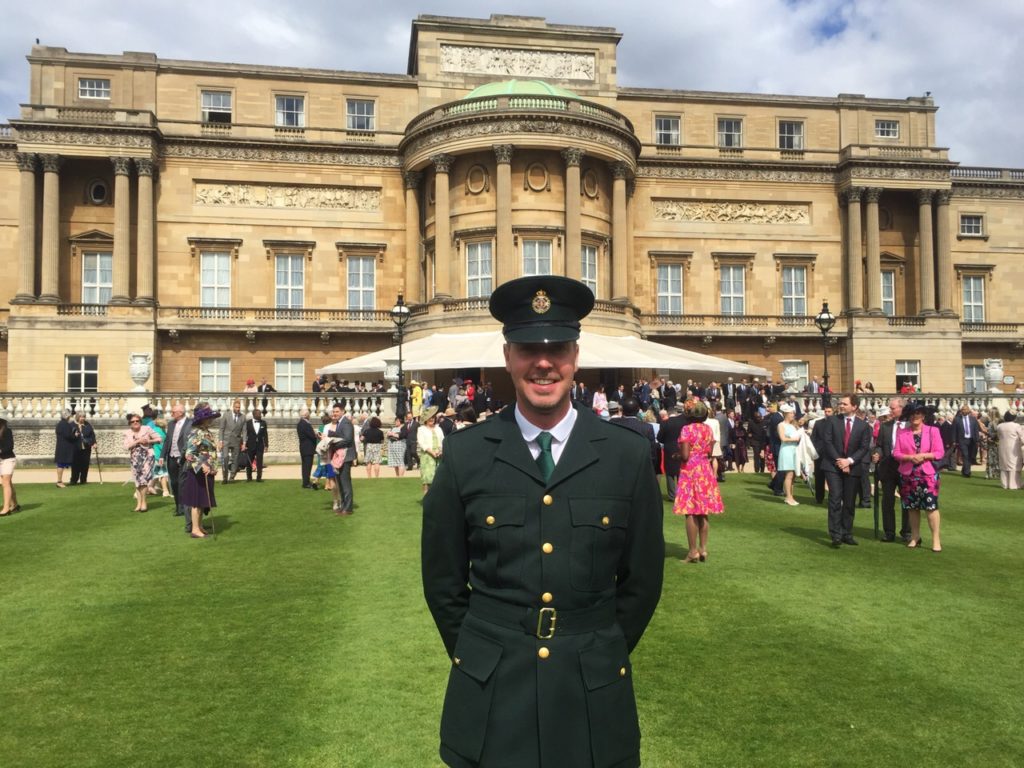 In honour of his work with young people, Nigel Flanagan was invited to Buckingham Palace for the Queen’s birthday celebrations in 2005 (Pic: Flanagan family)

He added: “I can’t say it’s easy from October till Christmas very year, juggling shift work, family life and every spare hour collecting presents from family and friends and getting everything in order, but I have to say the end result always makes it all worthwhile.”

He explained: “It takes up every hour we have to spare between our busy shift work pattern from October till Christmas Day.

“It’s the whole spectrum of giving time to someone that needs our help and each year we keep adding to our list of hospitals and hospices.

“To see that one moment when a child can forget about what they are going through and to see the excitement of them opening the present I personally take in is just so special. 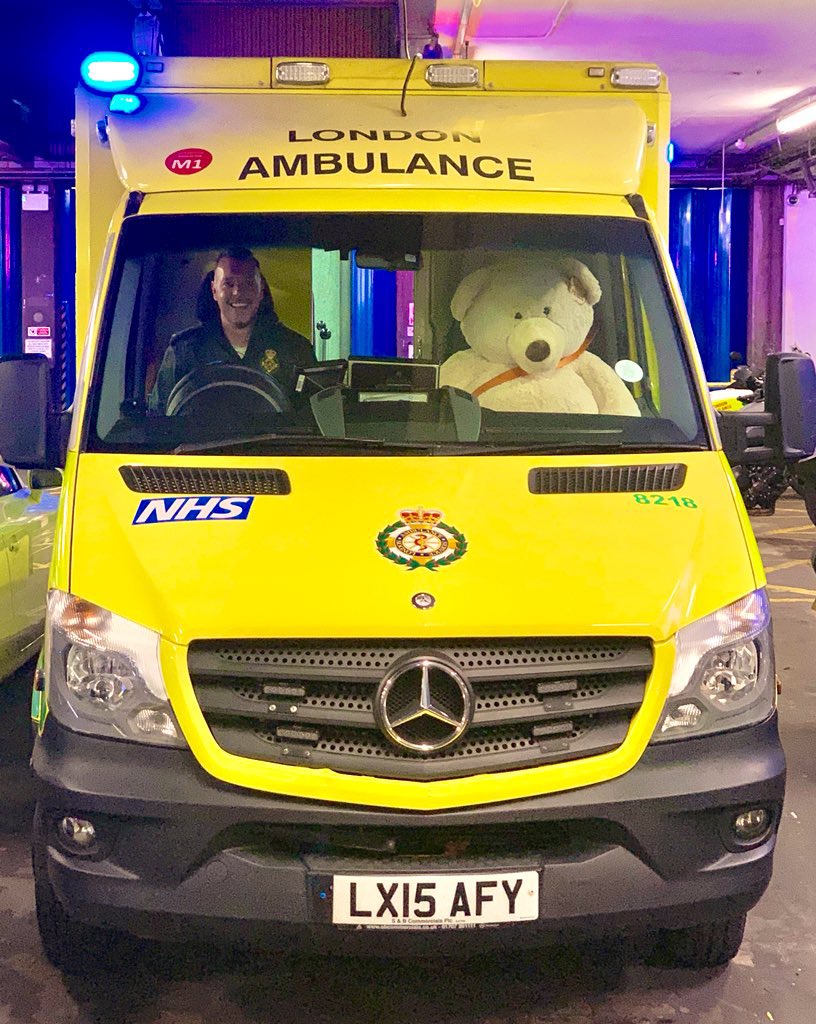 “This in itself motivates me to do more and more every year for sick children.”

And Mr Flanagan, who lives in Lingfield, Surrey, has no intention to wrap up the initiative any time soon.

“My plan is to continue this for as long as I possibly can, of course, with the help of my paramedic colleagues, the support of family and friends and anyone who would like to help to make my campaign ever bigger for sick children,” he admits.

“Long may it continue that I will get enough support and presents to deliver to hospitals, hospices, mother and child refuges and local social services,” he adds.

“So far this has by far exceeded my dream of giving support to sick children and I have no plans to stop.

“I will carry on appealing for presents to give to sick children throughout London and beyond.”