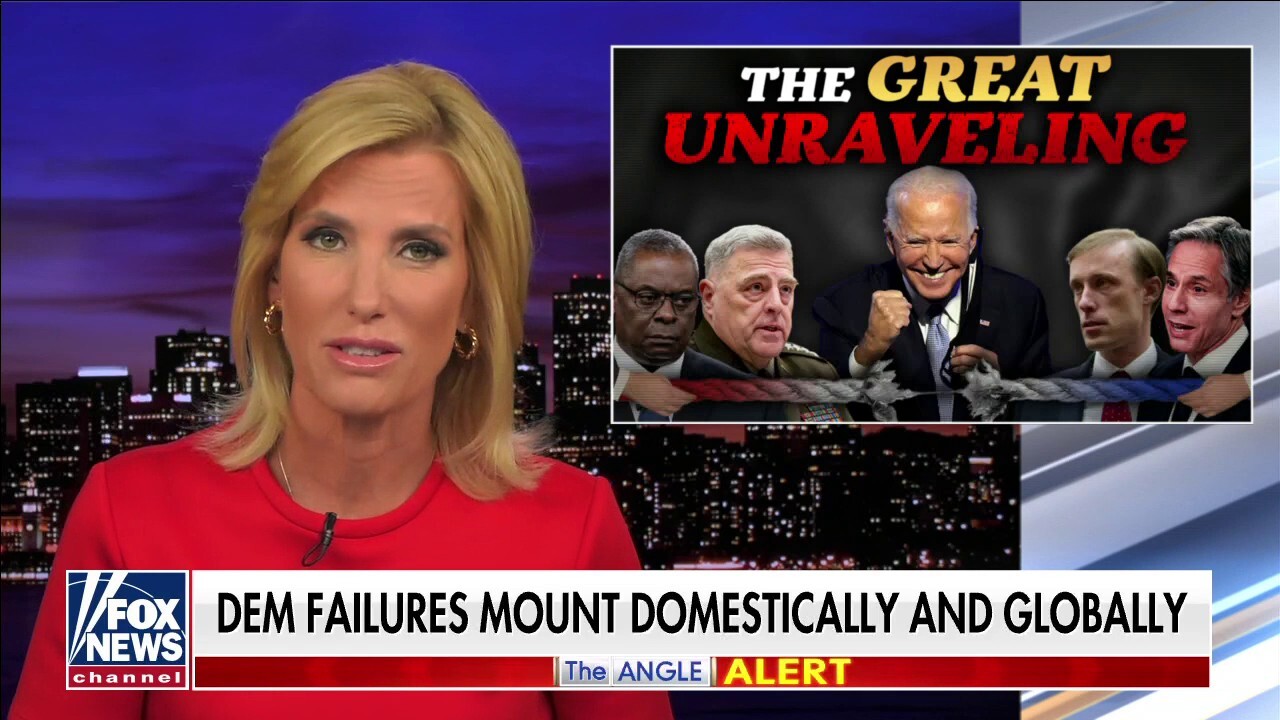 In her “Ingraham Angle” monologue on Monday, host Laura Ingraham described how President Biden’s Afghan crisis is the latest example of the Democrats’ wholesale “unraveling” of America, its reputation, its economy and its national security.

Reporting from San Francisco, Ingraham opined on the tragic state of the “once-great American city” under the grip of full Democratic rule:

“While we are horrified, rightly so, as the Taliban terrorize the people of Afghanistan, why are so many numb when our people are being terrorized here: It’s a democrat-engineered American tragedy,” she said.

“The humiliation of America is unfolding before our eyes in a dramatic fashion.  Our president is incapable or unwilling to do the basic tasks of his job – from enforcing our border at home to protecting our national security abroad. His policies have made America more dangerous, the basic cost of living more expensive, and our people more divided,” she added of Biden.

Pointing to people like Secretaries Alejandro Mayorkas and Lloyd Austin III, Ingraham said Biden surrounds himself largely with a mix of “radicals and incompetents.” The two men, she said, are shining examples of “ineptitude and arrogance.”

The Taliban now in control of Afghanistan is now laughing at the United States, she added, in part because of corruption and politicking at places like Austin’s department:

The Pentagon, she said, failed to recognize that the Afghan Army would crumble in days without further U.S. support. Austin and Gen. Mark Milley couldn’t explain the lack of preparedness and should have resigned last week, she added.

“And determined to double down on failure, Biden’s people want you to believe the Taliban can be trusted with Americans’ safety,” she said, playing a clip of Rear Admiral John Kirby – Austin’s spokesman – telling reporters the importance of keeping communications open with Taliban militants and seeking “de-confliction.”

She added that Secretary of State Antony Blinken has a long record of incompetent leadership, not the least of which was confusing former Afghan President Hamid Karzai with Ashraf Ghani – the country’s last leader who fled his own country as the Taliban surged.

Blinken claimed to have been on the phone recently with “President Karzai” – who has not been the president there since 2014.

“Biden’s team could have gotten better advice from watching this show than listening to the people who spent more time on the narrative of January 6 than on our exit from Afghanistan – [while] the two elected officials in the White House – Biden and Harris – apparently have little role to no in policymaking at all.”

Ingraham remarked that Harris is so unimportant in the day-to-day White House that Biden’s advisors sent her to Singapore on a state trip.

“This suggests Biden’s aides think Harris is not only useless during a crisis, but a liability. Frankly, this is the best decision they’ve made over the last week,” she said.

On the homefront, Biden and his Democratic allies in Congress continue to embolden criminal elements, as urban crime skyrockets and places like California get hit hard.

“Compare all of this what’s been happening on the GOP side of politics,” she added. “We also had an elite that failed. We also had leaders who were unable or unwilling to defend our interests.”

However, in the Republicans’ case, they were pushed out of power – pointing to the lack of Bushes and Cheneys on the forefront of GOP politics.

“In this country, we don’t have to accept failed leaders. We have the power to replace them. And that’s what we should do,” she said.

“Biden may not care if the United States goes down the drain – but we voters can replace his Democratic allies in 2022, and replace him in 2024.”

The same goes for Gov. Gavin Newsom, she said, pointing to the Democrat’s upcoming recall election on September 14, as Los Angeles conservative radio host Larry Elder, former Olympian Caitlyn Jenner and other Republicans along with some Democrats and Independents square off on the replacement ballot, should the governor lose his recall.

“Newsom obviously doesn’t care about the problems here in California – but the voters here will have their say on September 14th.  And if they vote to recall him, they can begin to take their state back,” she said.

“Remember: They want you to feel helpless. They want you to believe that they are doing the best they can, and that it can’t be any better than this. That’s not true,” she said, playing a clip of then-California Gov. Ronald W– Reagan strongly asserting he wouldn’t “stand by and watch this great country destroy itself under mediocre leadership that drifts from one crisis to the next, eroding our national will and purpose” – in reference to President Carter and the Democrats at the time.

“Everything Joe Biden and Gavin Newsom touch is unraveling. Including their poll numbers. But we don’t have to allow this embarrassing spectacle to continue indefinitely. If we do, the cruel joke’s on us.”