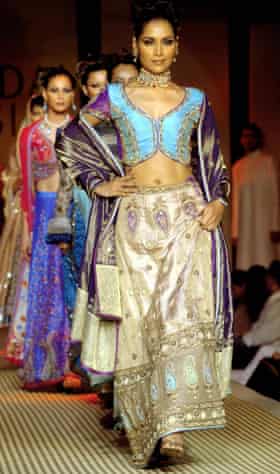 Satya Paul, the Indian fashion designer who invented the modern sari, has died at the age of 79. His son, Puneet Nanda, said in a Facebook post that the designer had suffered a stroke in early December from which he had not recovered.

Paul revolutionised the idea of the sari for Indian women, moving it beyond a utilitarian ethos. He used experimental touches like geometric patterns, and unexpected fabrics such as muga and tussar silks, chiffon and crepe, to revitalise the silhouette.

Paul also pioneered the “trouser sari” – a touchstone of modern sartorial independence for Indian women and a sharp U-turn away from the traditional Banarasi sari.

“I always thought of him as an artist,” designer Kaushik Velendra told the Guardian. “He worked with his colours like a painter.”

Paul was born in 1942 in Layyah, in what is now Pakistan, before his family moved to India. “My family was uprooted from Pakistan and landed in India with nothing in hand,” he told DNA India magazine. He began his career in retail, before moving into the niche market of Indian heirlooms which he exported to Europe and the US.

With no formal design training, he launched his first sari boutique, L’Affaire, in 1980. “I had to self-teach myself about design and quality, as I was not content only with trading,” he told DNA India.

In 1986 he started his eponymous label. Worn by Indian celebrities such as Aishwarya Rai, Mandira Bedi, Karisma Kapoor, Kareena Kapoor and Vidya Balan, it became one of the best known fashion brands in the country. “Design is like a river for me,” he told DNA India. “It is continuously on.”

The label diversified into other products including ties – which became as well-known as its saris – and dresses, handbags, scarves and kaftans.

At its heart the Satya Paul brand was about “making people feel better about themselves by wearing his clothes. It’s the best way he represented what India stands for,” said Velendra.

Paul and his son Nanda, whom he partnered with, exited the company in 2010.

Designer Osman Yousefzada told the Guardian: “Growing up in Birmingham in the 90s, there was [a] sari emporium on Stratford Road which was a mecca of saris. It sold Satya Paul and the well-heeled immigrants would go and try on his beautiful fabrics in their new, grey homeland. His use of colour and fabrics has always inspired me.”

Posting on Instagram, designer Masaba Gupta highlighted the importance of Paul’s legacy, writing that the designer was “a true example of an actual (homegrown) brand: put in corporate hands at the right time and one with a signature that will stand the test of time. Fashion schools – please introduce young Indian design aspirants to this brand in schools and various other homegrown brands. We can be inspired by the story of Chanel … but we must learn what happened on our soil first.”

Velendra said Paul had changed fashion in India by putting his stamp on to everything he designed, no matter how big or small. “[Paul’s] personal involvement in everything has created a benchmark that a lot of other designers have followed,” he said. “Even if it was commercial, even if it was extravagant, it was personal. In that context, he created an example of how we should all work. That’s something that will never be forgotten.”