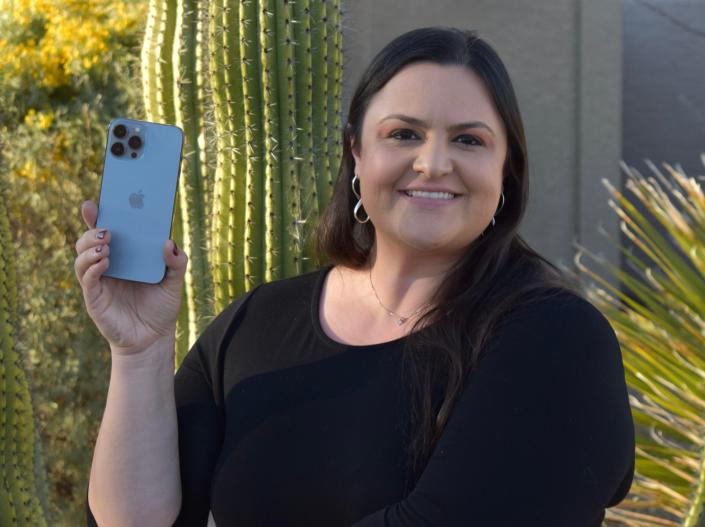 In the late 2000s, when the iPhone was becoming wildly popular, I disliked Apple and its products. Their incompatibility with other tech bothered me, as did having to commit to their hardware and accessories.

I’ve owned every other type of phone that isn’t an iPhone — from Google, Samsung, LG — that wouldn’t destroy my nonconformist spirit and wallet.

Yet, somehow, in January, I sat looking at an unopened box holding my new iPhone 13 Pro Max in Sierra blue.

My two-year-old LG Stylo 5 had started to fail. SMS messages weren’t always being delivered, there was significant lagging when I used the internet, and I was constantly deleting apps because of the lack of storage.

I’d reached a point in my life where I needed something reliable for my freelance work, and these inconveniences were outweighing my commitment to not purchasing Apple products.

I asked the opinion of a friend who had also been Team Android and recently caved to the iPhone 13. He told me he hadn’t regretted the swap. “It just works,” he said. “You’ll be happier if you switch.”

Apple’s recent announcement of a renewed security policy to prevent advertisers from tracking user data also swayed me. I had noticed a worrying number of targeted ads across the apps on my LG phone. I decided to make the switch to an iPhone.

I wanted the iPhone 13 Pro Max. While the high price was a deterrent, I liked the Max because the size was similar to the Stylo 5, which fit my hand well and made typing on the keyboard easier.

My last few LG phones had been much cheaper but full of issues. It was worth the expense for something that would be reliable.

My biggest concern was losing photos, texts, and contacts when I transferred over to iOS; I felt vulnerable realizing how much of my life could be lost.

The manager at the Apple Store where I purchased the phone reassured me. “Apple makes it so simple to switch from Android,” he said. “Put your SIM card into the new phone, download the companion app on your old phone, and Apple will pull everything over.”

Unboxing my new iPhone, I was impressed — the packaging was slick and appealing. Everything was laid out well with a purpose in the stylish box. I was slightly surprised by the pointless inclusion of an Apple sticker.

With everything prepped, I placed the iPhone next to my LG, crossed my fingers, and started the transfer via the app, which used a temporary network set up by the iPhone. My LG screen showed which items were being uploaded, while the iPhone showed a wait of one hour until completion.

These are the things I found most surprising about my new iPhone and the transfer process.

An error in transferring may not really be an error

The first transfer reached 99% completion before saying that there was an error and that I would have to try again. So I did — with the same result.

I decided to cancel the transfer and finish setting up the phone, resigning to transferring my data later. To my surprise, my contacts, text messages, and photos were all there twice over. Both transfers had worked to some extent, but there was nothing during the process to signify that they had. Critically, nothing was lost except my WhatsApp messages.

Considering I’d never had trouble moving my WhatsApp messages, I thought that would be the easiest part of the whole transfer.

When I opened an empty WhatsApp on my new iPhone, my heart sank. Quick research pointed out that WhatsApp messages couldn’t transfer across different operating systems.

Unless I used a third-party app to move the messages, they would remain on my Stylo.

Apps are strictly ordered on your home screen

Apps don’t transfer from Android to Apple, so I redownloaded the ones I needed and started organizing my pages. Just like with my Stylo, I planned to arrange my apps so I could see most of my background photo.

When I tried dragging apps to random spots on the page and they wouldn’t stay, I assumed I was doing something wrong.

Apple hadn’t built its apps to stay in one rigid grid without the customizable whimsy to drop them anywhere that Android has, right? Wrong.

There are no external notification lights on iPhones

One of my favorite Android features was a small red blinking LED light at the top of my screen that would flash when I had important notifications.

I loved it because I enjoyed not having to actively check my phone for notifications, and I am notorious for missing messages. Apparently Apple does not feel the same way.

This was probably the biggest surprise of all.

I can tell apps not to track my activity. I make fewer typing mistakes on the keyboard. The iPhone is intuitive and user-friendly.

If you’re one of those Android users out there considering the switch, I’m here to say that I survived going to the other side. It’s been a worthy purchase, and it probably won’t be my last iPhone, which is the best I can say about any product.

Getting all dressed up — for free | News, Sports, Jobs

Mar 5, 2022 Jesika Coline
We use cookies on our website to give you the most relevant experience by remembering your preferences and repeat visits. By clicking “Accept All”, you consent to the use of ALL the cookies. However, you may visit "Cookie Settings" to provide a controlled consent.
Cookie SettingsAccept All
Manage consent