‘He had a style of his own’: Flint mother urges people to provide information on son’s shooting death 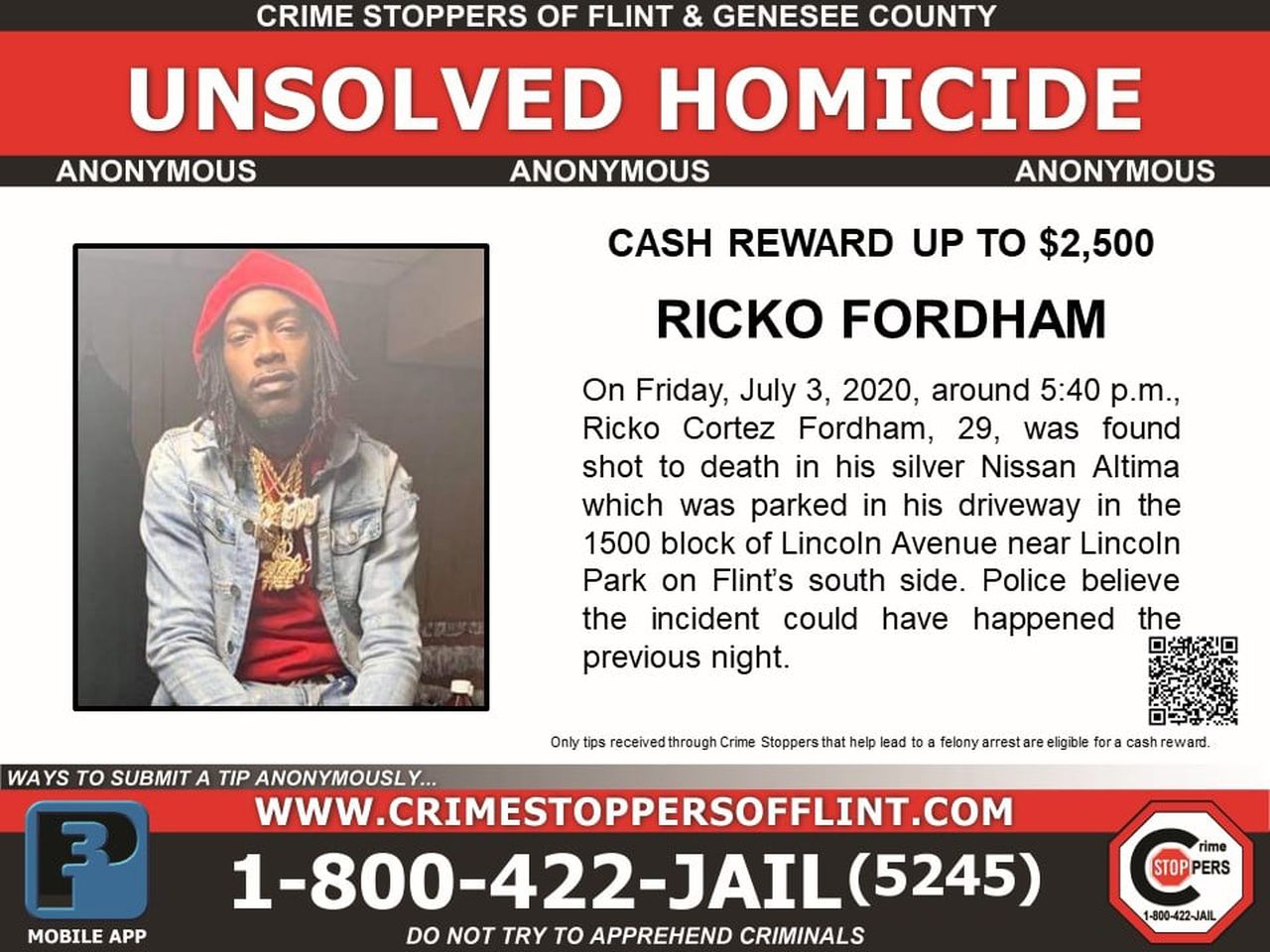 FLINT, MI — A mother is looking for answers in the July 2020 shooting death of her son in Flint.

Ricko Fordham, 29, was found shot to death on July 3, 2020, in his silver Nissan Altima parked in his driveway in the 1500 block of Lincoln Avenue near Lincoln Park.

Police believe the incident could have happened the night before Fordham’s body was found.

Everybody who knew her son loved him, said Lillian Fordham, Ricko’s mother.

“He was just a fun, spirited person,” Lillian Fordham told MLive-The Flint Journal. “He made you laugh all the time. He had good advice. At such a young age, he had a mature mind.”

Her son’s 3-year-old daughter and 5-year-old stepdaughter were his life, Lillian Fordham said.

Two weeks after her son’s death, she said her 17-year-old niece was killed in a drive-by shooting.

“I didn’t have time to really grieve Ricko before she was killed,” said Lillian Fordham.

The loss of her son still hurts on a daily basis.

“There’s no pain like losing your child. It’s unbearable,” she said. “If I go to the grocery store, I cry. If I’m sitting around, I think of him. I just miss him so much.”

Ricko Fordham was also known for his love of fashion, his mother said.

He was known for taking shopping “to the next level.” He was also passionate about music, basketball and playing video games with his friends and family, according to his obituary.

His love for fashion started when he was 12 years old, Lillian Fordham said. He was stylish for every occasion and stood out from everybody else.

“He had a style of his own,” she said. “He would walk into a room and everyone would think a celebrity walked up in there.”

He even participated in some fashion shows.

People knew him as “ski-mask reek,” after he showed up at a concert in a ski mask, Lillian Fordham said. She said people at the concert thought he was a star.

The mother urged anyone who knows anything about her son’s death to come forward.

“If you knew Ricko, you know he would give you the shirt off his back,” Lillian Fordham said.

Anyone with information about the fatal shooting is asked to call Detective Trooper Keith Bieganski at 810-237-6900 or, to remain anonymous, contact Crime Stoppers of Flint and Genesee County at 1-800-422-JAIL (5245), on the P3Tips mobile app, or online at CrimeStoppersofFlint.com.

Crime Stoppers of Flint and Genesee County is offering $2,500 for information leading to a felony arrest in the case.

‘I have to tell my grandchildren about their father in the past tense’: Mother calls for end to gun violence in Flint