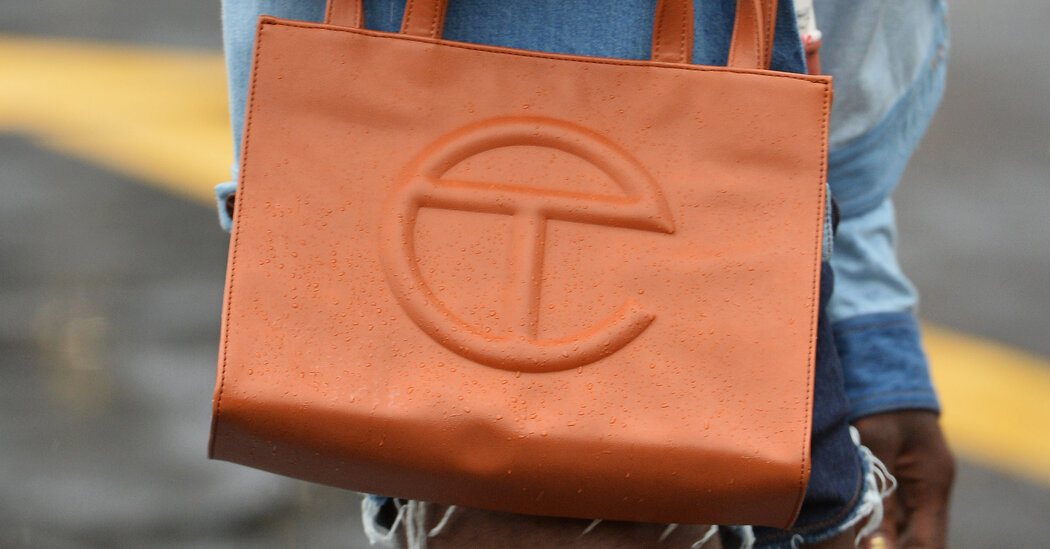 For decades product plagiarism has been seen as the price of success in the fashion world: Make a hit bag or a viral dress and someone (sometimes many someones) will unabashedly rip it off, often almost overnight.

So when a handbag licenser for Guess, Inc. decided to create a bag that looked an awful lot like the Telfar shopping bag, perhaps the greatest hit handbag of the last year, it probably didn’t seem like a big deal. Even though the Guess version features such similar double handles, similar shape and similar logo — an embossed “G” in a circle, like the embossed T-within-a-C of Telfar. If you squint, you could get the two confused.

But they hadn’t reckoned with the Telfar tribe, or what the designer, one of the few Black creatives at the head of his own fashion brand, and his work have meant to so many.

On March 27, a protest wave began to build on social media calling out Guess for unabashedly copying the work of an independent designer of color at a time when the industry’s history of racism is finally being addressed.

A mere day later, the brand withdrew the product from sale — it had been offered on various third party websites, including Macy’s and Hudson’s Bay — and issued a statement.

And it all happened without Telfar Clemens himself, or his creative director and business partner, Babak Radboy, ever making a public statement about the issue, or posting a photograph.

Indeed, Mr. Radboy didn’t even know Guess had decided to withdraw the totes until a reporter read the statement to him over the phone. (Mr. Clemens, who is Liberian-American, had been in Liberia pretty much all of March and returned after the whole brouhaha was over.)

Mr. Radboy said he and Mr. Clemens had become aware of the Guess copy when a friend from Australia emailed them about the bag in February.

At the time, Mr. Radboy said, he and Mr. Clemens had decided not to pursue any action, in part because they “weren’t afraid of it — and we didn’t want to draw attention to it.”

Guess had, he said, missed the whole point of the bag, which was not “about an object, but about the culture of the bag, the story around the bag and the phenomenon of the bag” — what the bag symbolized to the people who bought it, in other words, rather than the actual bag itself.

The fact that, for example, it represents its own kind of luxury, made for communities often previously marginalized by the fashion world; that it is now sold only direct-to-consumer on Mr. Clemens’s website. And each time a drop takes place, it sells out almost immediately and the lucky few who manage to buy one often cheer about it online as if they’d won the lottery; and that it thus has become a sign of community.

None of that could be copied. So Mr. Radboy and Mr. Clemens never saw the Guess bag as a threat to their business. On the other hand, they did see a court case as a complicated effort and a probable long-term financial drain.

This is actually the second time the social web has risen up in arms over a perceived wrong to Mr. Clemens. The last time was in July 2020, when the Gap signed a deal with Kanye West, seeming to go back on its plan to collaborate with Mr. Clemens.

The reactions have been different from the callouts pursued by the Instagram watchdog Diet Prada — they are broader and more personal.

Each time, Mr. Clemens and Mr. Radboy have stayed quiet, in part because they don’t like the narrative of themselves as victims of a big, bad corporation. As far as they are concerned, they are playing their own, very long, game, and it is specifically not the fashion game. It has to do with building their own community and setting their own rules.

It’s an approach that has garnered a deeply loyal and highly activist fan base that, it is increasingly apparent, is more akin to the BeyHive or the Rihanna Navy than any fashion customer group. The Guess licenser has also, for example, made a bag that looks a lot like a Prada bag, but it hasn’t drawn nearly the same outrage as the faux Telfar.

That loyalty explains why, Mr. Radboy said, he and Mr. Clemens thought, when it came to Guess, “the public could decide for us.” The public did.

“Love how we stood up for Telfar and got guess up outta here,” went a tweet in response.

“It’s a great, happy ending,” Mr. Radboy said. And a lesson, perhaps, for any other brand that happened to be watching.