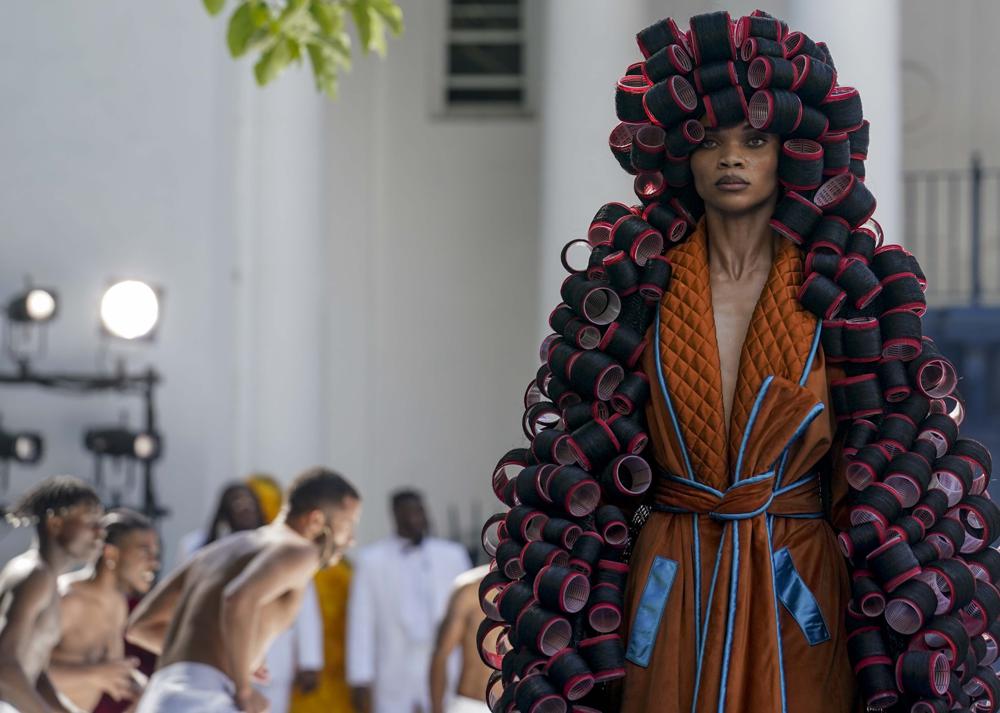 Peanut butter, hair rollers and air-conditioning units: all created by Black inventors and all part of Pyer Moss’s couture fashion show. Kerby Jean-Raymond, director of the fashion label, made history as the first Black American designer invited by France’s Chambre Syndicale to show a collection during Paris Couture Week. Jean-Raymond includes Black history in all of his work; his latest collection showcased the creations of Black inventors in a fusion of fashion, art and sculpture. The runway stood in front of the Villa Lewaro mansion, built by African American self-made millionaire and entrepreneur Madam C.J. Walker in 1917.

The event itself was almost cancelled after a rainstorm halted the first scheduled runway show. But after the storm cleared, the French officials extended couture week to make room for Pyer Moss’s much anticipated first couture show. The result was a dazzling display of Black excellence.

“It’s been a long, long process to get this where we are right now,” Jean-Raymond told the Associated Press. “But I’m very happy with the results and that the audience gave us a second chance, after that monsoon on Thursday almost wiped us out.”

Animals at the Oakland Zoo in California received COVID-19 vaccines. The experimental shot was developed by veterinary pharmaceutical company Zoetis and has been administered to the zoo’s large cats, bears and ferrets. The zoo plans to vaccinate the primates and pigs next. None of the animals have gotten COVID-19, but as restrictions begin lifting, the zoo hopes to protect its animals by taking preventative measures. Tigers Ginger and Molly were the first two recipients of the vaccine.

“We’re happy and relieved to now be able to better protect our animals with this vaccine,” Alex Herman, vice president of veterinary services at the zoo told the Associated Press.

Zoetis is donating 11,000 doses for animals in almost 70 zoos. The hope is that with the vaccines both patrons and the animals themselves can be safe when zoos reopen to normal capacity. But for now, zoo workers are masking up and administering the doses.

Guo Xinzhen was abducted outside his home in Liaocheng, China at just two and a half years old. Twenty-four years later he and his parents were reunited after a decades long search that inspired the country and resulted in more children being reunited with their parents after abduction. Ever since the awful day Guo Gangtang and Zhang Wenge discovered their son was abducted, Guo motorcycled across China to find his son. He documented part of his journey on social media, saying he cycled through 10 motorcycles, riding through 30 of China’s 34 provinces and regions to find Guo Xinzhen.

The boy was taken to a city north of his hometown and sold to a couple in central China. Guo’s journey led him and his wife to become advocates against child abduction, a common crime in China when couples wanted to ensure the gender of their child under the country’s one child rule. Over the years he aided the police in finding abducted children.

“Thank you for participating in anti-trafficking activities for 24 years and helping more than 100 children return home,” the police ministry said on its social media account.

According to a police ministry statement, police experts found Guo Xinzhen in June by searching databases for images of people who looked like he might as an adult. His identity was confirmed by a DNA test.

Guo Xinzhen is grateful for the dedication of his father. “He is a great father,” Xinzhen was quoted as saying to reporters. “I am proud of him.”