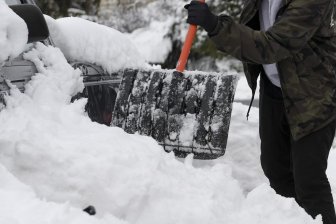 A local business has stepped up and is hoping to make things right for seniors at a Regina care home who were left empty-handed over the holidays, after being promised gift baskets they never received.

She said he told her that her care home was chosen to receive 85 gift baskets for seniors, all donated through his sponsor, a senior program.

“He was very sincere and said, you know, we feel really bad. The seniors have been through some hard times, and this is a great opportunity that we’re giving to reach out as a community,” said Jackie Harrower, Regina care home employee.

“I wanted to check and see if he was legit. I had ordered three beautiful packages that he said he was going to give to our seniors, but I ordered them for myself to see if it was a real company and I did receive the packages. They were very beautiful.”

Read more:
Dozens of Regina residents say they are out money after buying gift baskets online

But as soon as Christmas rolled around, Harrower said promises turned into excuses which left her seniors empty-handed.

Finally, on Boxing Day, Harrower said she gave him another chance after she said he messaged her saying that he had the media with him and to get ready.

“He didn’t show up and after a couple of days I said, ‘This isn’t happening is it?’ He didn’t respond back to me, there was no response.”

“I feel heartbroken that someone can really break people’s hearts like that and take advantage of a pandemic and our vulnerable seniors who are struggling right now,” Harrower said.

As it turns out, dozens of others took to social media with similar complaints. Many said they were out hundreds of dollars for gift baskets they ordered and never received. Others said they are out the money donated to the sponsor a senior program.

While some said they did receive baskets, others said they have received refunds for the baskets they never got.

But the story doesn’t end there.

After hearing Harrower’s story, Bruce said she got together with her business partner and decided to donate 75 boxes.

“We knew we had the capacity and the ability to make it right and turn a negative story into a positive story,” Bruce said.

2:07Dozens of people in Regina out money after gift baskets online

Dozens of people in Regina out money after gift baskets online – Jan 5, 2021

“We were blown away (that our vendors) reacted so quickly. They said, ‘Don’t tell us anymore, don’t ask any more questions, we are in.’ They just wanted to help and donate anyway they could,” Bruce said.

In total, Bruce said she received donations from Pickle and Bee, 21 Treats, The Balm 306, The Barn Owl Bakery and Macarons by Mallory.

“If I could do something to help these people out, it just felt right to do,” Zaphe said.

While JT Candy Creations Facebook page has disappeared after the owner Justin Newberry told Global News he was trying to make it right, those stepping up say they’re hoping to provide closure.

“I got really overwhelmed it was a hobby I didn’t expect it to go that big,” Newberry said in a phone call with Global News last week.

“This will make them so happy and I just want to say thank you for all the outreach,” Bruce said.

The seniors are set to receive the special delivery on Wednesday.