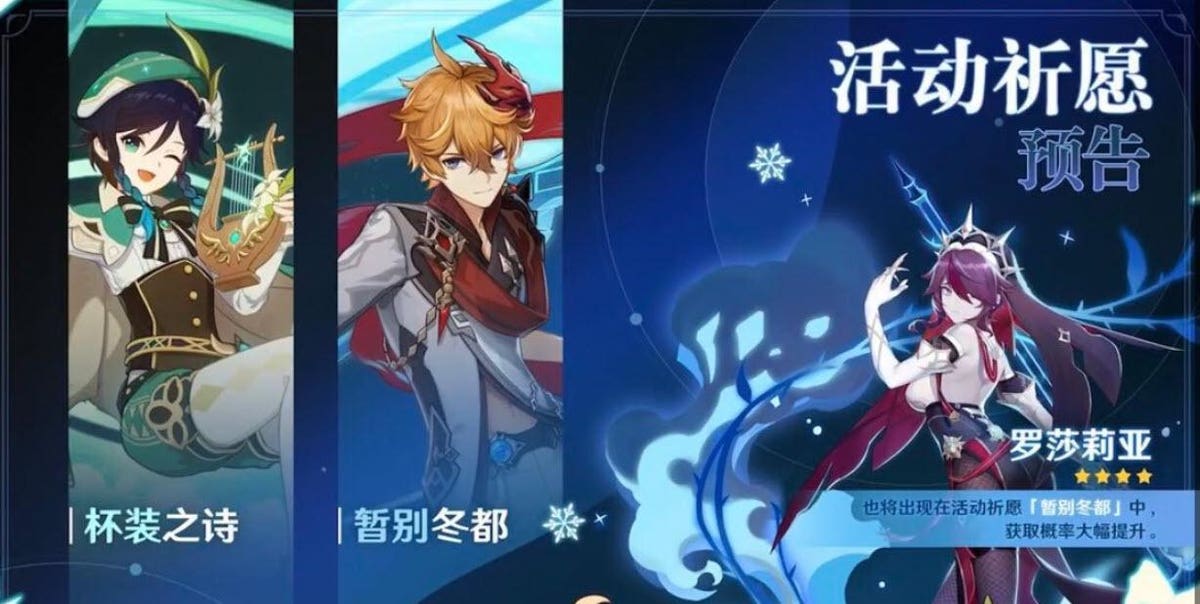 Genshin Impact has just revealed some details about the coming Update 1.4 as 1.3 starts to wind down here after the release of Hu Tao. To start with, we have three new gift codes that you can redeem for 300 primogems total, plus 50,000 Mora and some Hero’s Wit XP and Mystic Ore.

Past that, however, we learned more about the upcoming banners, and the game has taken the unusual step of new debuting any new 5 stars in 1.4. At least not with the two banners being shown.

The first banner will mark the return of Venti, which we already knew.

The second banner will mark the return of Childe (Tartaglia), and will also feature the new 4 star, Rosaria, the cryo polearm user from the Albedo questline.

Given that we have been getting three banners an update, there’s a chance that yes, we could see a new 5 star in the third banner, just like we saw Hu Tao with this one.

Genshin Impact also showed off some upcoming visual novel-type stories that will become a permanent part of the game, featuring older characters like Barbara, Noelle, Bennet and Chongyun, how exactly these will function and what the rewards will be for them are unclear, but it looks to be a departure in style from the character quests we’ve had so far. Perhaps less work to animate, if they’re in the style of visual novels.

A few other minor additions revealed in the 1.4 stream:

It’s a lot, and we still have more details all this still to come. Update 1.4 will be here in just under two weeks I believe, and there will be more previews for it ahead of that. Until then, start saving for the return of two of Genshin’s best heroes, I suppose.