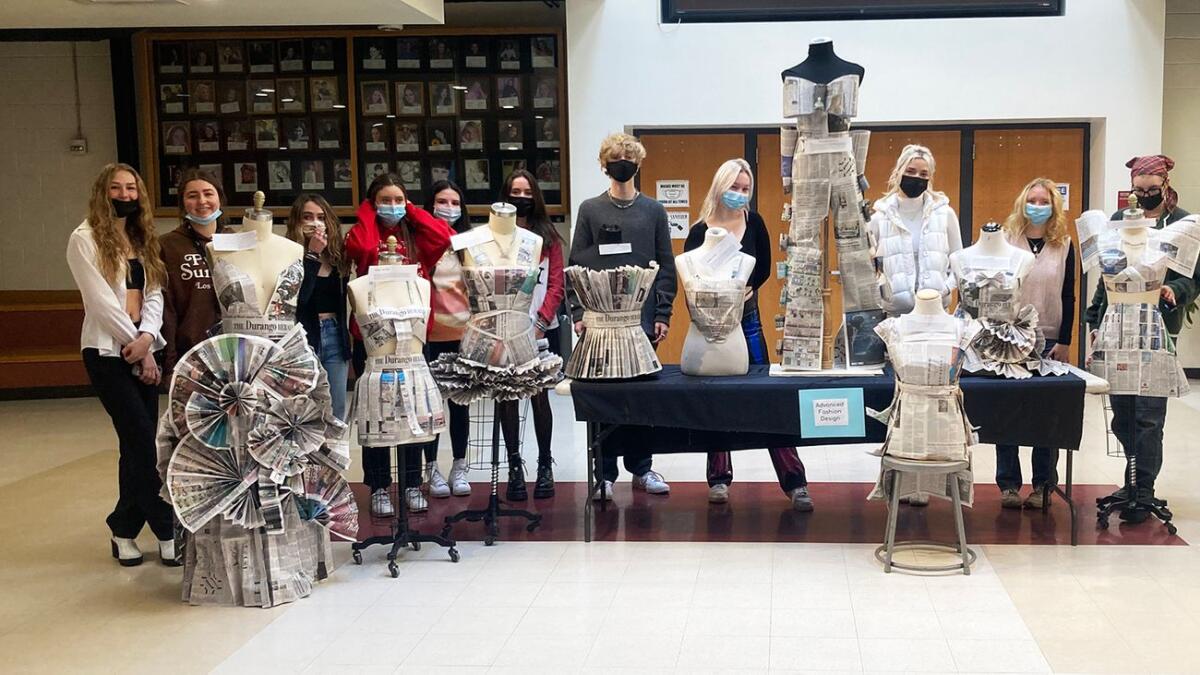 There’s that old joke about newspapers only being good for two things: wrapping fish and lining birdcages.

Fortunately for this publication, Durango High School students found a much better use for old editions — clothing designs.

Students in Kendra Bonnell’s Advanced Fashion Design class, which began a new semester Jan. 4, were given a challenge right out of the gate: Pair up (or triple up) and create unique designs using newspaper. 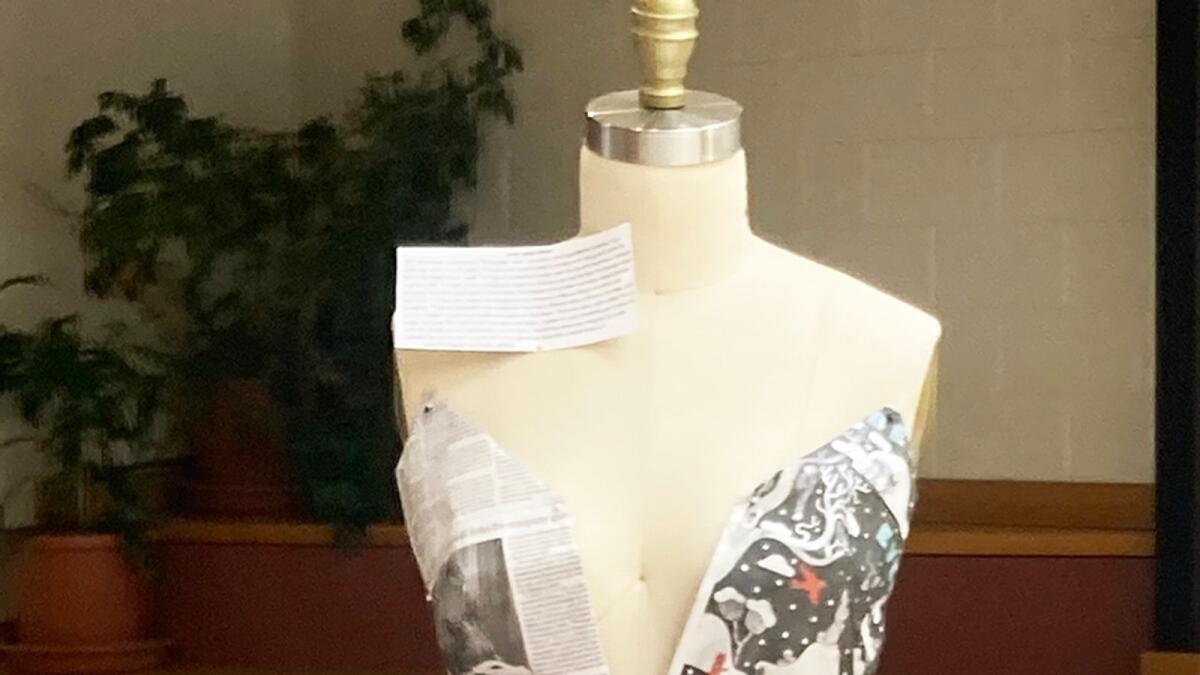 “I like to start each semester with an engaging/creative introductory project,” Bonnell said. “Because these students were in advanced fashion, I wanted to introduce them to the beginning stages of draping and have them access background knowledge from their previous fashion course by applying the elements and principles of design into their runway pitches for each outfit.”

“I was wearing a corset top that has bows on it, so Ava was like, ‘What if we just do that?’ so we just kind of went from there. We just kept on adding things to it,” she said. 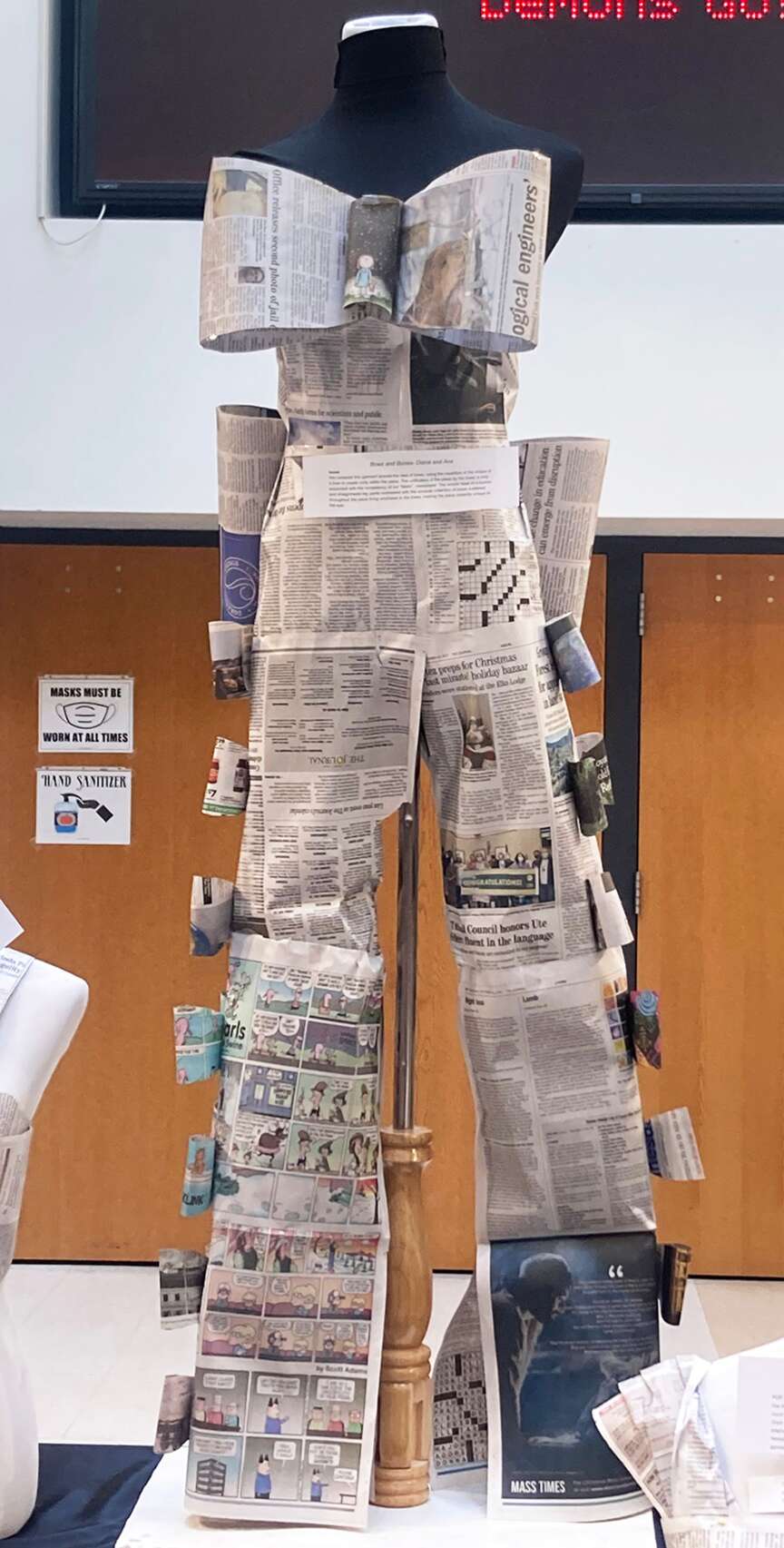 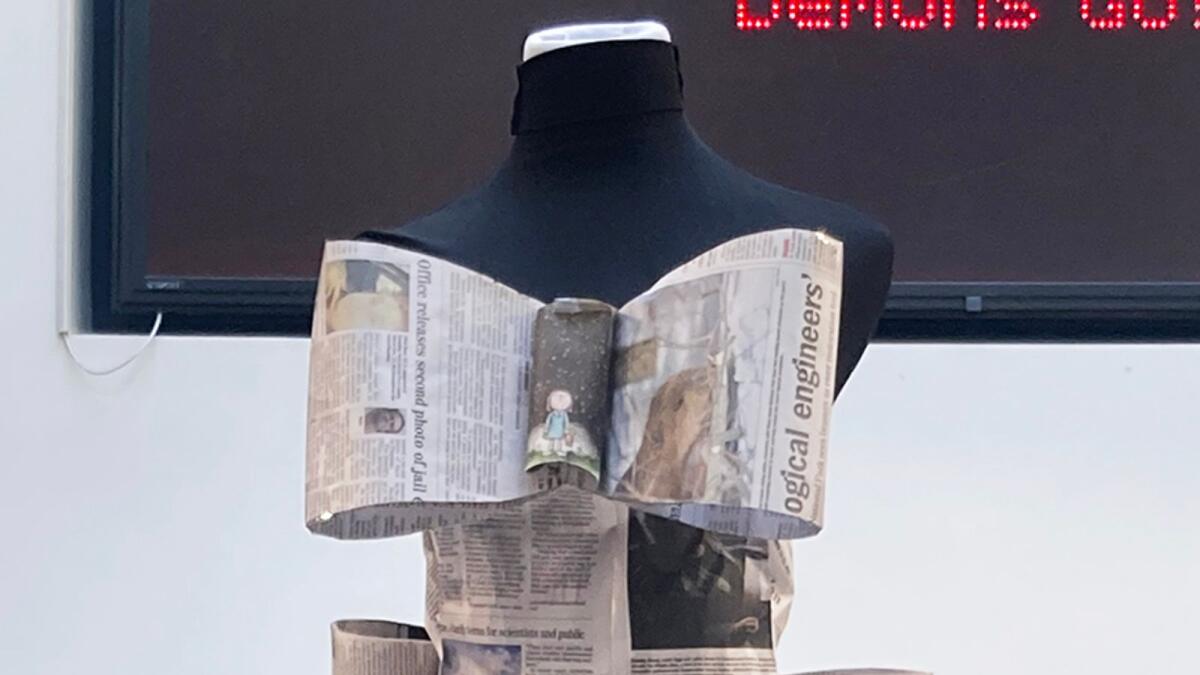 “We knew we wanted bows but made the base simple and just added (to it),” Orndorff added.

The duo also created a chest piece that mimics a human rib cage — the idea for which actually came about by a misunderstanding.

“This one we did in one class period,” Koshevoy said. “Honestly, when I heard Ava say ‘bows,’ I thought she said ‘bones,’ and I thought that’d be kind of dope, too.”

Being able to work collaboratively was one of the points of the assignment, Bonnell said. 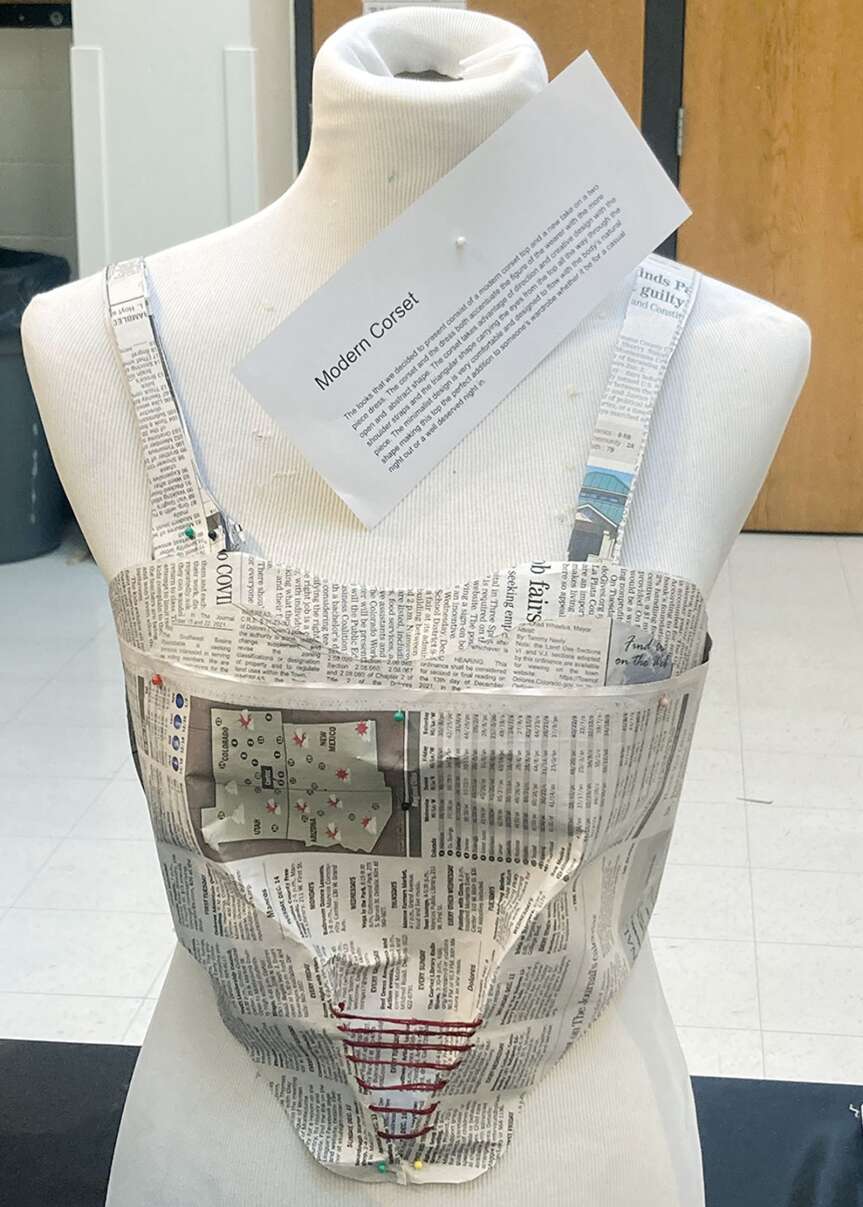 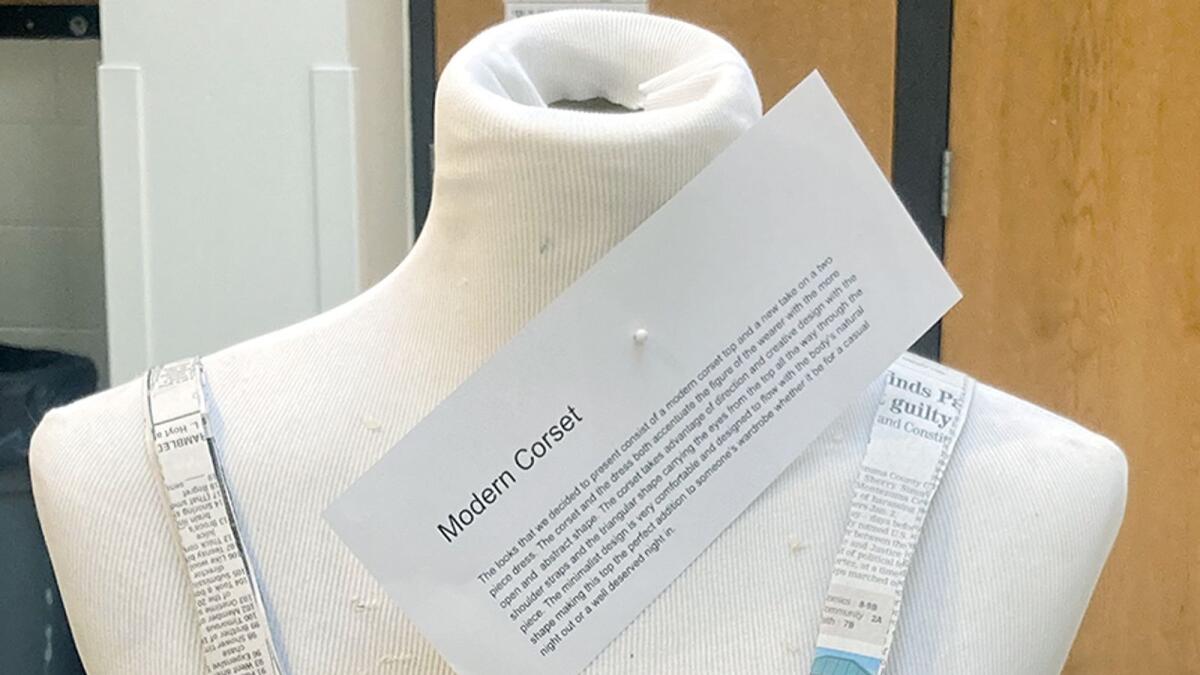 “Students build independent thinking skills, gain ownership and learn from one another when they are engaged in creative challenges,” she said.

For Sophia Kothe, Maggie Williams and Arianna Rohlf, that challenge took them back in history for their three pieces that feature bustles, big shoulders and dramatic capes.

“Maggie and I were really inspired by 17th century court wear, all of the layers and ruffles and the extravagance of it all, so with this first one right here we wanted to have it be a cocktail dress in the front and have it be all layered and poofy in the back with the blunt bustline,” Kothe, a junior, said. “With the one in the back, it was more inspired by, they call the it ‘pop renaissance’ because it’s something that you would picture Lady Gaga or Katy Perry wearing on stage, with the bullet bra and the big shoulders and just the extravagance of it all. And then our last one is probably the most, you could say, inspired by the history because of the bump in the back and hip padding and all of the layers and then the blunt bust and the shoulder cape.” 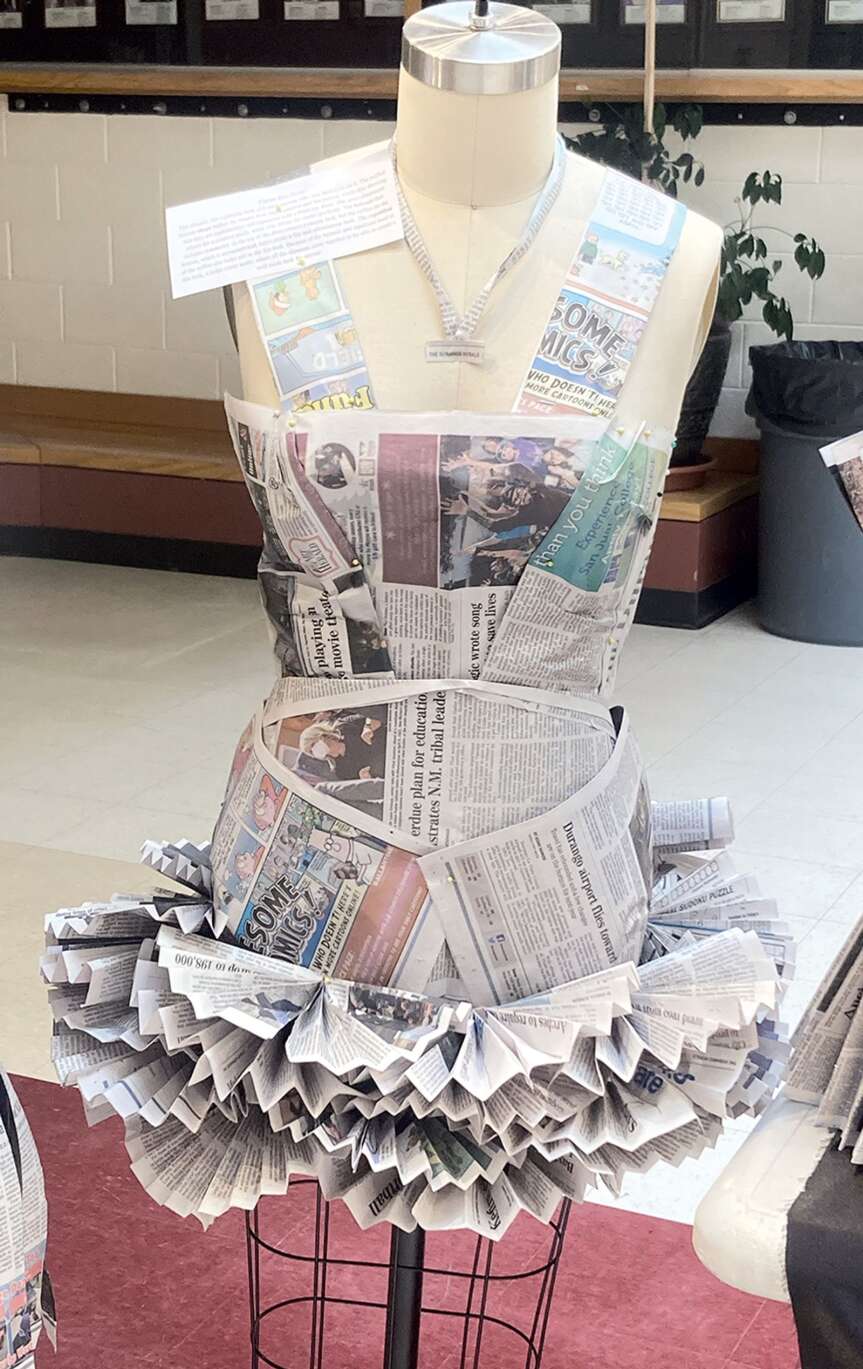 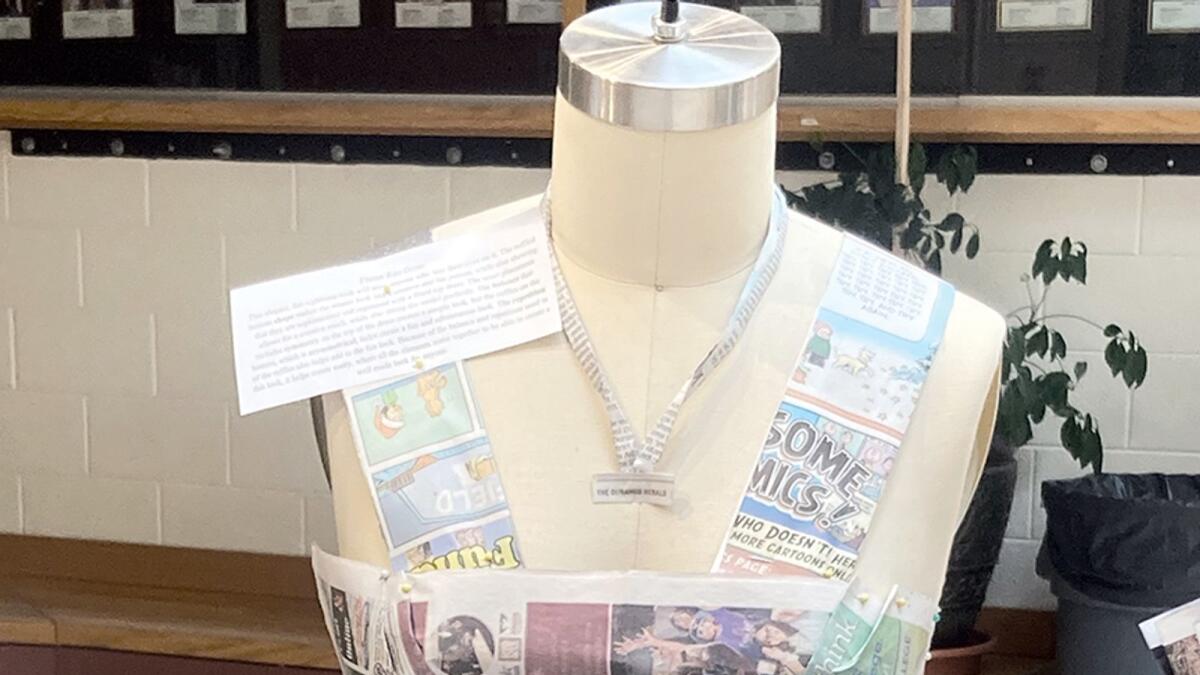 Bonnell said students are always excited to kick off a semester with a fun project instead of spending time reviewing the class syllabus and procedures. This project had the added benefit of allowing them to try their hands at a medium other than fabric.

The biggest challenge was pleating the newspapers and creating seams, she said.

Two of the students who have the paper pleating down to an art form are junior Anna Finneseth and senior Kiya Hofmann. Their floor-length gown and shorter garment feature elaborates fans.

“At the beginning of the assignment, she asked us to make a Lady Gaga-inspired dress and a more relaxed dress — that one was originally going to be our Lady Gaga one, but then we came up with this idea, and it just seemed a lot more outgoing and the fans would be something Lady Gaga would wear,” Hofmann said, adding that the gown took about three days to make while the shorter dress took a little more than a day. 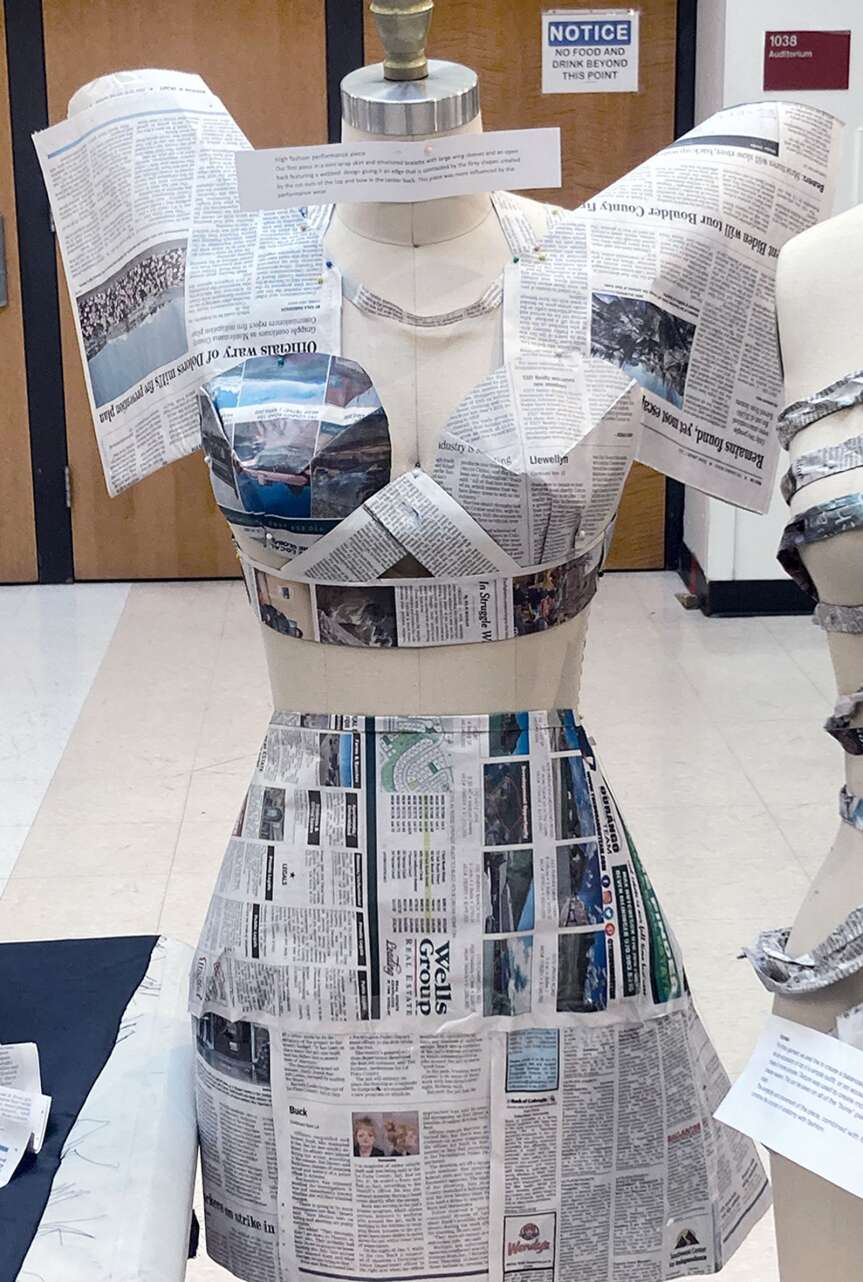 Sophia Kothe, Maggie Williams and Arianna Rohlf looked to history for inspiration for their three pieces, including this outfit. (Katie Chicklinski-Cahill/Durango Herald) 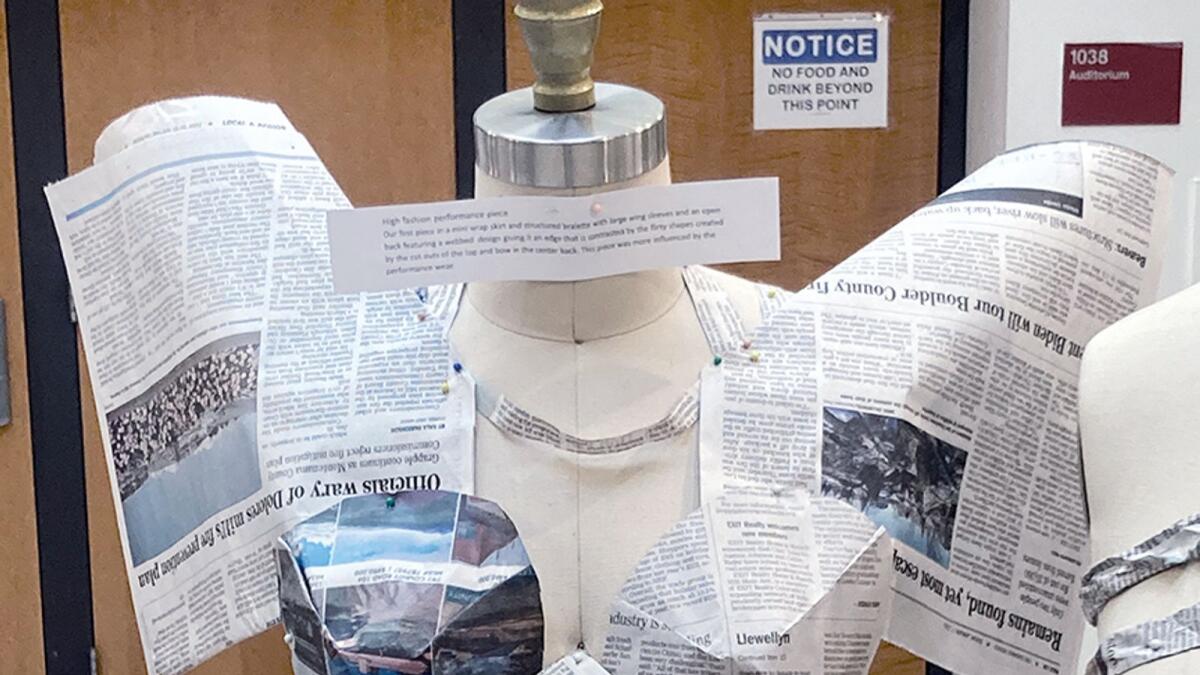 Finneseth said being tasked with working with newspaper as their medium instead of fabric added a creative challenge to the assignment.

“I think it makes us get really creative, like how we’re going to do things. Given the material we had to work with, it was like, ‘OK, how are we going to get creative with what we can do?’” she said. “Because it doesn’t bend over a body like normal, you have to think about different shapes that go around it.

And as for wearability? Would it be possible to take one of these designs and wear it out for a night downtown?

The students’ designs are currently on display in the commons area of DHS (in front of the auditorium).