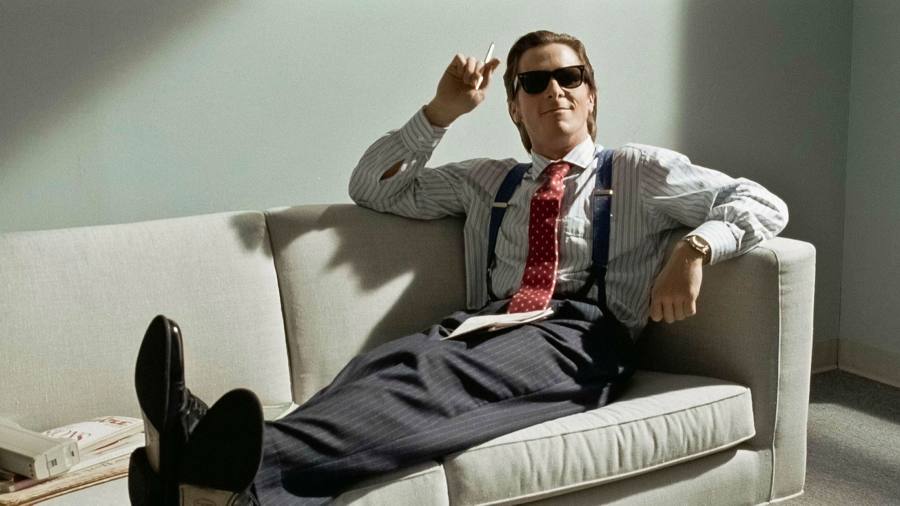 Thirty years ago, scandal broke around the publication of a book that even today remains controversial: American Psycho, a numb and numbing satire of yuppiedom where nouvelle cuisine menus, Phil Collins album reviews and ceaseless detailing of the minutiae of various designer outfits are interspersed with horrific, intensely graphic murder scenes committed by a 20-something Wall Street banker, Patrick Bateman.

Written by a then 26-year-old Bret Easton Ellis, the novel was shelved by its original publisher, Simon & Schuster, and initially only retailed from under bookshop counters, like illicit pornography. Even after it became a Hollywood movie 21 years ago, and a 2013 musical in the West End and on Broadway, the source material remains . . . uncomfortable.

Three decades on from the book’s explosive first appearance, it is interesting to question how far the world has shifted from Bateman’s familiar late-1980s cultural landscape. Greed is still good, it’s just maybe a little better hidden. Bateman’s apartment, a soulless, expensive box hung with questionable art and filled with nonsensical and overcomplicated gadgetry, still rings true: those gizmos would be a million times fiddlier with Bluetooth and WiFi.

What has changed, fundamentally, are the clothes. American Psycho is a snapshot of its time, of power ties and spread-collar shirts, extended shoulders and washed-wool trousers with a quadruple-pleated front. Fashion is central to the action in the book — every detail of every outfit is exhaustively chronicled, like a magazine credit. Indeed, some come directly from publications of the period. Bateman’s gym wardrobe — “a pair of crow-black cotton and Lycra shorts with a white waistband and side-stripes and a cotton and Lycra tank top, both by Wilkes” — is lifted entirely from the May 1988 issue of US GQ (page 221, if you’re interested).

Fashion was thus a vital component of director Mary Harron’s 2000 film of the novel. Costume designer Isis Mussenden collaborated with the Italian fashion designer Nino Cerruti and his namesake brand to recreate authentic suits from the mid-1980s for actor Christian Bale as Bateman. Cerruti had also costumed Oliver Stone’s Wall Street, so he knew what he was doing. And Bateman actually does wear Cerruti in the book.

That might not be something to boast about. There was always an intentional naffness to what Bateman wore — his overriding obsession with labels transformed him into a fashion victim, where the name was more important than the look.

Clothes make the man — Ellis’s point is that, under the surface, there isn’t much else there

One of the most famous scenes in both the novel and the film involves Bateman and his business associates valiantly outdoing each other with the refinement of typeface and font on their respective business cards. Harron could hammer the joke home: they all look exactly alike. There’s another, lesser-known scene in the book where Bateman is physically offended when someone mistakes his Armani suit for a lesser designer. Clothes make the man — Ellis’s point is that, under the surface, there isn’t much else there.

For all the fashion press proselytising around the timelessness of the suit — including by me — the descriptions of the tailoring in American Psycho sound archaic, over-elaborate. Insane, even: it’s difficult to imagine a guy rocking quite so many pleated trousers, linen suits with ostrich loafers, or a fireworks-print tie.

The clothes in Harron’s movie seem caught in a time-warp — if you didn’t know the date it was filmed, you’d guess around 1988. They are certainly entirely out of step with what most men wear today, even in the most formal of business environments pre-pandemic.

Thirty years later, I wonder how Bateman would dress now, if he were a late-twenties millennial fashion victim with disposable cash to burn. Well, if we judge by his bibles of GQ and Esquire, something entirely different. Tailoring is mixed with streetwear and sneakers — Alessandro Sartori’s Zegna collaboration with Jerry Lorenzo and Fear of God shears the suit jacket of Bateman’s beloved peaked lapels (or any lapels for that matter), with carrot-cut trousers and structureless jackets. That said, the combination of names would be appealing — as, probably, would be Dior Men’s collection with Sacai, double branded. Two labels for the price of one.

And although Bateman barely mentions sneakers — he wears a Nike pair once, during sex — today he would probably be an obsessive. He would doubtless have tried to get Dior’s limited-edition and sold-out Air Jordans, possibly as fruitlessly as he pursued a meal reservation at Dorsia, or the Adidas Yeezy 450, replacements for his elaborate loafers. Those topped a recent Lyst Index, a reflection of shopping searches by more than 150m people annually across 12,000 stores, as the most wanted men’s item.

Reading through that data, suits make no appearance, reflecting shifts in the needs but, perhaps more fundamentally, the wants of the modern equivalent of the yuppie. Bateman always followed the crowd — his urge was to fit in, to follow popularity, not buck against it. He wouldn’t be wearing Alan Flusser jackets or pinned collars any more, even if he was on Wall Street: but he would have a Moncler puffer jacket, and a Prada bucket hat and plenty of Gucci. If he was buying tailoring, some of the names would be the same: Armani, Valentino, the aforementioned Ermenegildo Zegna.

So, is the yuppie really so far away from today? Bateman’s exercise and beauty regimens are still in line with those proposed — perhaps unrealistically — by men’s magazines, advocating a few hundred abdominal crunches before breakfast (Bateman can manage 2,000) and multiple sets and reps of exercises. Those hone a truly unreal physique, emulation of which necessitated Bale exercising, intensely, six days a week when taking on the role. It’s also familiar to those flaunted today on social media by health influencers. Strip away the shoulder pads, the tasselled loafers, the dates dressed like giant black ants in original Christian Lacroix gowns, and American Psycho isn’t a million miles from right now.

In its year of publication, Ellis described the novel as “about a society in which the surface became the only thing”. If that doesn’t prophesise the rise of Instagram influence, I don’t know what does.