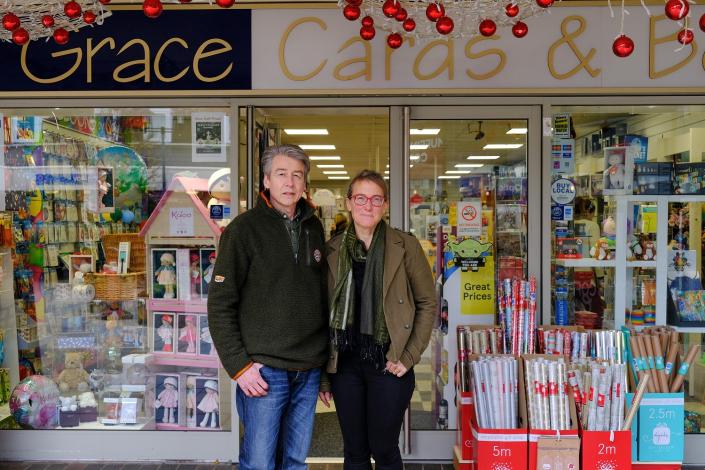 A couple who were fined £35,000 for refusing to close their gift card and book shop during last year’s COVID lockdown have said they are “over the moon” after winning a court appeal against the penalty.

Alasdair Walker-Cox, 55, and wife Lydia, 51, were penalised for remaining open despite non-essential shops being ordered to shut to stop the spread of coronavirus.

They insisted they were doing nothing wrong because they sold newspapers, snacks and baking products which were classed as “essential items”.

The couple filmed police when they entered the shop in Droitwich, Worcestershire, and ordered them to close.

They argued that Grace Cards & Books was an essential shop because they sold items which were available in WH Smith, which was allowed to stay open during the pandemic.

They couple were eventually summoned to court and charged with seven breaches of the Health Protection (Coronavirus, Restrictions) Regulations.

But the pair, who have seven children, appealed against the ruling and vowed to go to prison rather than close their shop or pay the fines.

Last Friday, Judge James Burbidge QC overturned the conviction, saying: “We allow his appeal against his conviction and sentence.”

The judge told Worcester Crown Court that the lockdowns were “difficult times” and the rules were “open to interpretation”.

During the appeal Walker-Cox, who has run the shop with his wife for 30 years, admitted he “disagreed” with the lockdown rules.

Speaking after the case, he said: “We are of course over the moon with the result.

“This has been going on for a very long time. We never believed it should have gone to court and always believed we were in the right.

“We have not decided yet whether to seek compensation. At the moment we just want to open and run our shop as we have always done.”

The couple were served with numerous prohibition notices during the second and third lockdowns last year.

During their trial at Kidderminster Magistrates’ Court last August, the couple were accused of using fizzy drinks to “flout regulations”.

Prosecutor Howard Leithead, said: “Any shop can set up a few drinks and sell newspapers to become a newsagents – this clearly wasn’t a newsagents.

“It sends a signal that it is easy to flout regulations.

“The shop is a called a card and book shop that is exactly what it is.”

Walker-Cox told the court that he and his wife had compared their business to others, such as WH Smith, and decided to stay open.

He said: “We noticed WH Smith were open and we sold similar items to them so we remained open. We could increase our offerings of essential goods.

“We have lots of cake making materials and we sold drinks before lockdown and brought a Coca-Cola refrigerator.

“It was dismissed by the council as not being essential.

“After a visit on the 19th February by the council, we sought guidance from the council about how we could go about being an essential offering.

Top specialties as gifts in Binh Dinh are the most famous, don’t miss it » Breaking News, Latest World News Updates

Mrs… At Last! Wedding Subscription Box Is The One Wedding Gift That Every Bride To Be Needs.

Mar 5, 2022 Jesika
We use cookies on our website to give you the most relevant experience by remembering your preferences and repeat visits. By clicking “Accept All”, you consent to the use of ALL the cookies. However, you may visit "Cookie Settings" to provide a controlled consent.
Cookie SettingsAccept All
Manage consent