Ceramics Are in Fashion – The New York Times 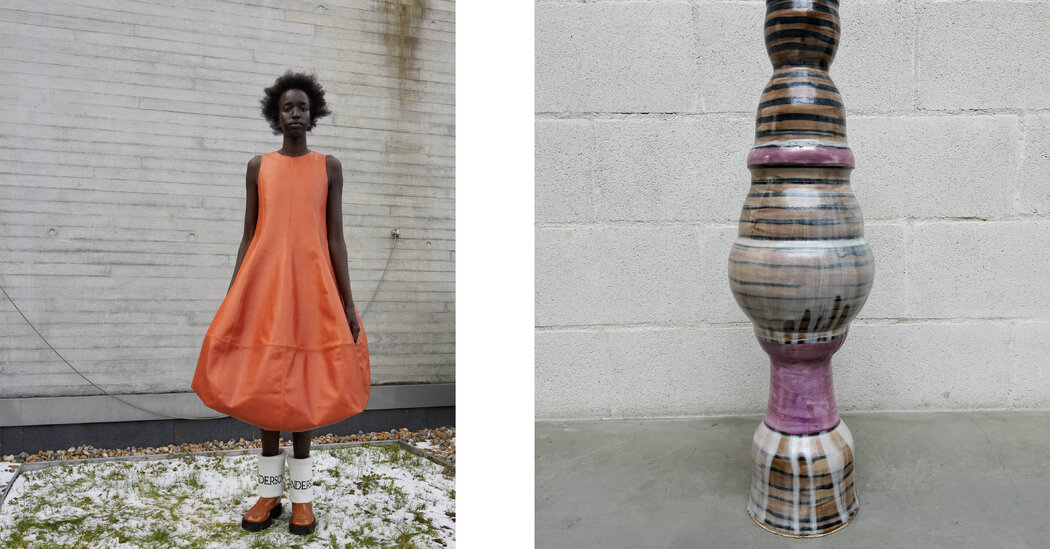 The fashion designer Jonathan Anderson has always valued the relationship between ceramic forms and fashion.

In December, he curated an exhibition of ceramics and porcelain by Akiko Hirai, titled “Setting a Hare in the China Shop,” at the JW Anderson shop in London and, in February, collaborated with the ceramic artists Magdalene Odundo and Shawanda Corbett for the label’s fall 2021 collection and presentation.

Photographed by Juergen Teller, the project included a series of JW Anderson women’s wear looks, still-life images and sketches of Ms. Odundo and Ms. Corbett’s ceramics, as well as their portraits, and blankets designed as part of the collaboration.

“I was really obsessed by this idea of silhouette and form,” Mr. Anderson wrote in an email. “Working with them and their art was an inspiration and incredible sort of sounding board for me while creating the collection.”

When London briefly reopened last summer the designer had been able to spend time with Ms. Odundo and to discover the sculptural work of the American-born Ms. Corbett.

The common thread between the two artists is their exploration of the body, its physicality and the idea of pots as vessels of information. “I often visualize the stances I wish to capture in my ceramic vessel,” Ms. Odundo wrote in an email. “I thought the collaborative project would complement our interest in the human figure.”

Fashion and art have long had a close bond, dating from collaborations such as that of Elsa Schiaparelli and Salvador Dalí in the 1930s. But sculpture lately has become a point of interest for designers.

For example, since his arrival at Celine in 2018, Hedi Slimane has commissioned a number of sculptors — James Balmforth and Oscar Tuazon among them — to create in-store installations, which typically have been described as Brutalist in style.

And over the past year, a new crop of collaborations between designers and artists has turned a spotlight on ceramic sculptures characterized by organic and biomorphic forms.

Lisa Z. Morgan, head of the apparel design department at the Rhode Island School of Design, said the trend was connected with a desire for haptic experiences. “I think in this moment where, you know, there’s so much fear, there’s so much sterility really — I mean we’ve kind of moved into this space where you know hand sanitizer is the smell we’re smelling. I think we’re craving that sort of proximity,” she said, “almost you can sense touch, you know, through the looking.”

Kris Van Assche, artistic director at Berluti, the French heritage house known for its legacy in leather craft, found that having to present his work through screens and digital formats had attracted him to the handmade more than ever before.

“This period has made it more difficult to communicate on the difference between the high-end luxury Berluti stands for,” Mr. Van Assche wrote in an email, “because people can’t see the collection for real, touch the fabrics, see the details.”

An interest in French ceramics led him to the work of the Los Angeles-based sculptor Brian Rochefort who is known for volcanic-looking ceramics that he has created between trips to Latin America and East Africa. “I have developed these sculptures and these vessels,” Mr. Rochefort said, “that are more like abstract memories of the places that I have been. The textures, the colors — everything I can remember.”

Mr. Van Assche said that he admired Mr. Rochefort’s unconventional and free approach to the craft of ceramics, and that “working with an artist who is very much ‘hands on’” was part of the message he wanted to convey at Berluti. A collaboration was conceived, and the results were introduced in the spring 2021 collection.

“His work,” wrote Mr. Van Assche, “is the result of an accumulation of texture and color, layer after layer, and in a conceptual way, it reminded me of how the artisans at Berluti go about patina, also layer after layer.”

And, he added, “There is something very joyful in the color explosion of Brian’s work, which felt like a good remedy for the times we live in.”

Mr. Rochefort said he sent about 75 photographs to Mr. Van Assche, who then went about turning the designs into knitted sweatshirts and printed silk shirts and jackets.

For the London jeweler Jessica McCormack, the events of the past year gave her the time to put into action what had been a continuing conversation with the artists Nikolai and Simon Haas. She had met the twin brothers through a friend eight years before, and had commissioned a lamp for her store in a Mayfair townhouse.

Although discussions about a project had begun 18 months ago, as Ms. McCormack said, “Everyone’s always got a million things.”

A series of collectible ceramic jewelry sculptures called Fairy Berries, set with a range of round brilliant-cut diamonds and mounted on brass pedestals debuted late last year, along with a small jewelry collection and a jewelry box.

“It’s very beautiful and a very well-made, serious craft that they do,” Ms. McCormack said, “but it’s fun and I think maybe that’s what I try and do with jewelry. It is serious because it’s investment and time and money, but it can still be fun and joyful and a happy thing.”