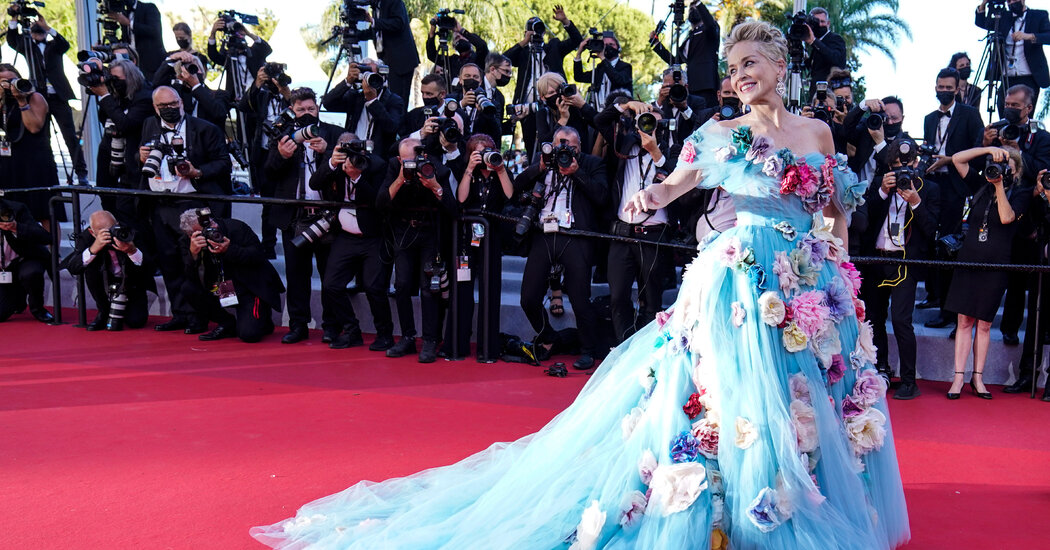 The Cannes Film Festival that just ended was notable for a number of things (besides simply being the first Cannes Film Festival since 2019): That a female director won the Palme d’Or for the first time since 1993; Jodie Foster’s special award; Adam Driver’s singing in “Annette.” And the fact that it was proof positive, if anyone was in doubt, that the year of the nontraveling sweatpants has well and truly come to a close.

Like, put a stiletto in that one and stick it to the wall-of-history close.

If the Oscars kicked off the Return of the Red Carpet, Cannes took it to a whole other level. For 10 days the plumage was out: tulle and tuxedos, glitter and glamour, as if to make up for dressing down of the last, lost year. This film festival, of all film festivals, has become the greatest real life — or real life-ish — runway of the year, other than the Met Gala. Perhaps even more than the Met Gala, which can be handicapped by sometimes silly theme.

And that means that all of those pundits who predicted the party of the century as we begin to emerge from the pandemic may be right. Because when the last lights dimmed and the final reviews came in and the celebrities dispersed, these are the trends and images that remained.

1. Big Gowns and Heels Are Back

Despite the rampant speculation that the last 16 months of isolation forever altered our sense of what we are willing to sacrifice for glory, apparently all thoughts of comfort clothing go out the window when it comes to making an entrance.

Instead, in the city by the Croisette the skirts were big (often, the bigger, the better), the waists corseted and the heels very, very high. The goddess gowns of Dior were so ubiquitous they were practically a uniform, Sharon Stone seemed to have planted a minor garden on her massive Dolce & Gabbana tulle number, and Jodie Turner-Smith’s Gucci train looked as if her hemline had gotten caught in frothing bubble bath that was then dragging behind.

Even the casual day looks — Marion Cotillard in Chanel overalls; Maria Bakalova in Vuitton tunic and shorts — could practically have qualified as cocktail-wear but a few months ago.

2. So Is the Fantasy Tux

Being president of the Cannes grand jury means being present at pretty much every premiere and award ceremony, which means being ubiquitous at almost every fancy photo op — which means wearing a lot of clothes.

Spike Lee may have messed up his announcement of the Palme d’Or winner (oops), but when it came to his wardrobe choices, he won the day, pretty much every day. For a while it was hard to imagine he could top the purple suits he wore to the 2019 and 2020 Oscars in honor of Prince and Kobe Bryant, respectively, but the hot pink Louis Vuitton look he chose for the opening day — along with matching sunglasses and coordinating Air Jordans — came pretty close.

Especially because it was followed by a black suit with bright red buttons, black shoes with red laces and a green, red and black beret; a “houndstooth” suit with a pattern actually made from little basketball players; and a suit for the final ceremony that looked as if the sky at sunset had been silk-screened on one side.

The days of the penguin suit (which, after all, is a sort of comfort dressing in itself, being the safest possible option) may be numbered.

3. You Are What You Wear

When the team behind “The French Dispatch” — the stars Tilda Swinton, Bill Murray and Timothée Chalamet and the director Wes Anderson — appeared for an afternoon photo call, the extreme variety of their outfit choices became a sort of Rorschach test for pretty much any personality type.

A frenzy of memes ensued, comparing them to everything from Beatles’ albums to journalism and even vaccine statuses. Which is pretty much all the evidence anyone should need that what you wear can definitely type you.

4. Surrealism Is a Look

Schiaparelli, a.k.a. the brand Surrealism built, has been making a name for itself as the dark horse of statement dressing since the start of the year, when Lady Gaga wore a Schiap number for her performance at the Biden presidential inauguration. And Bella Hadid’s appearance at Cannes in a straight-from-the-couture-presentation look was another notch on the house’s belt. Effectively catnip for paparazzi, the simple long black dress featured a neckline that dipped to the upper rib cage, exposing a gold “necklace” of branching alveoli in the shape of lungs just dense enough to cover — well, the lungs.

Now that the fashion-Hollywood industrial complex is back in full flow (scanning the brands behind the looks is pretty much like taking a stroll past the shops of Avenue Montaigne), it seems pretty clear that Schiap has become a serious contender. This one left ‘em all a little breathless, anyway.

5. But Family Is the Best Accessory

Forget handbags; the hottest accessory on the Croisette was a close family member.

Sean Penn was there with his daughter Dylan Penn and son Hopper Penn; Danny Moder (Julia Roberts’s husband), with their daughter Hazel Moder; and Tilda Swinton with her daughter Honor Swinton Byrne.

Though the quintessential pairing may have been Jane Birkin and Charlotte Gainsbourg, who appeared in matching well-worn denim, a.k.a., the Canadian tuxedo, for day and actual tuxedos (by Celine and Saint Laurent, respectively) at night.

Apparently, the family that films together, dresses together. Taste connects us, in all sorts of ways.