Artifacts of the Lost Year 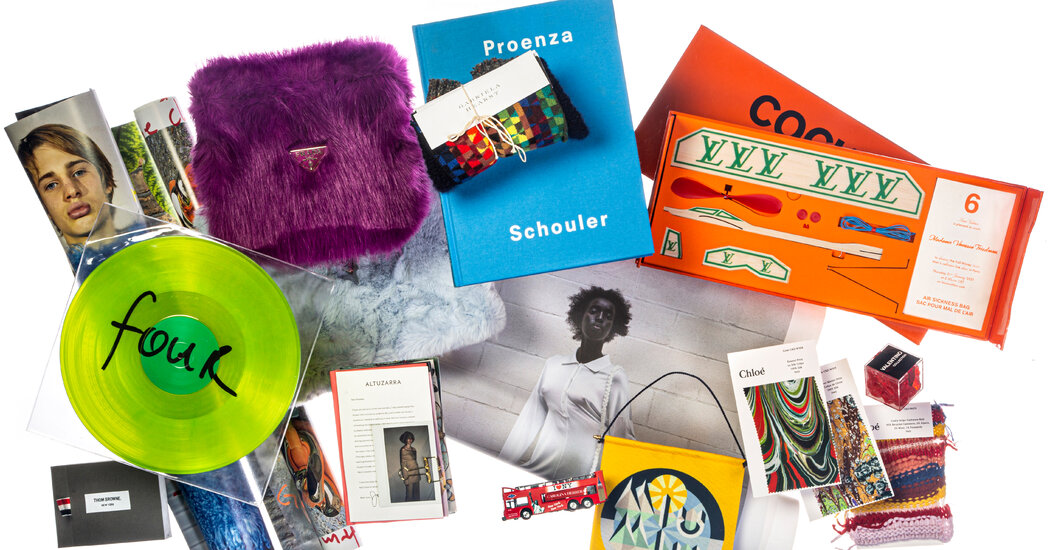 The packages started arriving at my door last September: thick cardboard invitations to digital shows packed in tissue inside boxes inside shopping bags, sometimes nestled next to extra gewgaws like candy or buttons or candles, sometimes layered atop books. They were care packages from across the ocean and the city, Proustian madeleines meant to jog the memory and senses so that, sitting at our desks or beds or kitchen tables, wherever we “attended” the virtual fashion shows, we could imagine ourselves sitting on benches runway-side, as we once did.

One day my doorbell rang, and a messenger handed over a brown paper bag containing two more brown bags, each of which contained a single croissant, from a brand theoretically committed to sustainability.

This is the last straw, I said to my husband. What a waste. A waste of money and a literal waste, all that packaging and promotional material destined straight for the recycling bin. (Admittedly, we happily ate the candy.)

But then the show-in-a-box, from JW Anderson, arrived: a do-it-yourself construction set of paper dolls (models photographed in the collection and then shrunk down), backgrounds and accessories, to create your very own diorama.

And then came a book that memorialized an empty New York, with models silhouetted against the echoing skyline and street scenes, from Proenza Schouler. And then I started to think about all the … stuff … in a slightly different light.

Two seasons and many months in, it is no longer actually just stuff. It’s more like a memorial of a sad, lost year; a year marked by absence — of people, places, experiences — captured by random physical things.

“When everything has gone virtual, the object becomes the repository of a moment,” said Steven Lubar, a professor of American studies at Brown University and author of “Inside the Lost Museum.” Even if it’s a doohickey without any particular monetary value.

Such items are, said Clara Berg, the curator of collections at the Museum of History & Industry in Seattle, “witnesses to history.”

“This year we all collectively understood we were living through something important,” she said. “We will want to remember it and preserve items for the future to tell people what it was like.”

After all, if fashion teaches us anything, it is how easy it is to forget, even with a physical object left behind as an aide-mémoire. As each season arrives on the runway, each new designer at a house, out goes the old and in comes the new.

But it also reveals just how much of a personal narrative can be contained in a dress or a blouse or a bag; how simply seeing it can bring back, viscerally, a moment in time. Like the moment when we were forced to live largely online.

Virtual fashion shows, it turns out, are even more ephemeral than actual ephemera. Seen for a moment, they disappear into the digital maw even faster, everything blending together into a sea of pixels. Very little of it lingers in the mind (even less than what used to linger from the crazed cycle of physical shows). When everything is on Zoom, it’s all equal, meaning it’s almost impossible for anything to stand out.

Unless, that is, it can actually stand.

Questions surrounding the meaning of artifacts go all the way back to Aristotle, who wrestled with them in his “Metaphysics,” and our understanding of their importance has waxed and waned over the centuries. During the last great pandemic — the flu of 1918 — “almost nobody saved anything,” Mr. Lubar said. “The country was desperate to forget.”

After 9/11, he said, that changed. Now we are at another such point, when everyone is “thinking about history,” he said. “There’s a large collection of masks in almost every museum right now.”

The designer who understood this most intrinsically was unquestionably Jonathan Anderson, who treated each of the shows he created for the three brands he works with (JW Anderson, Loewe and Moncler) as a potential future archaeological find.

What began with a show-in-a-box evolved into a gallery-in-a-book, a show-on-a-wall (complete with D.I.Y. wallpaper and a glue brush), a show-on-a-shirt (a giant T-shirt plastered with looks), an artist collaboration in poster form and a broadsheet newspaper delivered within the daily newspapers of thousands of people around the world. All of it an experiment in corporeality.

“I just didn’t see how you could build an emotional connection with a moving image on a screen if that’s all there is,” Mr. Anderson said during a conversation via, yes, Zoom before the newspaper was delivered.

“Netflix, email, Zoom — it’s all in one place, so no matter what you do, it never stands out,” he said. “I felt at least with an object, it occupies space and a moment in time. You interact with it physically. It becomes part of the record.”

It demands engagement and consideration; represents not only the touch of whomever made it, but the touch of the person who received it. In that, his work became more than a souvenir, but rather an exercise that forced everybody to become anthropologists unto themselves. We were already excavating when we started opening the mail.

(Speaking of mail: Ms. Berg said that one of the objects the Museum of History & Industry has acquired is a stimulus check.)

I was never a collector of fashion season memorabilia like some of my peers; I used to shed show invitations and news releases as soon as the lights went down on a runway, as if crossing them off a to-do list. As my bag got lighter, so did my psyche.

But like so much else this inverted year, my practice has changed. I’ve barely bought anything, but I’ve begun to amass these vessels of memory. Think of them as amphorae, the fashion version.

Gradually, I started to pick and choose: a copy of “Dune” from Joseph Altuzarra, annotated with swatches and notes that reflect the relationship between fiction and fashion. Packets of fabric from Gabriela Hearst’s debut at Chloé that seemed like tactile snippets from the future.

The kitschy faux fur boxes from Prada, covered in the same bright polyester fluff as the sets, that looked like little Pokémon pets. A flip book from Thom Browne that pictured an old-fashioned skier shooting downhill. A toy bus from Carolina Herrera, and a balsa wood D.I.Y. airplane complete with airsickness bag from Louis Vuitton, that seemed to symbolize a time when we were free to travel without thought. Tarot cards from Dior to predict what is to come. A mock TV Guide from Coach that added some levity to the fact that we are all living vicariously through our televisions (or what passes for that now).

There’s no financial value attached to any of it — it wasn’t made for sale, the materials aren’t precious — but together they form a sort of reliquary. I see them and see the human desire to create and the stubbornness of hope. Neither is, in the end, a disposable idea.