Apple is researching a number of unique iPhone cases that can charge AirPods, as well as other accessories, according to newly-granted patent filings.

The patent, spotted by AppleInsider, titled “Cases and folios for carrying and charging accessories” and was granted by the United States Patent and Trademark Office. While the patent predominantly “relates to a case for retaining a portable electronic device and an accessory,” suggesting that it could apply for virtually any external accessory, the majority of the images included in the filing clearly feature ‌AirPods‌.

The filing outlines a wide range of different configurations for storing and charging ‌AirPods‌ or other electronic accessories within an ‌iPhone‌ case, including “a folio, a wallet, a flap, a cover, an enclosure, a holster, a clip, a sleeve, an armband, or suitable combination hereof.” Specifically, it covers cases with “a cavity that generally corresponds to the dimension of an accessory” and a number of terminals, as well as a battery.

If the case variant contains a battery, it can be charged via a terminal from the device in the case. This battery can then charge accessories via another terminal. Apple also highlighted that cases could communicate with the device inside and accessories via NFC and have “a slotted compartment to store money and credit cards.”

One of the main designs for the case depicts ‌AirPods‌ being charged within a long, raised section on the front of a folio. 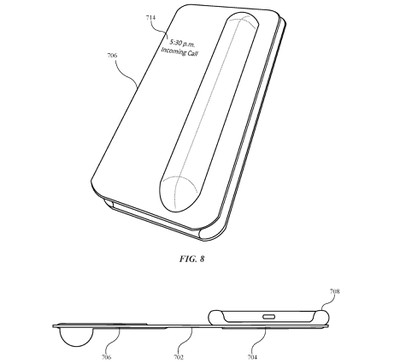 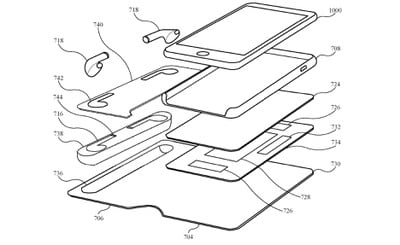 Another less well-developed case design features “two openings, one at each end for receiving accessory devices,” on the top of a case. Each opening contains “a charging terminal in between for energy transfer between the receptacle and the accessory devices.” ‌AirPods‌ or other accessories “can be retained through frictional fit, magnetic coupling, or both.”

Unlike the folio design, this variant is less invasive and more lightweight. However, it leaves much of the ‌AirPods‌ exposed and offers less protection. It is also unclear if this slimmer design is able to include a battery for charging, or if it solely relies on the ‌iPhone‌ itself for power. 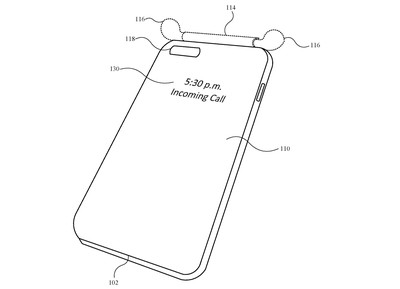 Other case variants visualize ‌AirPods‌ being charged on the back of a case in a design that appears to be similar to the MagSafe Wallet. 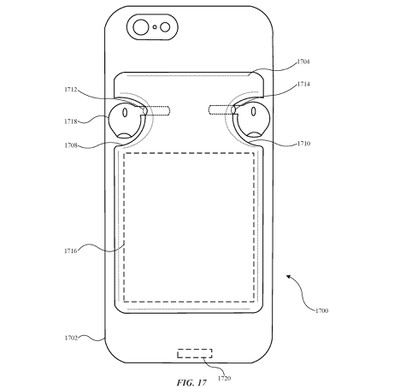 It may be important to contextualize this patent with the understanding that Apple is increasingly interested in its accessories segment, which has been bolstered in recent years with Apple Watch bands and ‌MagSafe‌ accessories. While patent filings do not necessarily prove what Apple is intending to implement on a consumer product and the contents of many patents never come to market, an ‌iPhone‌ case that can stow ‌AirPods‌ does not seem to be an unfeasible product.

In light of its expanding selection of accessories and increasingly modular approach, an ‌iPhone‌ case for ‌AirPods‌ could offer a compelling option for users that frequently travel with both devices, should Apple ever choose to release the product.

We use cookies on our website to give you the most relevant experience by remembering your preferences and repeat visits. By clicking “Accept”, you consent to the use of ALL the cookies.
Cookie settingsACCEPT
Manage consent

This website uses cookies to improve your experience while you navigate through the website. Out of these, the cookies that are categorized as necessary are stored on your browser as they are essential for the working of basic functionalities of the website. We also use third-party cookies that help us analyze and understand how you use this website. These cookies will be stored in your browser only with your consent. You also have the option to opt-out of these cookies. But opting out of some of these cookies may affect your browsing experience.
Necessary Always Enabled

Any cookies that may not be particularly necessary for the website to function and is used specifically to collect user personal data via analytics, ads, other embedded contents are termed as non-necessary cookies. It is mandatory to procure user consent prior to running these cookies on your website.