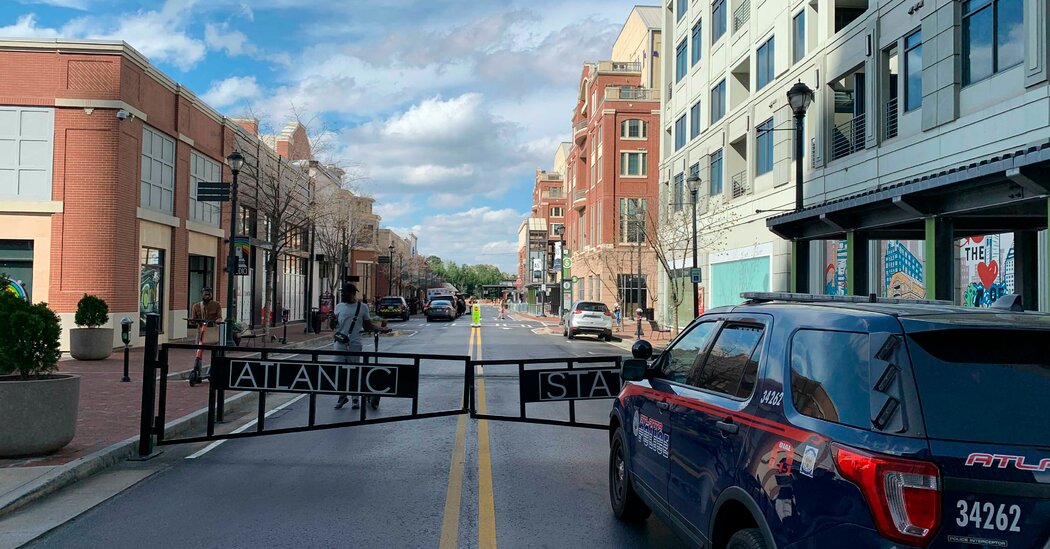 Then he walked out into the store.

Police, tipped off by an alarmed shopper in the bathroom, soon stopped him. But the incident, just three miles from the site of one of the shootings last week that left eight people dead and coming two days after a man stormed a grocery store in Boulder, Colo., and killed 10, sent new waves of unease throughout greater Atlanta and also raised nationwide fears of copycat crimes.

Though there has been no indication that Mr. Marley, 22, who was arrested at the store, was influenced by the two mass shootings, Jillian Peterson, an associate professor of criminal justice at Hamline University in St. Paul, Minn., said she feared a rise in similar attacks after nearly a year without such crimes in the U.S.

Last week’s rampage in Atlanta, by a lone gunman who opened fire at three massage parlors, killing eight, including six women of Asian descent, may have “flipped this switch back on,” Dr. Peterson said, and influenced others to commit similar massacres.

In another scare on Thursday, University of Kentucky police arrested a man in a parking lot of the school’s Chandler Hospital. He was wearing body armor and in possession of multiple handguns. The authorities said he had what were believed to be two explosive devices in his vehicle.

The pair of mass shootings, just six days apart, was a return of the most unwelcome kind of rerun. Last year in the U.S. was shockingly violent, with nearly 20,000 deaths from gun violence and another 24,000 gun suicides, the highest toll in decades. But mass shootings — as defined by some researchers as the killing of four or more people in a public setting by an unrelated shooter — all but disappeared during the coronavirus pandemic.

From the end of last March until this month, there were no shootings that fit that definition, said Dr. Peterson, a co-founder of the Violence Project, a research center that studies gun violence. This was particularly striking given that the years leading up to the pandemic — 2018 and 2019 — were the worst years on record.

Mass shootings tend to happen in clusters of two or three, she said, and research has shown that after one happens, the risk of another is elevated for about two weeks. This is due in part to the attention that the shooters receive in the media, a notoriety that a person somewhere else in the country might quietly be yearning for.

“The more media coverage, the more the perpetrator’s face and message is everywhere, and people are talking about it,” Dr. Peterson said, the more a potential shooter begins thinking, “I could be that person that they are talking about. My grievance can be aired to the world.”

It is difficult to prove why this pattern holds, Dr. Peterson said, especially as many mass shooters do not survive to reveal their motives. But the statistical correlation is clear.

Less than 1 percent of gun casualties come from mass shootings, she said. Still, the absence in 2020 was a rare bright spot in a year marked by gun violence. This pause could be attributed to several things. For one, “the opportunity wasn’t there,” she said. “Schools weren’t open, people weren’t going to work.”

But in addition, she added, “mass shooters, they have this grievance with the world where they feel like they haven’t been given what they were due and everybody else has these things that they wanted to have. And then they find a specific thing to blame for that anger.”

In the midst of a pandemic, when millions were losing jobs and hundreds of thousands were dying, and nearly everyone was hurting to some degree, she said, “I wonder if people were feeling less individually aggrieved.”

This sense of shared suffering has already begun to dissipate, and psychologists are concerned about what awaits. So many of the known risk factors for mass shootings —economic hardship, exposure to family violence, isolation, time spent online, a surge in weapons sales — were exacerbated over the course of the pandemic.

“All these things have been increasing, but we just haven’t had the opportunity there,” Dr. Peterson said. “I’m worried that once we create the opportunity, we’ve got all these people kind of ready to boil over.”

In Kentucky on Thursday, campus police had been alerted by the Versailles, Ky., police department about a man “thought to be armed and dangerous” who was visiting a family member at the university’s Chandler Hospital, according to a school statement.

As the authorities tried to find the man, Bryan Carroll, the school issued an alert to the campus community urging them to avoid the hospital area, and the emergency department lobby of the hospital was locked down.

According to booking records, Mr. Carroll was arrested on suspicion of numerous crimes, including drug possession, handgun possession by a felon, evading police and numerous counts related to possession of a “weapon of mass destruction.”

In Atlanta, Mr. Marley remained in custody at the Fulton County jail, charged with several counts of criminal attempt to commit a felony and possession of a firearm during the commission of a felony. Court documents did not speculate on Mr. Marley’s motive for walking into the store with so many weapons, and he waived his first appearance in court on Thursday.

Georgia allows people to carry a handgun if they have the proper license, according to the Giffords Law Center. The law also allows people to carry long guns without a license, provided that, if loaded, the weapon is carried openly. In court records, the authorities argued that Mr. Marley took a “substantial step of the crime of aggravated assault” by entering the store, arming himself and donning the body armor.

Fulton County Magistrate Judge Rashida Oliver said Mr. Marley would remain jailed without bond because he constituted “a dangerous risk to the community at large.”

Records show that Mr. Marley was arrested in May 2018 in nearby DeKalb County on a charge of theft by receiving stolen property and that he pleaded guilty that same year to two misdemeanor charges of simple assault and disorderly conduct.

On Wednesday, around the time of Mr. Marley’s arrest at about 1:45 p.m., there was a call to evacuate the grocery store, set in Atlantic Station, a popular outdoor shopping mall. Records show that a number of workers ran outside, panicked. Atlantic Station management said that they shut down the streets of the shopping district, as well as a parking deck, while authorities also investigated a suspicious package.

On Thursday morning, Officer Steve Avery, a spokesman for the Atlanta Police Department, said that the suspicious package was checked out and did not contain hazardous items. “At this time there is no indication it was related to Rico Marley,” Mr. Avery said in an email.

At lunchtime on Thursday, the scene at Atlantic Station was relatively calm. On a gray and windy day, a few groups of people wandered out of restaurants. A lone police officer stood outside of the Publix. Inside, workers said they were not authorized to comment.

A few doors down at an eyeglass store, Tom Legato, 49, an optician, described a confusing and harrowing situation from the day before. He said he and his co-workers noticed that police had closed off the street. Mr. Legato briefly locked the door until he felt he and his customers were safe from harm.

“It’s kind of crazy,” he said. “You tend to think it’s getting bad here, but it’s kind of bad all over.”

On a nearby park bench, Mike Adams, 32, wondered whether the nation’s spike in violent crime — as well as the recent mass shootings — were somehow connected to an American moment marked by racial and political strife and general anxiety.

“I think you just have a bunch of angry people around,” he said.