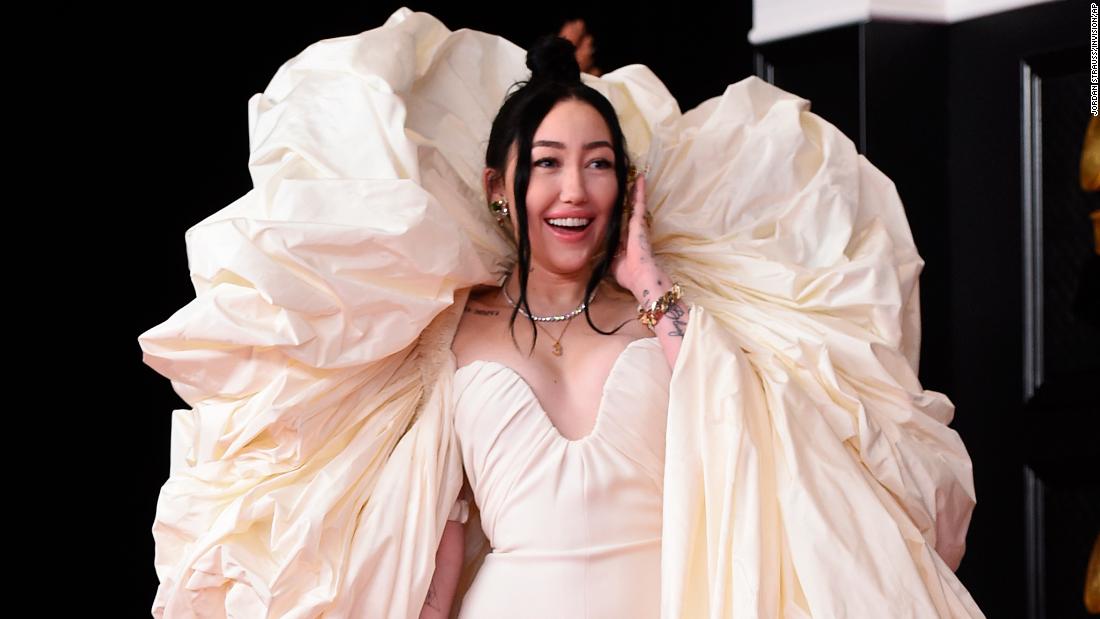 But, as ever, the music awards’ style was brighter, bolder and more colorful than most of its film and TV counterparts.

While many nominees watched from home, performers and award presenters arrived in person at the Los Angeles Convention Center. And they weren’t about to miss a rare opportunity for a red carpet moment.

Noah Cyrus, nominated for this year’s best new artist award, produced perhaps the most meme-worthy moment of the night in Schiaparelli Haute Couture. On social media, the singer — and younger sister of Miley, herself a former Grammy nominee — drew comparisons to everything from an enormous oyster and a duvet, to a crumpled-up tissue and a cauliflower.

Elsewhere, floral motifs hinted at rebirth and renewal, with Taylor Swift opting for a gown embroidered with a veritable bouquet of flowers (and a matching face mask). Anderson Paak and DaBaby also rocked floral tailoring, while Jacob Collier opted for a bright flowery shirt under hot pink suit.

He was one of a number of stars to wear pink, which ranged in tone from Debi Nova’s eye-popping gown and Jhene Aiko’s voluminous number. Brother-and-sister Finneas and Billie Eilish also went for differing shades of pink, the former with a dandyish ribbon tie and wide lapels, and the latter in a boxy patterned shirt and matching pants, mask and bucket hat.

Dua Lipa, nominated for six Grammys including the prestigious record of the year, was the embodiment of glamour, arriving on the red carpet in a shimmery floor length gown with a butterfly motif by Versace.

The spring palettes occasionally ventured into fluorescence, one of the standout trends at last year’s Grammys thanks to the likes of Lil Nas X and Billie Eilish. Megan Thee Stallion arrived in a bright orange Dolce & Gabbana gown, complete with a giant bow and thigh-high slit, while triple-nominee Doja Cat opted for a daring Roberto Cavalli gown that started as a moto-inspired leather jacket with a plunging zip, and ended with a green neon feather train.

Phoebe Bridgers arrives to the Grammys in a signature skeleton suit, this one by designer Thom Browne. Credit: Jordan Strauss/Invision/AP

The menswear was a little less adventurous, with host Trevor Noah in Gucci among the stars opting for a no-frills black-tie. But there were flashes of fun too, from Bad Bunny’s beanie with — true to his name — playful pointy ears, to Harry Styles’ feather boa, which he paired with a Gucci leather suit to open the ceremony with a performance of “Watermelon Sugar.”

One of the night’s best-dressed ensembles, BTS, meanwhile arrived in coordinated Louis Vuitton looks, which ranged from tie-wearing formality to a tan-colored hoodie and white sneakers.

This story will be updated throughout the evening with more of the awards’ best fashion moments.